Fire Rock, which got the casino ball rolling, marks 11 years 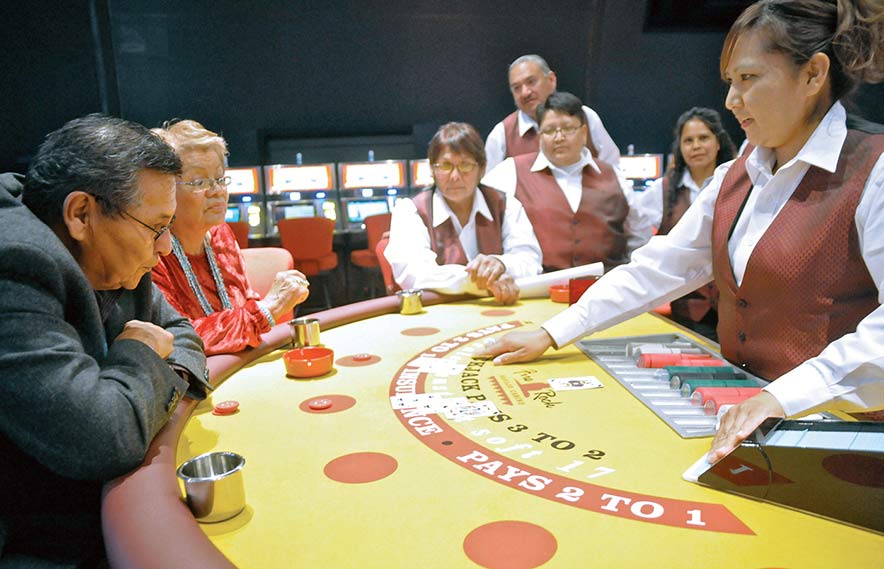 As expected, Fire Rock Navajo Casino drew heavy crowds Tuesday as it celebrated its 11th anniversary as the first casino started by the Navajo Nation.

The date was Nov. 19, 2008, when the casino, located in Church Rock just east of Gallup, opened its doors for the first time.

No one knew for certain just how popular the casino would be. After all, Navajo voters during the past decade had gone to the polls twice and voted against opening casinos.

But the Navajo government got around this rejection by figuring that the ban only applied to chapters that voted against casinos. There was nothing stopping the government from going ahead with plans to build a casino in chapters that supported the idea.

And Church Rock was a major supporter, given the promise that chapter members would be given priority in filling the several hundred casino positions. Tribal officials also dangled the possibility that the chapter would be given a small portion of profit from the venture.

The tribe’s president at the time, Ben Shelly, was not a supporter of the project, saying he was afraid that the casino’s success would depend on patronage by tribal members and he feared this would ultimately have an adverse affect on a lot of Navajo families who already were having a hard time making ends meet.

The opening day drew thousands of people, mostly Navajo, who wanted to see what the casino looked like and have a chance at playing the slots.

The crowds were so big that throughout the day the place was packed to its limits and security had to monitor the crowd numbers, leaving hundreds outside waiting to get in.

The first few months continued to see huge crowds and on weekends casino security had to monitor the number of patrons inside the building to stay within the number allowed by the fire department.

The demand was so great that within a few months, the casino was expanded to allow space for a couple of hundred more slot machines. The casino’s parking lot was also expanded.

Those buses also increased the number of non-Native patrons, something officials of the Navajo Gaming Enterprise was under pressure to do since Shelly’s prediction turned out to be accurate.
More than 90 percent of its customers were members of the Navajo Nation.

The number of Native clients was staggering, especially on Navajo Nation paydays and the first of the month when welfare checks came out.

The casino, according to figures provide by the state gaming office, was bringing in more than a million dollars in revenue every month. Businesses in Gallup catering to the reservation began seeing sharp declines in sales.

Earl’s Restaurant, a popular eatery, saw its business go down by a third the first year the casino was open. Another third disappeared in the following years.

Car dealers reported more repossessions and payday loan companies began springing up all over town as many Navajo families struggled to meet their expenses.

A lot of this was blamed on Fire Rock Navajo Casino but it turned out that the main reason was the national economic slump caused by major bank failures due to defaults on inflated mortgages.

In 2009, Bob Winter, the first CEO of the Navajo Gaming Enterprise, said they hired an independent company to look into the effect the casino was having on Navajo families. The study revealed that the average loss by a customer going to the casino was less than $20 per visit.

While some patrons reported losing much more than this, Winter said the majority of Fire Rock’s patrons looked at going to the casino as an evening of entertainment and restricted their spending accordingly.

“The casino has been profitable from the very beginning,” said Brian Parrish, the interim CEO of the enterprise. He added its profit has been consistent.

This has been viewed as remarkable given the fact that as the national economy continued to get worse other Native casinos were reportedly struggling to make a profit.

Efforts by the enterprise over the past few years to market Fire Rock and the tribe’s other casinos to a more diverse customer base have resulted in the number of non-Native patrons rising to the point, said Parrish, that 65 percent of the clientele at the enterprise’s four casinos are non-Native.

Besides bringing employment to hundreds of Navajos, the enterprise shared some $5 million in profits with the tribe, making gaming one of just a few tribal ventures to give back to the tribe as they were designed to.

Parrish said another fact to consider in Fire Rock’s history is that its success has driven the tribe to build three more casinos.

If Fire Rock had not been a success from the first or even if it had only been a modest success, tribal officials would have delayed construction of the other casinos or maybe even abandoned the idea altogether.

“Fire Rock Casino has led the way for all our properties providing invaluable leadership training and setting the standard for all gaming employees with their passion, dedication and work ethic,” said Parrish.

With the introduction of sports betting at the casino expected in the near future, Fire Rock looks to be even more profitable in the next decade.

Given its continued success, enterprise officials are still looking at expansion in the next several years.

When it was built at its present location, officials said it was a temporary site and there has been some discussion over the years about building a bigger and more permanent casino somewhere else in the area.

There has also been talk of eventually building a hotel to cater to casino guests.