Fabric-ating stories: Diné quilter lets her fingers do the talking 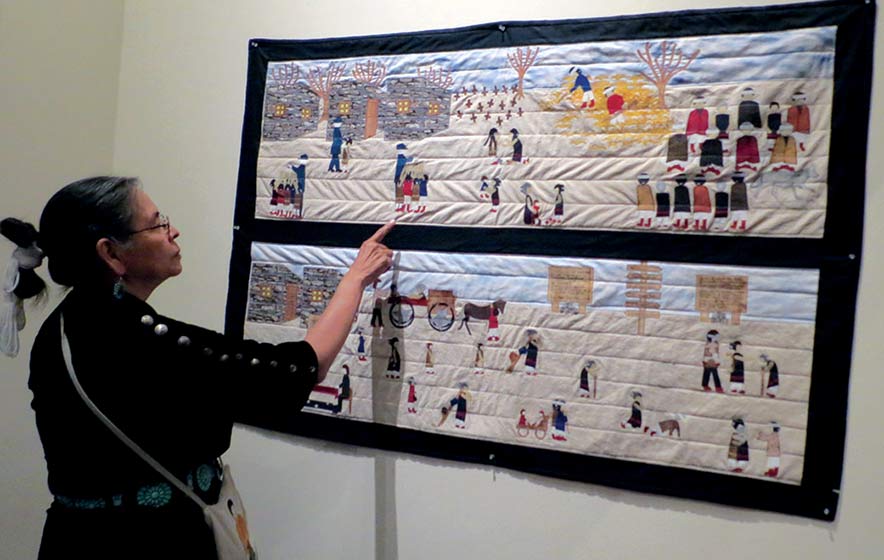 Special to the Times | Colleen Keane
Diné fabric artist Susan Hudson points out scenes in her quilted tapestry depicting the final harsh years at H’weeldi, which was on exhibit at the Bosque Redondo Memorial visitor center June 8 and 9, 2018.

As an employee of the federal government, Susan Hudson is prohibited from taking public positions on government policy.

But they can’t stop her from quilting about it.

“It’s art,” shrugged Hudson, 61, Kin Yaa’aanii born for Desch’íinii, in the Denver hotel room where she was visiting her daughter Saturday. “They can’t say anything.”

Hudson’s art, for those who have eyes to see, contains commentary on past government policy such as the Long Walk and Native American boarding schools. But she’s not afraid to tackle contemporary subjects such as the large number of Native Americans in the Armed Forces, Missing and Murdered Indigenous Women, and the detention of immigrant children from Central America.

It wasn’t always this way. Hudson, who learned to quilt from her mother, who learned in boarding school, at first used her seamstress skills to save money by stitching clothes for her children.

Later, after she became friends with the late U.S. Sen. Ben Nighthorse Campbell, he commissioned quilts from her to use in his numerous giveaways.

It was Campbell who convinced Hudson, when she was already well into middle age, to go from maker of pretty things to, as she puts it, “activist artist.”

‘Too good’ to make quilts

Campbell, a silversmith of some renown, told Hudson she was too good to “go on making star quilts forever.”

“He said, ‘Everyone makes star quilts. You need to find something only you can do,’” Hudson recalled. “I said, ‘Like what?’

Hudson told Campbell she had often admired the “ledger art” made by Campbell’s Northern Cheyenne and other Plains tribes.

“I like how they used their art to tell stories,” Hudson told the senator.

“Why don’t you do that with your quilts?” he replied.

Hudson went home and prayed about it.

Her first effort, in 2011, mimicked ledger art, but in fabric. It was a beautiful tribute to the Plains tribal art she admired, but it had little to do with her personal journey.

In her dreams, she had often seen large groups of people standing or walking: dim, flickering images as though through an old zoetrope.

“First there would be a whole lot of people, then they would move across the screen and be replaced by a smaller group, until finally there was a group of four,” she said.

She figured they were all her ancestors, from Chief Narbona on down, with the last four representing her grandparents.

She got the impression they wanted her to do something more with her life. Maybe this was it: taking her art to the next level.

She decided the first of her new-stage quilts would honor them. She had her daughters, who have beautiful handwriting, write down all their ancestors’ names on fabric and made a quilt representing her family tree.

Stories to tell in fabric

That one, obviously, will stay in her family, but she started thinking of other stories of her ancestors she could tell in fabric. Maybe she could take them to shows. Maybe people would buy them.

She knew she was taking a risk. Everybody loves a well-crafted star quilt, but these new quilts would be statements that might rub some people — specifically the white collectors who pay big money for Native quilts — the wrong way.

The first big story she wanted to tell was of The Long Walk. Three of her great-great-grandmothers had been herded to Fort Sumner; one had escaped.

The quilt that resulted, “Walk of my Ancestors,” took a long time to produce. It was a painful process.

“It made me cry even as I was doing it,” she recalled. “I could hear babies screaming. I could see people falling, just being left where they fell. I imagined their remains still there today.”
A couple of times, she had to put it away. Her ancestors, she said, let her know when it was time to work on it again.

The ancestors, in fact, have been quite vocal since Hudson started this journey. They supply the ideas. When she’s stumped on how to execute a design, they show her in a dream.

After a few initial efforts, Hudson decided it was time to enter some shows and see if her designs appealed to anyone besides herself.

She had heard Campbell talk about the art market at the Heard Museum in Phoenix. She applied, and to her surprise, was accepted. To her further surprise, she won second place in the quilt division, right behind acclaimed Mohawk quilter Carla Hemlock.

Most first-time entrants at the Heard would have been ecstatic over a second-place finish, especially against such tough competition. Not Hudson.

“I’m naturally competitive,” she said. “I could see Carla was the one to beat, so I started studying her work. She was my inspiration to do better.”

“Every award I won, I raised my prices,” she said with a smile.

She knew she had “started to make it” when, in 2012, Cowboys and Indians Magazine named her one of its “Best of the West.”

Museums started purchasing her work for their collections. Magazines and newspapers came calling — there are quite a few Native quilters, but being a Navajo in an art made usually associated with Plains Natives made Hudson a unicorn. She was asked to do presentations at museums and fiber arts gatherings.

Last year, Hudson was asked by the Heard to make a quilt for inclusion in its newly renovated boarding school exhibit.

This was bittersweet for Hudson. Her mother, Dorothy Wood, who had learned to quilt in boarding school, was dying of cancer, and probably wouldn’t live to see her daughter’s project installed at the famous museum. And because she was taking care of her, Hudson didn’t know if she would have time to complete the project.

Sure enough, Dorothy passed away about four-and-a-half months after Hudson accepted the commission. But she and her siblings are forever honored in the piece, which includes six little chalkboards with their names inscribed.

Hudson took her last stitch on the emotional project this past New Year’s Day. When it came time to install it, she loaded her two surviving uncles in the car and took them with her to the Heard, where they became instant celebrities.

“At first, they were confused by all the cameras,” Hudson recalled. “But then, every time they saw a camera, they started posing.”

This month, Hudson won her two latest awards: the Jackie Autry Purchase Award and the Judge’s Choice Award at the Autry Museum of the American West.

Also this year, she got a call from PBS’s award-winning “Craft in America” show, which will feature her in a couple of weeks.

She took the camera crew to the home of her grandmother, master weaver Mary Ann Foster, and up to her brother’s sheep camp above her hometown of Sheep Springs, New Mexico, where they butchered a goat.
“I wanted to them to see where my art comes from,” explained Hudson. “I wanted them to feel a little bit of culture shock, which I think they did, especially when they saw the outhouse!

“You know, the world could care less about us,” she said. “To sit there and tell my story for national television, to tell my ancestors’ story, to acknowledge their pain, all that they went through, and that I can be here to honor them … it was a great experience.”

Dedicated to the future

If her art is rooted in the past, it is dedicated to the future. Her grandchildren are her business partners and often accompany her to shows.

While Rachel, 16, is a budding artist in her own right, 11-year-old Ben has the brain for business.

“The secret,” confided Ben, who was also on the Denver trip with Rachel and their mother, Gem Labarta, “is to offer them deals.”

He put air quotes around the word “deals.”

Hudson recounted one show where Ben made a sketch and put it up for sale amid his grandmother’s quilts. A bilagáana woman offered him a dollar.

“The price is a hundred dollars,” sniffed Ben. “My grandmother’s famous.”

Eventually, a European tourist offered to trade a Swiss chocolate bar for the work.

“Make it three,” countered Ben. “One for me, one for my sister and one for my grandmother.”

The tourist complied and walked away happy.

As Ben was stuffing the chocolate into his backpack, Hudson queried, “Where’s my piece?”

Ben eyed her shrewdly. “Who did the negotiation, Grandma?” he asked.

Hudson recently bought Ben a sewing machine and is teaching him to quilt — and not just star quilts either.

After a person in a Colorado border town made a racist comment that left the boy shaken, Hudson encouraged him to collaborate with his sister on an art project inspired by the experience.

Is there a new generation of activist artists coming up?

As for Hudson, at an age when most people are slowing down, she’s nowhere near finished.

In addition to the several ideas for quilts that are swirling around her head at the moment, she has other plans.

“I’d like to write a grant and find out where all those quilts that the boarding school kids made ended up,” she said. “I’d like to find the women who made them, who are grandmothers now, and let them tell their stories.”

She also enjoys doing presentations and might start her own line of patterns and fabric, maybe teach a class.

She’s also part of the Navajo Quilt Project, which collects material to donate to senior centers and elderly quilters.

“Every day, I ask myself, ‘What did I do today to make my ancestors proud?’” she said.