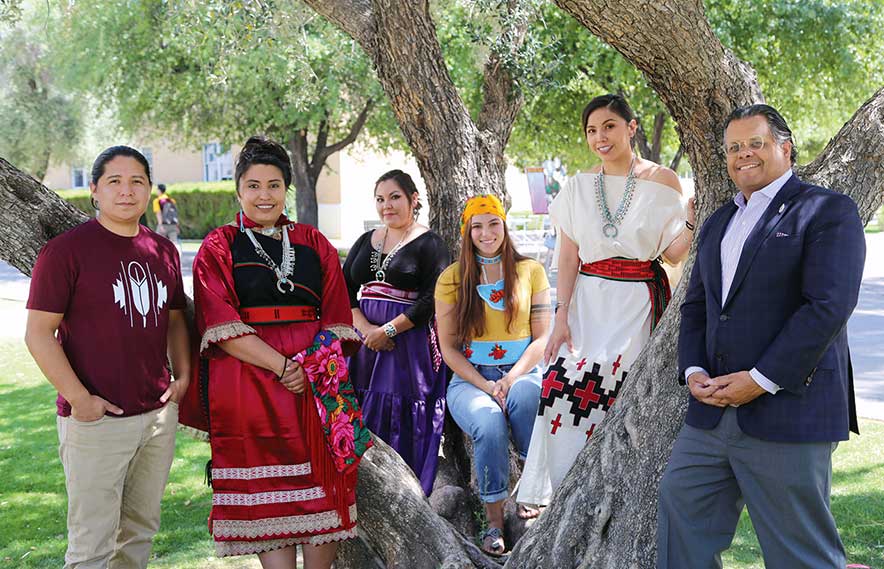 When Taylor Notah first started at Arizona State University, she felt like she didn’t belong.

Notah was a student at the Walter Cronkite School of Journalism and Mass Communication where she was studying to be a reporter.

“A lot of the stories I was pitching no one really understood but then when I came to ‘Turning Point’ it was basically everything about Indian Country,” Notah said. “It was a really great connection after I found ‘Turning Point.’”

Notah, a graduate of Cronkite, is now the editor of “Turning Point” which is a Native American college magazine at ASU.

The magazine focuses on Native students who share experiences and informs students about resources available for them.

“As a Diné woman, as a college student, I did feel the notion of invisibility,” she said. “I not only had to correct some classmates on misconceptions but also professors. I think when that happens you’re basically teaching ‘Indian 101.’ It can be really exhausting.”

The magazine was the brainchild of Amanda Tachine and Bryan Brayboy, both professors at ASU. They surveyed several Native students and found that most didn’t know how to access the resources they needed to be successful on campus.

“I really didn’t know what was on my campus because ASU has four different campuses,” Notah said. “I just felt like I didn’t know what was available to me. Didn’t have that many mentors.
“I would say the first three years of my college experience was just me navigating college by myself,” she said.

The two professors, Tachine and Brayboy, decided to create the magazine as a way to inform students and to give them a voice on campus.

“The magazine is there to help guide them through their college experience,” Notah said. “More institutions need a resources where students are able to share their story and finally have their voice heard.”

The feedback from students and the administration has been positive. This past year the magazine brought back two awards from the Native American Journalist Association’s national contest and was selected as one of the top three publications produced at ASU.

“It’s a product of the students,” Notah said. “If it’s winning awards then Native college students really have something great to say.

“We really take great care with sharing our students’ stories and we really put a lot of passion and detail into just presenting it to everyone,” she said. “So to have it recognized is recognition for our students.”

The magazine has also helped Notah grow as a reporter, mentor and editor. Notah describes herself as shy and being the editor of the magazine has really challenged her to push pass this.
“At first it was definitely scary,” she said. “Along the way I definitely became more comfortable and more empowered by this particular role.”

Danielle Lucero, a contributing storyteller, cartoonist and occasional copy editor, talks fondly of Notah and all that she has learned from Notah.

“I didn’t even know how to ask for resources or how to ask for clarity on what can you do to support Native students,” Lucero said. “Our editor is really good at doing that and she’s taught me how to do that.”

Lucero, from the Pueblo of Isleta, is a third year doctoral student in the justice and social inquiry program studying Indigenous citizenship and how Native nations will define citizenship in the future.

Being a part of the magazine has helped Lucero make her research accessible to all Native folks and communities.

“It has the possibility of reaching outside of ASU and being a support system offering resources, sharing stories for Native students across the world, really, but especially for Native students who don’t have a strong Native community on campus,” Lucero said.

This is why Lucero, after three years, continues to stay involved with the magazine. She also uses her role as a way to translate her research into a narrative that everyone can easily understand.

As a scholar, Lucero writes for other researchers which is very different than writing for the community.

“‘Turning Points’ has really helped me learn to be a better scholar because I’m able to communicate research I’m doing, things that I’m learning, in a way my family and community understands,” she said.

“That’s not to say they wouldn’t understand the high theory but academia is not supposed to be accessible and it was never meant for me, or for my family or my community,” she said.

“So, to some extent, ‘Turning Point’ is helping me and arms me with the experience and knowledge to be able to bring the Ivory Towers to my community,” she said.

The magazine has also become a hub for Native folks to create community. Before joining the team, Lucero didn’t have the opportunity to work with a majority Native women-led organization. This has been invaluable for her as a student at ASU.

The team atmosphere has been really beneficial for Lucero.

In the future, the editor of the magazine would like to grow from 26 pages to more. Notah would also like to see the publication expand to possibly  include other universities.
Information: medium.com/@turningpointsmagazine