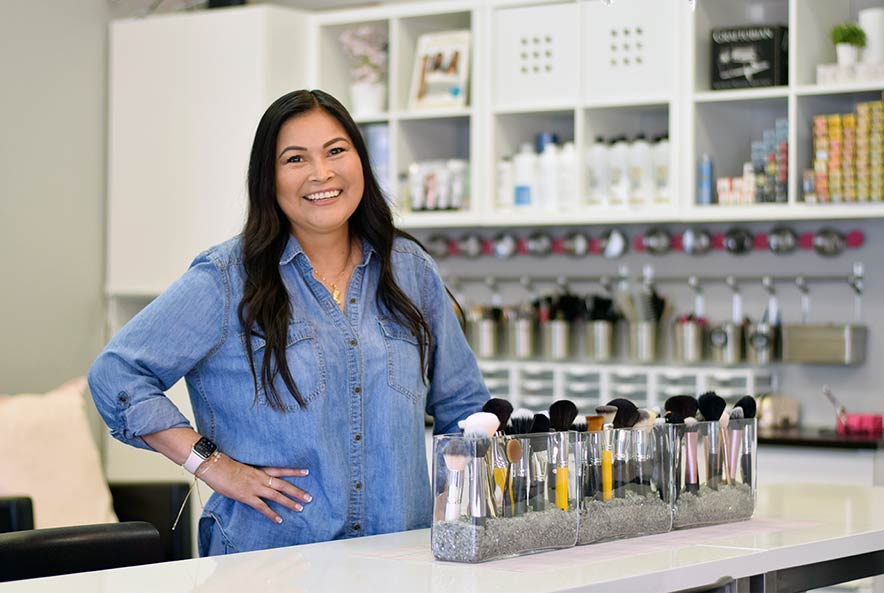 A customer who had just moved to Flagstaff came into Christine De Angelis’ hair salon after finding the business online doing a quick Google search. The customer wanted a new cut and color. De Angelis made time for a quick hair consultation even though her business is by appointment only.

De Angelis exudes confidence as she tells the customer what would and wouldn’t work for her already processed hair.

It’s difficult to imagine De Angelis doing something other than being a successful business owner and hair stylist. But she was.

For 15 years, De Angelis’ job was raising her three children as a stay-at-home parent — a job that taught her how to be an organizer, detail oriented, a problem-solver and interior designer. All these skills would help her later on in the most unexpected way.

“Once they were all in school, I was, like, oh my god, I can’t be home with the dog every day,” De Angelis said with a laugh. “I thought it would be fun to go out to lunch with my friends and go shopping every day but that gets old pretty quickly.”

One day, she was talking to her friend who was a hairstylist about trying to figure out what she wanted to do next. Her friend suggested De Angelis go to beauty school and learn how to cut hair. It would offer her a flexible schedule that would allow her to still make her family a priority. This was the allure of it.

“Without thinking I just drove right down to the beauty school thinking I would look into it and next thing you know I walked out as student,” she said.

Later that evening, De Angelis told her husband about going to beauty school.

“He was so shocked because he said, ‘You never even talked to me about cutting hair before,’” she said with a smile.

De Angelis had never thought about becoming a hairstylist until the day she signed up for beauty school. As De Angelis journeyed through her program, she realized how her skills as a stay-at-home parent translated well into her studies. What was difficult for her peers to grasp came easy to her.

“If somebody showed me how to do something, I could pick it up instantly,” she said.

Eventually, she became a hairstylist at the best salon in Flagstaff, which was Aveda at the time.

The first paycheck she earned in over a decade was for $300. She remembers holding that paycheck in her hand and feeling proud.

Now she knew that if anything happened to her husband, who was the primary breadwinner, their family would still be OK.

But it didn’t end there for her.

Her business would expand into Flagstaff Face Painting, Flagstaff Tanning, Flagstaff Eyelash Extension and Flagstaff Tuxedo that she recently closed because she didn’t have enough staff to run it.

Her journey toward success was a lifetime in the making. De Angelis grew up in Palm Springs, California. Her mother is Navajo from Tuba City and her father was Hopi from Lower Moenkopi. He died in the Vietnam War.

De Angelis’ mother eventually remarried to an attorney turned stockbroker who moved the family from New York to Connecticut before settling in Palm Springs where he worked with retired movie stars like Zsa Zsa Gabor, Priscilla Presley and Bob Hope.

This is where she learned about business and investing in the stock market.

“I think of business first before creativity,” she said.

This mindset has served her well as a businesswoman. Starting her own small businesses, she realized quickly that 80% of her job was business and the other 20% was creativity.

She added being a makeup artist to her skill set after a bride came into the Aveda salon one day and none of the other employees wanted to do her hair or makeup.

So De Angelis stepped up and created a look that the bride loved. This was her first time doing makeup professionally.

From there, she started taking makeup classes taught by an up-and-coming makeup artist, Mario Dedivanovic, in Los Angeles.

Also in her makeup classes were budding YouTube beauty gurus like the controversial Jeffrey Star who now owns a makeup brand that’s worth $1.5 billion, according to Star.

Being around and meeting successful people has always been a priority for De Angelis.

“Don’t take advice from people who aren’t successful at what they’re talking about,” De Angelis said. “I live by that.”

She has a keen ability to keep a net of successful business owners, makeup artists and hair stylists around her. She taps her Hollywood contacts when she needs advice on how to do makeup on-location in places like the bottom of the Grand Canyon, which she rode to in a helicopter.

Some of De Angelis’ friends are the most successful business owners in Flagstaff whom she seeks advice from but at the end of the day, she says without hesitation, she makes the final decision.

Her biggest hurdle to overcome was learning how to run a website and use social media for free advertising. It’s shocking she didn’t mention COVID-19 as a hurdle but it hasn’t been for the small business owner.

Her wedding business suffered a lot but the hair salon made up for it almost entirely since Arizona allowed businesses to open.

“They came back in droves,” De Angelis said. “We just got through our waiting list.”

She also filled out the paperwork for the Paycheck Protection Program through the CARES Act and was one of the recipients. She also applied for the Small Business Administration Loan and received that as well.

Before all of this happened, her family went through the 2007 stock market crash and the subsequent 2008 recession which hit her family hard.

“I wasn’t prepared for that,” De Angelis remembers. “At the time we were building a home here in Flagstaff and we owned a second home in Austin which we were living in. We had to short-sell both those homes. That was devastating.”

She never thought her family would have to go through such a huge financial crisis that would affect how the family lived.

“I learned a big lesson that you always have to make sure that you have the finances in case an emergency of that realm happens again,” De Angelis said. “So when COVID happened I knew I would be personally fine because I had prepared for that within the 10 years since (the market crash) happened.”

So, ultimately De Angelis weathered the pandemic well and her business continues to thrive. The only thing that worried her were her “girls,” referring to her employees.

Since the state ordered the closing of businesses, she wasn’t able to keep her employees working. De Angelis helped them apply for unemployment and assured them she would be there for them throughout the pandemic.

“I will make sure you can eat and you can pay your bills,” she remembers telling one of her employees.

Now, as things begin to go back to normal, the only issue De Angelis runs into is having customers wear masks and telling people they aren’t allowed to bring guests with them during their appointments.