Former roller derby skater spins her wheels for a cause

Like so many entrepreneurs across the country, Daisy Purdy of Flagstaff watched the COVID-19 pandemic strangle her consulting business, Inclusive Community, down to practically nothing.

She tried being good and staying home, thinking it was a good chance to work on her dissertation for her second doctorate. But she soon learned she was the kind of writer who needed a distraction.

It would have to be something as meaningful as her day job, in which she helps “connect talented professionals with diverse clients,” according to Inclusive Community’s website. The 41-year-old Anglo/Eastern Cherokee also wanted to help a local Indigenous community. And her project would have to be something “where I wouldn’t be breathing other people’s air,” as she has no desire to catch COVID-19.

Her eyes fell on her old roller skates. Eight years ago, she had been an active participant in the Flagstaff roller derby scene (yes, there is one). But she hadn’t skated for four years.

Still, it’s like riding a bicycle, right? A crazy idea crossed her mind. What would it be like to skate across the country? Googling around, she found a few people who had done it on in-line skates, but not the four-wheeled “quads” that are used in the rink. 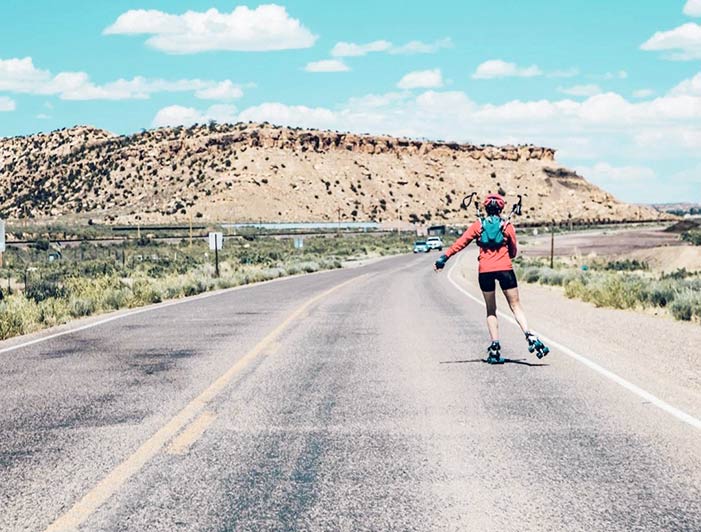 Courtesy photo
Daisy Purdy of Flagstaff has skated more than 2,000 miles to raise awareness and money for her colleague Tommy Rock’s water research.

“Most people take a year to plan this kind of thing,” she told the Times from Elizabethtown, Tennessee, where she had landed last Thursday. “I put it together in two weeks.” Purdy decided she would skate from the Navajo Nation to her home reservation in western North Carolina.

She wanted the epic journey to raise money and awareness for a cause, and she chose her friend and colleague Tommy Rock, an environmental scientist studying water contamination on the Navajo Nation. “It’s hard for Tommy to find grants for his research because so many of the large environmental groups focus on the national parks and other public land,” she said, “not reservations.” Plus, his name lent itself to a cool name for her effort: “Rolling for Rock.”

Rock was astonished when he learned of Purdy’s plan. “I said, ‘Are you sure you want to do that?’” he recalled. But as the dollars started piling up, his skepticism turned to gratitude. “It really helps because all the samples I take have to be sent to a certified lab to be analyzed, which costs money,” he said. “I’ll definitely be able to sample more water sources with the money she raises.” He called Purdy “an amazing woman.”

Purdy started out in Lupton, Arizona, June 11 with a few changes of clothes, four pairs of skates, some extra wheels and bearings, and her laptop so she could chronicle her journey on social media and work on her dissertation during her down time. Also her old blind dog, Moo, who was suffering from terminal cancer and hated being left behind during her mom’s adventures.

At first she had a volunteer driver, but “she got tired — I don’t blame her — and went home,” Purdy said. “So now I skate about half the distance I want to cover and then go back for the car.”

Purdy had originally planned on skating 30 miles a day, but she found she can do 50. Not that it’s easy, mind you. “America’s highways are not designed for roller skates,” she sighed. “There’s a lot of debris, a lot of gravel on the roadsides.”

Another obstacle is the summer heat. “A heat wave has followed me the whole way,” she lamented. The worst was Oklahoma, where the mercury hit 118 and the humidity made it feel even hotter.

Recently Purdy has taken to skating in the early morning and after sunset, taking a long break in the afternoons to bandage her blisters, post on social media, work on her dissertation, cook and eat. Sometimes she finishes the day at 2 a.m. She camps in a tent or in her car, always on the lookout for places where she can recharge her laptop. “I’ve learned the little gazebos in public parks often have plug-ins,” she confided. “Also most convenience stores have an outdoor outlet.”

One thing she never factored into her plans was being pulled over by police. It’s happened to her a total of 16 times. “They tell me, ‘You can’t do this,’” she said. “I ask them to show me the policy against it. I’ve done my due diligence; I couldn’t find anything prohibiting roller-skating on a public roadway. I think it’s just a knee-jerk reaction for them; if they’ve never seen it before, it must be illegal.”

The worst thing about getting pulled over is that almost none of the police Purdy has encountered were wearing masks. “I ask them not to get too close to me and they get angry,” she said. “I think the police should be modeling good behavior.”

The only police who wore masks were two African-American cops who pulled her over. “They were both really supportive once they found out what I was doing,” she said. “They helped me find safer roads to use.”

One cop in tiny Duke, Oklahoma, even took her on a tour of Duke’s claim to fame: an entirely underground school built during the Cold War.

For the most part, however, Purdy hasn’t had time to tour around the places she lands; she’s pretty busy answering email and raising awareness about her trip.

So far, Purdy’s quirky fundraising idea seems to be working. The trip’s GoFundMe page had raised $14,373 as of Tuesday, and she estimates she’s raised almost as much in direct donations. Several people who are following her journey have launched “solidarity skates” — shorter roller journeys in their own areas.

“One of the best things to come out of the trip is I’ve met so many Native skaters,” Purdy said. “I didn’t know there was a Native skating community.”

The broader mission, she said, is “to get people to think about environmental injustice and how it affects things like access to clean water.”

Purdy reached Cherokee, North Carolina, last weekend, where she realized Moo was ready to call it quits for good. She did the merciful thing and had a vet put her old friend to sleep.

And as for Purdy, is she ready to end this blistering 2,000-mile journey and put on a pair of shoes without wheels? Heck no.

“I’ve decided to skate all the way to the Atlantic Ocean,” she confided.