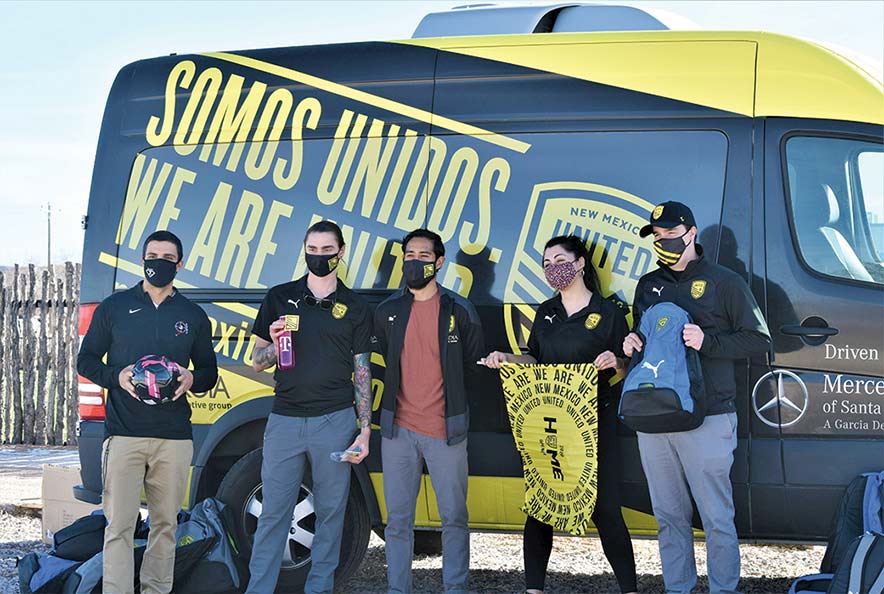 Since March 2020, the project has distributed more than 3,500 wellness kits to Zuni youth, with different themes and contents.

According to Joe Claunch, executive director of Zuni Youth Enrichment, registration for the 100 kits filled within one hour.

David Estrada, a former player with United — now a coach and scout as well as community relations manager for the Somos Unidos Foundation — took extra time to play ball with some of Zuni’s young soccer players.

“The kids were really excited,” Claunch said. “This opportunity was a big deal for them, and some of them cried tears of joy when they found out about it. David is passionate about the sport and working with kids, and he really poured into them — the kids didn’t want to leave.”

Estrada said, “Being able to travel to the Zuni Pueblo in the last stop of our Holiday Tour gave us an opportunity to continue our mission of showing that this team is for all New Mexicans.

“It was beautiful to see some of the kids from the Zuni Youth Enrichment Project wear their United gear with pride,” Estrada said.

During his 11 years as a player, Estrada was named Humanitarian of the Year four times. He supports the Somos Unidos Foundation’s efforts in increasing access to soccer, providing high-level training to youth at no cost to them.

“This spring, when we realized it was no longer safe to bring together large groups of kids, our team quickly adapted operations and our approach to meet the moment,” Claunch said. “Instead of offering large in-person youth programs, as we have for more than 10 years, we pivoted to distributing these wellness kits.”

The organization partnered with 20 funding organizations and hundreds of individual donors to make the initiative possible, and Claunch said the kits are having a meaningful impact.

FARMINGTON – The 4Corners Chapter of the American Petroleum Institute has led the “4Corners API COVID19 Tribal Relief Project” to supply needed health products to Native American communities in the Four Corners region, which have been some of the earliest and hardest hit communities in the nation.

Members of the energy industry in the Four Corners Region contributed more than $60,000, which has been used to procure and distribute more than 15,500 facemasks, 75,000 ounces of sanitizer and disinfectant, 800 cases of bottled water, and other community-health-supporting supplies. Funds were also used to create scholarships for members of Native American communities.

All proceeds from the project have benefitted eight Navajo chapters and the Jicarilla Apache Nation. The majority of the supplies were distributed in the Chaco Canyon region.

Ervin Chavez, president of Nageezi Chapter, said, “I want to express our appreciation to LOGOS, DJR, and the API Four Corners Tribal Relief Project for stepping forward to assist the checkerboard region of the Navajo Nation.

“Our area has been good neighbors with the oil and gas industry for many decades,” he said. “We want to thank API and its members for donating hand sanitizer, bottled water for the safety of community people and portable camping tents, in case an individual family member came positive with COVID19 and needed isolation.”

PHOENIX – Bank of America on Jan. 15 announced that it directed more than $13 million in 2020 to Native American communities across the country disproportionately impacted by the coronavirus pandemic, according to a bank news release.

Among the investments were $10 million to Native American Bank, the only national American Indian-owned community development bank in the country. This is to provide capital for small businesses, affordable housing, schools and health care clinics, and consumer lending needs.

An additional $3.1 million was in the form of grants to nonprofits serving community needs – nearly half went to nonprofits in states with the highest proportions of Native Americans, including Arizona, Colorado, Oklahoma and New Mexico.

The pandemic has increased the need for services and support, the bank said.

“Navajo Nation, for example, has experienced more coronavirus cases per capita than nearly any other place in the United States,” the bank said, “and during the height of the pandemic the rate of infection among the Navajo people was more than eight times the overall rate in New Mexico alone.”

The bank has provided financial services to Native American governments and territories for more than 60 years, and is also the largest investor into CDFIs with more than $1.6 billion in capital.