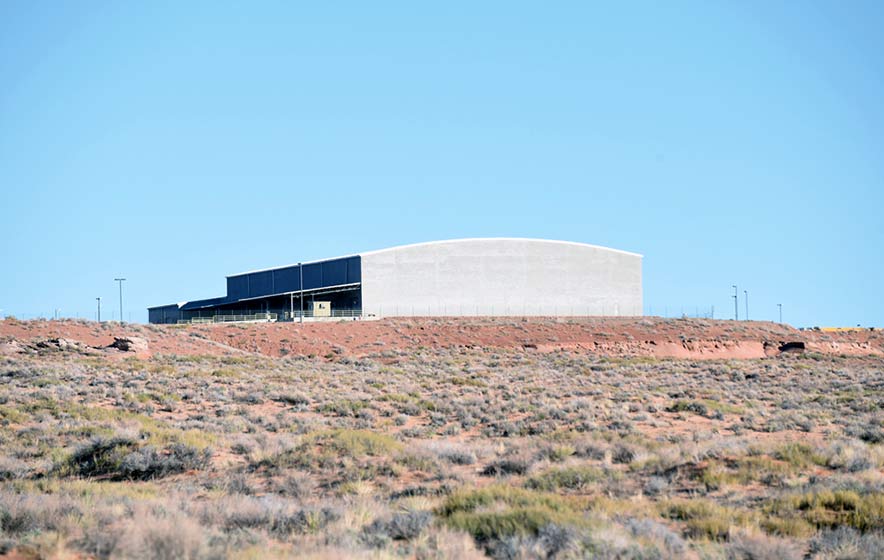 Navajo Times | Krista Allen
The warehouse at Navajo Generating Station is one of the Navajo Nation’s retained assets in LeChee, Ariz. Other assets include the Black Mesa and Lake Powell Railroad, the administration and the maintenance facilities and the lake pump station.

Factory-built steel-frame housing could soon be built on a section of the Navajo Generating Station.

The steel-frames would be made to the exact specifications of shipping containers made by ZenniHome LLC, a new manufacturer that was licensed by the Arizona Department of Housing last year.

ZenniHome manufactures two stackable models of homes that can be used as an accessory dwelling unit, a stand-alone home, or a multi-family product that can stack up to 10 stories, said Bob Worsley, founder of the company.

The finishing inside the steel frame housing is high quality, smart, green and robotic. This would eliminate the need for single purpose rooms and allow “living large in smaller spaces,” he said.

That’s a great idea, but there are so many issues in every direction, said Coconino County District 5 Supervisor Lena Fowler, who on Monday attended a meeting to discuss ZenniHomes.

“You don’t have water, you have to haul water,” Fowler said in an interview. “Generator, power.

ZenniHome on Dec. 15 announced its partnership with the Navajo Nation and the finalization of an emergency operating agreement so that the company would begin manufacturing eco-friendly homes on a portion of NGS.

Represenatives from ZenniHome and the Nation are negotiating a long-term lease agreement.

JT Willie, executive director for the Nation’s Division of Economic Development, told the Navajo Times on Wednesday that the agreement was signed and authorized on Dec. 10.

“This is a two-year lease for expansion into a permanent business-site lease,” Willie said. “The use of a sitting warehouse at NGS has been put into place instead of the building becoming deteriorated.

“The handover was quick due to time, but all the requirements have been met to move the (agreement) forward,” he added. “The company will begin their build-out and manufacturing process.”

Willie said division representatives will closely observe operations as Navajo jobs are created and the output of homes is developed.

Vice President Myron Lizer told the Times that the Nation is in the grips of an escalating housing affordability crisis.

“What if we could build better, faster, and with 30 percent less waste?” Lizer asked. “Especially with rising housing materials cost, now is the time to think outside the box.

“ZenniHome offers the Nation the ability to participate quicker, putting our highly-skilled Diné workers back to work in that region that lost those well-paying jobs with the closing of the NGS,” he said.

“The quick work done by our (Navajo DED) on this project with ZenniHome (CEO Bob Worsley) was crucial in bringing this endeavor to a quicker than normal yes,” he said.