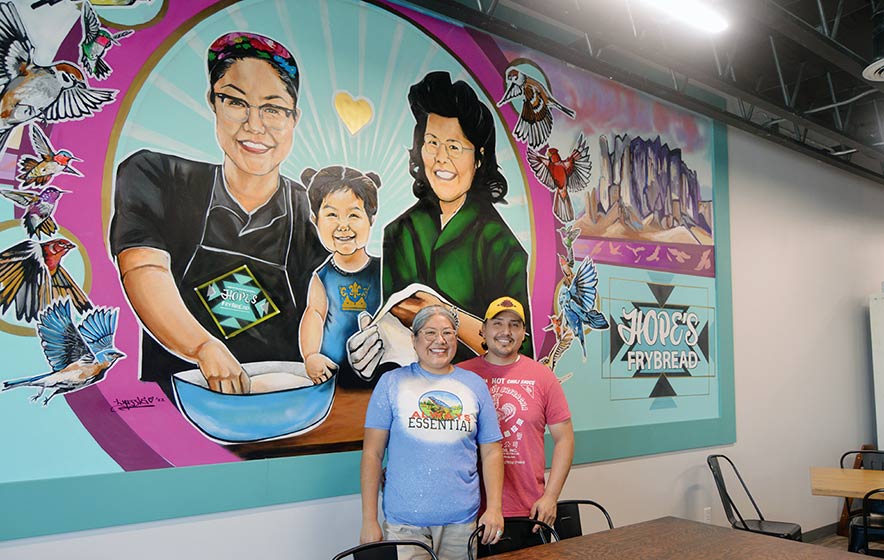 Special to the Times | Candace Begody
Hope and Aaron Peshlakai from Ganado, Ariz., are the new owners of “Hope’s Frybread,” a new restaurant located at 144 S. Mesa Drive in Mesa, Ariz.

When the idea first started to open a restaurant, Hope Peshlakai envisioned the place to feel like home.

“We wanted people to feel like home, where they could feel welcomed and get a good meal,” said Peshlakai, the new owner of Hope’s Frybread, a new restaurant that features Navajo frybread, and Navajo Tacos, among other items.

“We wanted the space to be bright and inviting and have elements of Native culture,” she said.

That is exactly what one gets upon immediate entry into Hope’s Frybread. In addition to the Native-designed backsplashes throughout the restaurant, customers are welcomed with warm smiles from the Peshlakai family, the smell of frybread, but most notably, a large mural by Leandra Yazzie of Blue Gap, Ariz.

“She was who I learned from, her frybread and cooking,” Hope said of her grandmother. “If I could choose anybody in my past, present, or future, I would want my grandmother’s younger self to be in the kitchen with me. That photo was while she was in her prime.”

Hope described the concept to Yazzie and provided a photo of her younger grandmother, and Yazzie went with it.

“I told her I loved birds and that I wanted birds all around us,” Hope said. “They are here to help, to look out for (you). They look like they are actively surrounding us saying, ‘We got you.’”

On the other side of the mural are the red mesas seen in Ganado and the Superstition Mountains – representing the family’s travels from Ganado to the Valley.

When it came to the restaurant’s name, that was a no-brainer.

During their pop-up-frybread-stand days, Aaron once upon a time told his wife, “You’re the one making the frybread, so we’ll call it Hope’s Frybread.”

The couple has come a long way from their days of pop-up frybread stands.

Hope and her husband, Aaron Peshlakai, both from Ganado, were married in 2006 and have had six children – their eldest is 21, and their youngest is 5. Aaron, at the time, was working toward his mechanical engineering degree at Arizona State University.

“Being Navajo, this is how you make money – you put up a Navajo taco sale,” Hope said, recalling the days of being on a strict student budget.

They continued to sell Navajo Tacos, and the proceeds turned into extra spending money for the family.

“We made and sold frybread as a broke college family,” Hope said.

The family eventually began receiving requests to do fundraising events for neighbors and those in need. They were asked to host sales, and they would donate the proceeds to families in need. They were even asked to cater a wedding for a non-Navajo family.

“We saw a lot of love for frybread from non-Natives,” she said, adding that they did some side entrepreneurial hustles to make a little extra money. “For years, we did pop-up catering, but it wasn’t a serious thing until 2019.”

As word got around, a neighbor offered to allow the Peshlakais to use their property for more Navajo taco sales. They had tables, chairs, and tents and wanted the couple to start selling.
In 2019, the Peshlakais catered a Halloween party.

“Tons of people were invited, and we kept getting compliments on the food,” Hope said. “There were even people saying they would invest in buying us a food truck. But we didn’t take it too seriously. We were just excited to have all those people enjoying the food. After that event, we sat down and weighed the pros and cons.”

The couple then began looking into what it would take to start a restaurant. Aaron crunched the numbers, did their due diligence, and the numbers showed some success with a brick-and-motor business.

Eventually, Aaron decided to leave his job at Intel, where he was a mechanical engineer, to open the restaurant with his wife – it has been a labor of love for nearly two years, especially through a global pandemic.

“We were a couple of weeks away from signing a lease for another location, and the shutdown happened,” Hope recalled of the coronavirus pandemic. “Restaurants closed their doors, and we had to put it on the back burner and wait it out, or we would have taken a big hit. We continued to watch trends and how restaurants were handling the shutdown.”

By the end of 2020, things were starting to open back up slowly.

However, the couple was met with new challenges. They had to start back from nearly square one to find a new location that was not only within their budget but allowed them the flexibility to make infrastructural changes while not breaking the bank.

Another challenge they did not anticipate was the supply chain issues caused by COVID-19; everything became much more expensive, so they saved where they could. Aaron did as much of the construction as possible – whatever did not require a license or a contractor.

Looking back, Hope said it is more than frybread – it is about culture.

“I am super excited to share our culture with our food,” Hope said. “I want our food, especially our frybread, to be known as something that is more than fair food or more than carnival food. It is cultural. It feeds families.

“Frybread was created when our people were in Fort Sumner,” she continued. “The process of making frybread, it has fed our people, it gave them meals, and allowed them to survive, and today, it pays people’s bills. It came from a dark history in our lives, but so much good has come from it.”

Looking into the future, Hope said she wants their work to be an inspiration to all, especially those who may not seek or have attained formal higher education.

“I don’t want to knock people who did get their degrees and went to college because my husband did, and he is a big reason why we were able to do this, but I wasn’t able to finish college,” Hope said. “I put that aside to raise my family, but now I am a business owner. I know there are people out there that for whatever reason, they did not get their college degree. But whatever the reason is, they shouldn’t stop pursuing their dreams.”

When you talk about success, Hope defines it differently.

“I love to quote Chief Manuelito – I understand that we want to be on the same playing field as the non-Natives and get an education, but education doesn’t necessarily have to be in the school setting,” she said. “It can be however you gain knowledge, whether it is trade school or figuring it out in your own space, your kitchen, your space of beadwork or weaving. There are other avenues that you can be successful.”

Right now, Hope’s Frybread is a family affair. But eventually, Hope will bring on frybread makers, and they will be “the highest paid.”

Hope’s Frybread had a ribbon-cutting ceremony on Oct. 4, with Mesa Mayor John Giles. The grand opening is set for Oct. 8.

The Peshlakais want to acknowledge the enormous support they’ve received along the way.

“We had a lot of family and friends that helped,” Hope said. “There were times when we would be sitting here looking at the long list of things to do, and someone would walk in and ask how they could help.

“That was always a relief and boost of energy,” she said. “We are really grateful and blessed for that to have their helping hands through the process. We want to say a special thank you to them – they know who they are.”

The restaurant is located at 144 S. Mesa Drive, Suite E in Mesa. Hope’s Frybread is also on Instagram.