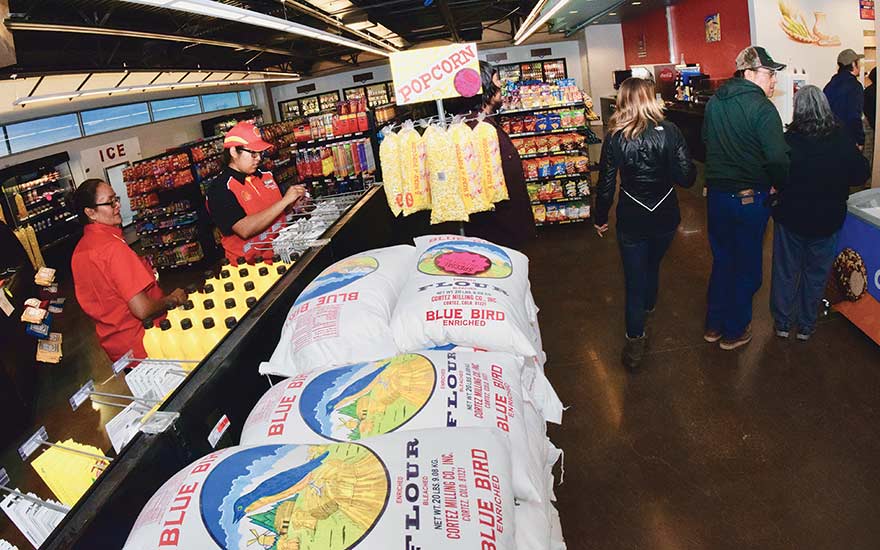 Special to the Times | Krista Allen
People tour the new Dennehotso Market as new employees tidy up the place during a grand opening celebration in Dennehotso, Arizona, on Feb. 15.

Vera Begay, Dean Richards, Rueben Richards, and Evelyn Singer laughed and told stories as they ate outside Charley Biggs’ Chicken ’n’ Sauce inside the new Dennehotso Market on Feb. 15. The four grew up together but they haven’t seen one another for years nor sat around a table to eat and mingle.

Rueben says that is what their elders used to do – gather and socialize outside the old Dennehotso Trading Post, which was built in 1920 and served as a bank, post office and social hub. Trading posts back then were the only point of contact with the world beyond Diné Bikéyah.

“A lot of people used to come from surrounding communities just to do what we’re doing – talking,” Rueben said. “They used to sit around under the cottonwood trees … outside the (trading post).” Begay says that’s a tradition they’re going to bring back since the new market also has a small diner, gas station and laundromat next door. “We ran into so many people that we have not seen for a lot of years,” Rueben said about the new store’s grand-opening celebration.

“Gas is here. We don’t have to go to Kayenta, Mexican Water and Farmington (anymore) to do our laundry and get groceries.”