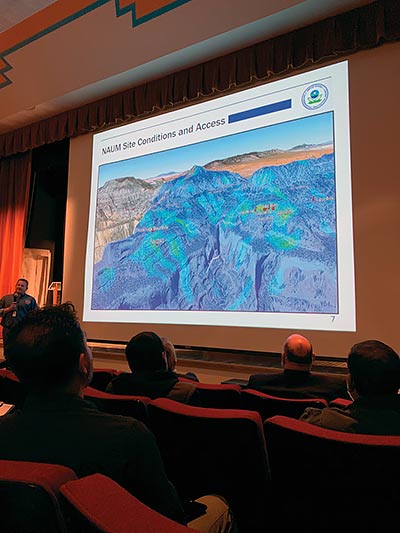 At an “Industry Day” for prospective Environmental Protection Agency contractors, the audience views a slide showing abandoned uranium mines near Cove, Ariz., that need to be remediated. The yellow areas are radioactive tailings that need to be removed. The mines are on steep slopes and will be hard to access, USEPA personnel said.

During the Cold War, some 30 million tons of uranium were dug from the Navajo Nation and surrounding areas.

At today’s prices, all that uranium would be worth about $1.6 trillion.

Of course, the Navajo Nation and the miners who dug up the ore only received a small fraction of that, and when the boom ended in the early 1980s, the Nation was left with health problems and a scarred, radioactive landscape.

Now there’s a second uranium boom of sorts. The Nation and the U.S. government, after suing and settling with the mining corporations still in existence, have $1.7 billion available to clean up many of the abandoned uranium mines and mills the companies left behind.

It seems only fair that most of the people and companies being paid to clean up the mess be Navajo, but as a government agency, the U.S. Environmental Protection Agency can’t use Navajo preference when awarding contracts. It can, however, require its contractors to commit to hiring Navajos or Native Americans whenever possible, which is what it has done.

So far, the biggest contract awarded — $85 million — has been to Pasadena-based Tetra Tech.

The environmental engineering giant, which made $2.96 billion last year, is charged with “response, assessment and evaluation” on 54 of the 523 abandoned uranium mines and mills on and around the Navajo Nation.

It is basically USEPA’s agent for the assessment of the mines left behind by Kerr-McGee, which were since bought out by Tronox, explained Michele Dineyazhe, a remedial project manager for USEPA assigned to the Navajo Nation Superfund Program.