Rebecca Jones (she/they) and Cody Fetty (they/them) are Native jewelry artists who have been navigating the sale of their art online through Instagram during the COVID-19 pandemic. 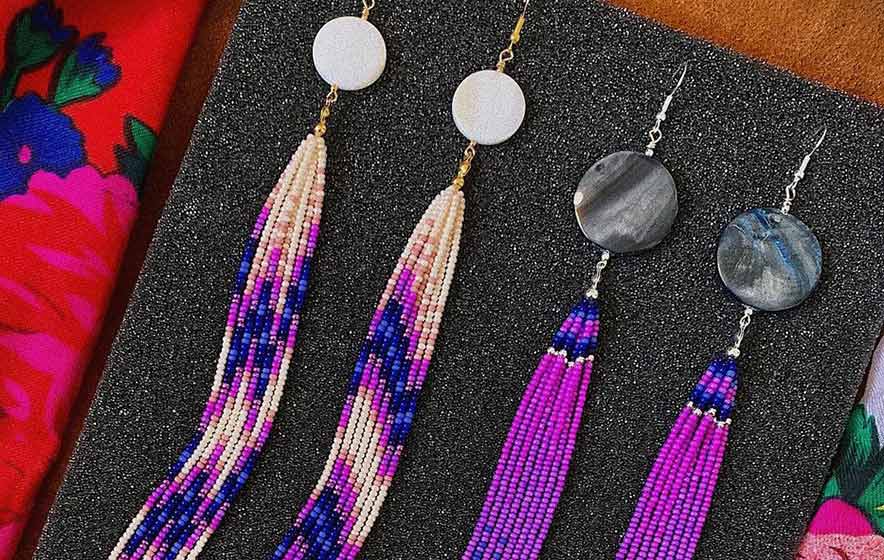 Jones and Fetty said they have had more positive impacts than negative running their businesses on Instagram.

One positive impact when during the summer of 2020 when the Black Lives Matter movement took place, they decided to do virtual mutual aid work.

“A lot of the funds and the crowdfunding was directed to Black-led organizations and Black-trans organizations,” Fetty said. “My jewelry account got a lot of attention in that way.

“Just like making pieces to auction off and then whatever was made from the auction would be directly donated to those organizations,” they said.

Selling online has its downfalls and one is the lack of in-person events at which to sell.

Jones said with online selling they do not meet people and must charge for shipping and handling. This involves more labor than in-person selling.

“Taking pictures, then posting online, and then selling online, I feel like it does take a lot out of you because you’re staring at your screen for like a couple hours or more,” Jones said.

However, since this past summer, Jones has been transitioning back into doing in-person sales in the Albuquerque area.

“After getting vaccinated and also just following the COVID precautions here in Albuquerque, I’ve been able to do more in-person events, which has been nice because I miss talking to people, seeing people, and people can see the jewelry in person,” they said.

Fetty, on the other hand, has not sold much in person and prefers to sell online.

“I like to make my jewelry the most accessible to people, especially out on the rez, they can’t come to like Flagstaff just for a craft bazaar because they have to think about gas, mileage, and just have to plan their whole day around it,” they said.

However, one of the negative impacts Fetty has experienced with online selling is many people who live on the rez do not have access and reliable internet.

“People who still live on their rez, who want to purchase jewelry online, either their message is still pending, or it just doesn’t get sent because they don’t have clear access to the internet,” Fetty said.

Despite the downfalls to selling jewelry virtually, both Jones’ and Fetty’s businesses have benefitted since they’ve been doing great, revenue wise.

Another positive impact the pandemic has had on their businesses is they feel like they have been given more time to create.

“With COVID, I’ve been able to exercise my creativity a lot more,” Jones said. “I was furloughed at my regular job, so I was working less hours and with that I was able to just focus a little bit more on being more creative with my jewelry, with my music.”

Fetty said they feel like they have been able to produce more jewelry because of the pandemic which has been good for financial stability.

Jewelry making plays an important part in both Jones’ and Fetty’s lives, however, it shows in different ways.

Jones said it’s important because she can network, share her ideologies and political views, and connect with other Indigenous people across the world through her jewelry.

“I like sending the medicine jewelry to other relatives across the whole world, to other Indigenous people,” Jones said. “I feel like that’s super important and with the pandemic.

“There’s been a lot of Diné folks or folks in the Southwest who utilize our medicines down here who are living in Portland and New York and they’re really thankful to get a piece of jewelry that has like cedar in it which makes me happy,” she said.

Fetty uses jewelry making to connect with their grandma and mom. They said both their mom and grandma have been making jewelry since they were a baby.
Their grandma used to work at a bead store in Flagstaff before retiring and making jewelry full time.

“I remember her telling me as I was getting older that I can make jewelry as something to fall back on,” Fetty said. “My grandma had like really great confidence in me that I could do it, so I think that why it’s (jewelry making) important to me is that generational connection.”

“From my experience, doing sales here in Albuquerque versus doing sales in the rez, sometimes I see a lot of Native artists kind of sell themselves short,” Jones said. “They do really great craftwork but then they sell it at a price that they have been selling it for like 20 years and I feel that our prices should be competitive with each other because there’s inflation everywhere.”

She feels all the “flea market aunties” should work together and be competitive with their prices to the point where people should expect to pay a certain amount for jewelry.

Fetty holds the same opinion and said they often see other Native jewelry makers express gratitude when they receive a big following on Instagram and sell their art.

“It’s really not just treated as a commodity,” they said, “it’s really like a give-and-take situation in a community aspect way – you’re supporting your community and you are helping them financially especially in Native households.”