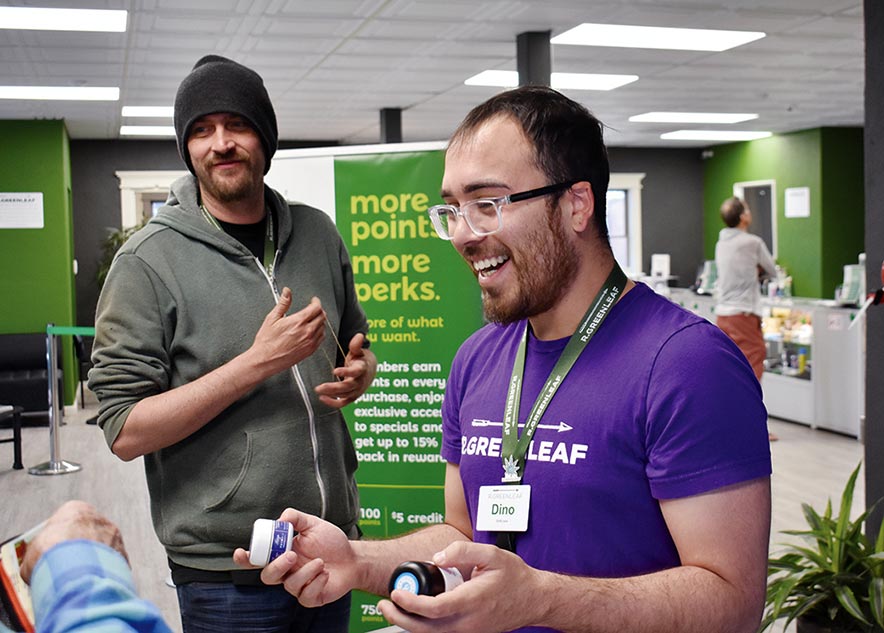 With the retail purchase of adult-use recreational marijuana now legal in the state of New Mexico, cannabis sales kicked off with a bang on opening day last Friday, April 1.

“I was definitely taken aback by how many people came in on our first day,” said cannabis salesperson Nathalie Nichols at Fruit of the Earth Organics in Santa Fe. “A lot of people were saying they’ve been waiting for this for 20 plus years.”

Overall, New Mexico recorded a whopping $5.2 million in sales over the three day weekend, April 1 to 3, which included $1.7 million in medical and $3.5 million in recreational cannabis sales, with a total of 87,773 purchases across the state, according to information provided to Navajo Times by Heather Brewer at the New Mexico.

“It was amazing!” said Delora. “We had a line out the door. There was a constant flow of people. We had a DJ and food truck, so it was really cool.”

Greenleaf Organics customer Gustavo, who did not want to share his last name, said now that cannabis is legal, being able to buy it in a store safely brings relief.

“It’s more normalized, which is a good thing,” said Gustavo. “You get to enjoy places like this and learn what type of marijuana is being grown and distributed in New Mexico. It brings a lot of opportunities for people who are really into it.

The state issued 151 retail licenses in advance of Friday, said Brewer, which cover about 250 locations around the state.

Gov. Michelle Lujan Grisham, who celebrated the “historic” opening day by visiting a cannabis store in Albuquerque, said with licensed retailers “ready to go” on day one, New Mexico’s newest economic sector is off to a strong start.

On Saturday, Lujan Grisham reported that with over $2.7 million in total cannabis sales on Friday, it’s safe to say that the demand for New Mexico’s newest economic industry is “high,” no pun intended.

“With the dedicated work of legislators and advocates, we have crafted a well-regulated industry that is creating jobs, spurring economic activity, and generating (tax) revenue for state and local governments,” she said.

The Cannabis Regulation Act, passed by the Legislature and signed by the governor last April, legalized adult possession and personal growth as of June 29, 2021, and called for sales of adult-use cannabis to begin no later than April 1, 2022.

The new industry is projected to generate $300 million annually in sales, create 11,000 jobs and bring in $50 million in state revenue in the first year alone.

“We are a state focused on growing an economy that attracts and retains young people – and what could be more exciting than a new industry that presents so many unique opportunities,” said Lujan Grisham.

The governor’s office said the Cannabis Regulation Act balances economic growth, consumer safety, and criminal justice while prioritizing entrepreneurship and the establishment of micro-business licenses that ensure smaller businesses have a pathway to success.

“This is the right model for New Mexico because it creates a local, sustainable and regulated industry while at the same time protecting our public health, road safety and the well-being of our youth,” said Superintendent Linda Trujillo from the state Regulation and Licensing Department that oversees the Cannabis Control Division.

“The standardization and statewide regulation that comes with a bona fide industry will protect consumers,” she said.

Delora said that in addition to many New Mexicans, a lot of people from out of state came into R. Greanleaf to learn about their recreational, medicinal and CBD products.

“We have great customer service and communication with our patients,” said Delora. “We have really good peer educators and budtenders who inform our patients and customers about our products. It’s always good seeing them leaving with a smile on their face.”

“It’s good to inform people about what it can do for them and how it can help them,” he said.

R. Greanleaf customer Yolanda Espinoza, who is part Diné, said she was really glad to finally see marijuana legalized in New Mexico since so many other states have already benefited from cannabis revenues.

“I’m so happy about it,” she said. “It’s better than alcohol. It just helps you ease your mind. This is more of a safe deal.”

Personally, Espinoza said she just buys the edible CBD to help with her health ailments.

“I just want to get the CBD for the pain,” said Espinoza. “It doesn’t get you high.”

Of course, the CCD also advises anyone buying cannabis to consume responsibly.

“Start low and go slow,” said CCD Director Kristen Thomson. referring to starting with a product that has a low level of THC.

“Even more importantly, though, New Mexicans must remember not to drive after consuming cannabis,” said Thomson. “Driving under the influence puts consumers and others on the road at risk.”

Driving under the influence of cannabis is also illegal.

“Law enforcement will be doing their job to keep roads safe,” said Thomson.

Per the Cannabis Regulation Act, public consumption of cannabis is also prohibited In New Mexico.

“The best place for New Mexicans to smoke or consume cannabis is at their home or another private residence,” stated the CCD.

Brewer said since the CCD is a regulatory body, it does not do marketing for retailers and encourages consumers to do their research online to find a cannabis retailer near them.

“My best recommendation for that is weedmaps.com, which tracks prices, open stores and all kinds of other good stuff,” said Brewer.

Just as a reminder, the possession, production, transportation, consumption, trade, sale or delivery of marijuana is prohibited on the Navajo Nation. 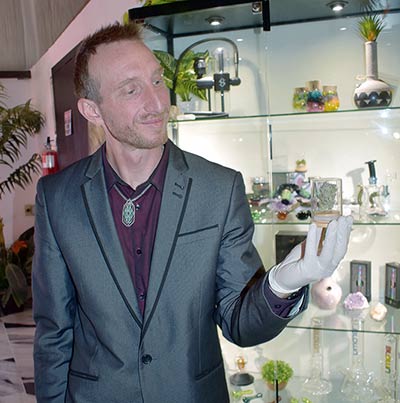 Lyra Barron, owner of Fruit of the Earth Organics in Santa Fe, which offers separate medical, recreational and CBD shops, along with live shows at the attached “Paradiso” performance arts space, said her store was launched with her son Jaum Barron 12 years ago to serve medical marijuana patients.
“We’re a family biz,” she said. “It’s a family affair.”

She also said the April 1 recreational marijuana opening was “amazing” with record sales.

“It was jam-packed in here,” said Barron. “It was just like a steady river of people. It was beautiful and everyone was just blown away by the space.”

Diné silversmith Liz Wallace, who performed with the Saltanah Belly Dancers as part of the Paradiso entertainment line-up, said she appreciates that many people rely on cannabis as a medicine that is more affordable than a lot of prescription medications and provides an alternative to alcohol.

“I just want everyone to take good care of themselves as best they can and still be cautious,” said Wallace. “Try to eat healthy, have fun, enjoy life if you can. Enjoy the beautiful warm weather and all the gifts that nature has bestowed on us.”