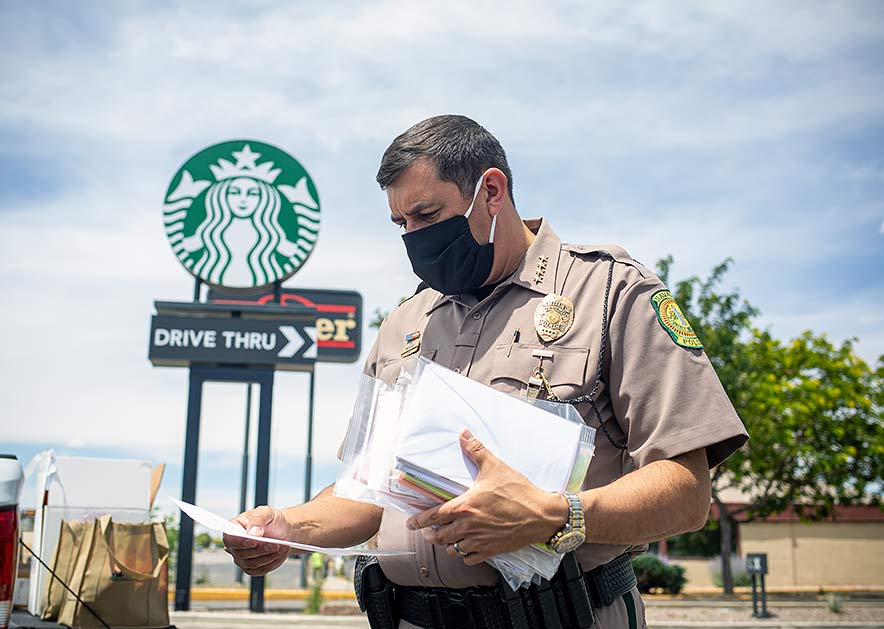 Navajo Times | Sharon Chischilly
Navajo Police Chief Philip Franciso reads a thank you letter written by one of many individuals thanking officers and first responders for their selfless sacrifice during the coronavirus pandemic on July 10 at Starbucks in Gallup.

The Starbucks corporate jet descended onto the Gallup Municipal Airport Friday afternoon and on board were care packages for the Navajo Nation Police.

The nonprofit Operation Gratitude, which supports military, first responders, and veterans by sending out care packages, gave 250 of these packages to Starbucks for the Navajo Police.

“We’ve been bringing resources to the Navajo Police Department – water, hand sanitizer, gloves and masks,” said Phil Amador, district manager for the Gallup, Albuquerque, and Farmington Starbucks locations. “Just a component of recognition for all the people that is on the front lines supporting with the Navajo Nation during COVID-19.”

Tyler Barbone, manager of the Gallup Starbucks, at first helped his employees by letting them take water or toilet paper when these items became scarce once COVID-19 hit.

With his partner also a Navajo Nation Police officer, Barbone said he realized the department had its own needs, and reached out to management to consider helping.

“My partner is Navajo PD and he was telling me of the things they need help with,” said Barbone. “So what I did is put my foot forward and tried to help as best as I could.

“I ordered cases and cases of water from Starbucks and had district and regional manager buy water in Albuquerque and they loaded it up and it started from there,” he said. “We became more involved from there.”

Navajo Police Chief Phillip Francisco was also at the airport waiting for the convoy to make its landing. The ever so grateful chief said this is one of many times Starbucks and Barbone has reached out to NPD and sent donations.

“They reached out to us and they’ve already helped us in many ways,” said Francisco. “They already gave us a lot of different things earlier. A few months ago they gave us water, care packages, and other things that went directly to officers in the field. This is a continuation of that.”

Although cases on the Nation are slowing down because of preventive measures such as mandatory mask wearing, social distancing, stay-at-home orders, and 57-hour weekend lockdowns, the virus continues to have a tight grasp on the Nation.

The virus has directly impacted the Navajo Police and the Navajo Division of Public Safety, after officers and staff contracted COVID-19 early on.

Although those that were ill recovered, there are some who passed away.

Chinle Officer Michael Lee died after contracting the virus, and a couple of days later Criminal Investigator Esther Charley also passed on after catching the virus.

The Navajo Police has been in full operation during the pandemic and what became even more apparent is the need for more police officers.

After a three-month hiatus, the Navajo Police Academy was restarted in June at Chinle. But even with extra precautions and constant testing of recruits and staff, the virus infected seven recruits. The academy has been temporarily suspended.

“We decided to continue with the police academy looking at other academies in other states, our neighbors, and the military,” said Francisco during a KTNN town hall. “Unfortunately, this virus had embedded itself in our community. It exists in our community, within our homes and our department, it’s a reality we are living with.”

The challenges facing the Navajo Police has been tough to deal with. But the support from Starbucks and the public has been touching.

“I talked to one of the corporate people and they were interested in how law enforcement on the reservation is different from what they are use to dealing with in municipalities and counties,” said Francisco. “I gave them a background of what the challenges for us are: dispersed population, lack of resources, water, infrastructure, and low amount of officers. “

The care packages flown in were divvied up at the Starbucks located in Gallup.