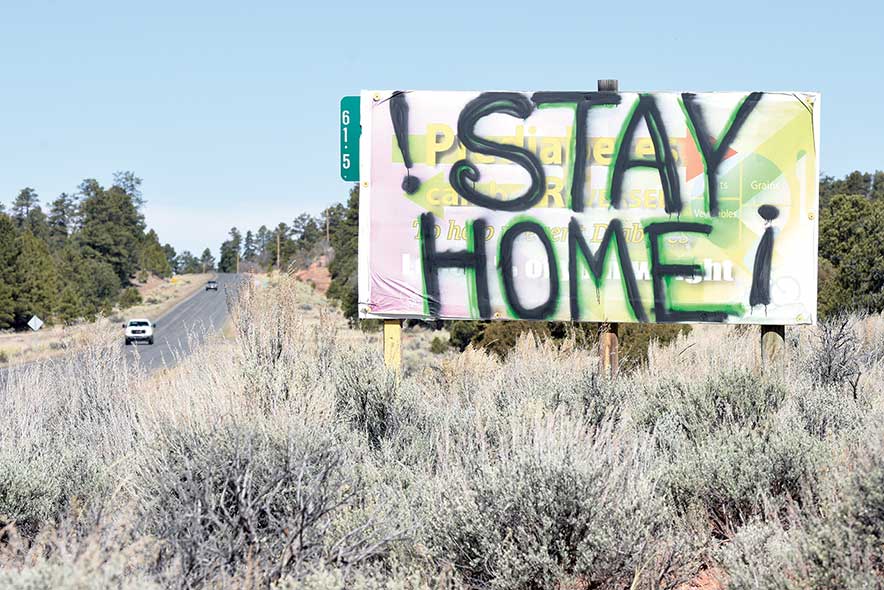 Navajo Times | Ravonelle Yazzie
Signs like this dot the Navajo Nation, but some chapter officials wonder if they're discouraging people from obtaining needed services.

A chapter official in southwestern Navajo said she’s receiving calls from a number of community members saying they might not survive the coronavirus pandemic and saying their goodbyes.
“One person called and said, ‘I’m doing a goodbye note,’ said Bessie McCabe, vice president of the Birdsprings Chapter and a retired social worker. “We have people saying, ‘I don’t know if I’m going to make it, so I might as well say goodbye to you now.’”

Uncertainty behind the coronavirus is impacting people on many levels, from disruption of the norm to social isolation, and putting people with other health issues in a precarious position. “We have financial issues, we have food issues, we have family issues,” McCabe explained. “We have elderly who have appointments and they’re going to be missing their appointments and prescription refills. That’s where we need more health personnel to be involved.”

Services – such as grocery stores, clinics, private medical practices, dental and eye centers – people relied on have reduced service hours, adjusted to restrictions, and halted nonessential procedures. Some services are still available, but people may be too scared to go out and risk their lives. And some services are no longer available.

“It’s just like, ‘Stay home, stay home.’ I wish we could be able to work around some of these concerns that they have,” McCabe said. “I think we can work things out, but we’re just so limited.”

All Navajo Nation chapter houses were ordered shut down last month to slow the spread of the coronavirus – a move that led to chapter officials in southwestern Navajo trying to figure out how to help their communities.

McCabe, along with chapter President Verna Yazzie and Secretary-Treasurer Betty S. Begay, joined forces and started focusing on high-priority tasks. “We’ve been brainstorming and coming up with some solutions,” McCabe said.

“But some solutions are impossible because we cannot utilize our chapter. Everything is stored in our chapter house, such as documents – anything we work with. We are just limited, just handicapped to help our own community. “So this is what’s been going on,” she said. “This (coronavirus pandemic) is like … somebody behind you and just spooked you. That’s how I interpret this whole thing. We get memos. Memos! Memos after memos! Everything one of them reading, ‘Stay home, stay home, stay home.’”

McCabe said this order doesn’t help when employee checks need to be printed and when food and supplies need to be found for the community. Everything needs to be approved by the president’s office. But despite all this, the chapter created a team that is making contact with people by telephone.

McCabe said she and the other officials are also making a list of what the chapter needs, such as hand sanitizers and disinfectant supplies, and ordering food – such as potatoes, flour, and beans – from Navajo Agricultural Products Industry at a discounted price for their community of 916.

“How long is it going to last?” she asked. “All we’re doing is watching TV and the media’s going chaotic with our minds and it’s very destroying! I’ve never experienced any of these historical illnesses or sicknesses, but I feel like this is the one that hit us the worse. People are scared and they are scared.”

Leupp Chapter officials said their community is OK and they’ve been preparing since the first alarms sounded in early January that the outbreak of the coronavirus in China might become global.

“I was in Kaibeto in December and the Kayenta nurses gave out flyers at senior centers,” said Calvin Johnson, secretary-treasurer for Leupp Chapter. “And Winslow (Indian Health Care) came out to our meetings. But apparently, some people don’t listen and now we’re in this situation.”

Now three months into the crisis, as global coronavirus cases surged past 1 million last week, the only thing Leupp officials are worried about is clean water – critical for local health. Some people here have no access to this most basic essential.

“I’m thinking about trash services, people that need to take showers. That’s what we’re thinking about,” Johnson said. “With the (administrative service centers) saying that chapters should be closed – but some of these people don’t have running water. So we have to haul water to the people. Maybe some of them want to take a shower.

“ASC is making that decision, so we’re just abiding by what ASC told us,” he said. Johnson said Leupp, which has a population of about 1,500 people, lacks infrastructure that the outside world has, such as plumbing and safe drinking water.

“We have grandma and grandpa who don’t have running water,” he said. “They have to haul water. They probably need hay since they can’t come to town. “So it’s like we’re putting our lives on the line to try to do something to help them is all we can do,” he said. “But as long as we keep our distances and keep washing our hands and using hand sanitizer, that will minimize and mitigate the chance of catching it.”

Water wells nearby, in the Black Falls area, aren’t safe for humans due to arsenic and uranium. People living in that area have to either drive to Flagstaff or to Winslow for clean water.

“Right now, with this shutdown that’s happening with the limited income that they probably get, it’s hard for them to obtain water,” Johnson said, adding that Leupp Chapter officials are in the process of opening a local water station. “We’re going to be serving people. That’s what we can do in the time of crisis.”

Stores in Leupp also sold out of toilet paper, hand sanitizers, and disinfectant wipes. But orders for those essentials are on the way. Grand Falls on the Little Colorado River, a nearby tourist hotspot within the chapter, which sees about 10,000 visitors during the monsoon season, is closed. Officials also closed the flea market and homemade closure signs blocked off certain roadways to keep people from traveling into certain areas.

“Yeah, it’s very difficult to enforce,” Johnson added. “We wish we could do more. With this virus being contagious, there’s certain things we can and cannot do. But the schools are doing the lunch program. We’re just doing our best to make sure everybody who have kids are fed.”

“We decided to open the water station and let them take water free without paying for it,” said Leland Dayzie, vice president for Tolani Lake Chapter, which has two water stations – one at the chapter and the other located near Black Falls in the Former Bennett Freeze. “We have quite a few people who live in this area.”

Dayzie said Cameron, Coalmine Canyon, and Leupp chapter residents are also using the water station near Black Falls. While the coronavirus has created its own form of terror, it’s not quite like that in the Tolani Lake area, said Dayzie.

“People who are out in the rural area – that are really way out there, behind the hills – they’re ready,” Dayzie said. “They knew it before (how to prepare at least a month worth of food). They’ve always stocked up because of the distance to a grocery store.

“So they have everything,” he said. “Nobody’s fighting over tissue or anything like that out here. Everybody’s pretty well stocked up with water, tissue, and food.” Dayzie said even his own mother is prepared with two burlaps of beans, rice, and other essentials. His mother lives about 22 miles from the main community of Tolani Lake, where there is no infrastructure and services. “Mainly it’s the people who live right in the area of Tolani Lake, such as the elderly who live in the housing (complex) are not prepared for this kind of a situation,” Dayzie said. “They’re the ones who are in need.”