COVID-19 donation fund untapped as of yet

Donations sent to the Navajo Nation to combat COVID-19 have yet to be spent. Approximately $3.6 million has been donated to the Navajo Nation from tribal enterprises, outside companies and individuals since the Nation began collecting donations, with more coming in daily. 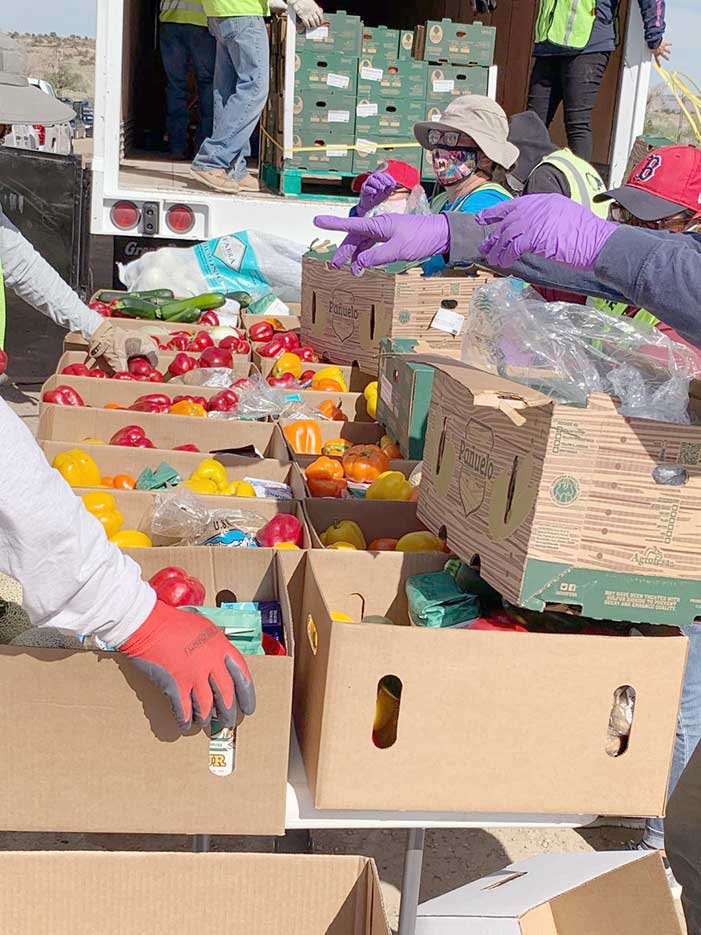 Navajo Times | Cindy Yurth
The tribe has not yet tapped the $3.6 million in donations that have flooded in to help mitigate the effects of coronavirus, but in-kind donations like these peppers from Santa Cruz County, Arizona, are being distributed.

During Tuesday’s Budget and Finance Committee meeting, Controller Pearline Kirk gave an approximation of how much in donations the Nation has received. She explained there are different ways for the Nation to receive donations, either through the official donation website, which has received $1.33 million, or through checks and wiring money which sums up to about $2.28 million. “The donations we are receiving are not being expended right now,” said Kirk. “They are in a separate account.

The funds aren’t being used for anything … it needs to be appropriated first.” Attorney General Doreen McPaul and the Department of Justice are in charge of donations that are sent to the Nation. Kirk said her office works in conjunction with McPaul and DOJ. Throughout the discussion of how to expend the CARES Act $600 million, delegates acknowledged red tape would hinder spending the funds before Dec. 30.

Also recognized was the controller’s office not having enough manpower to handle the large sum along with its other duties, resulting in an amendment to give this office the option to contract outside help to deal with CARES Act funds. So it’s not surprising that donations have been accumulating unused. “Any way we can take away some of our red tape within the Nation to expedite the funds would be great,” said BFC member Nathaniel Brown at a previous BFC meeting.

Crotty had said she was on her way to get personal protective equipment for the senior centers in her area, illustrating a “gap of service” in getting needed supplies to the communities in spite of the fact that the money is there. BFC member Jimmy Yellowhair agreed that at each meeting the committee should receive up-to-date reports on how much is in the fund. Crotty’s communities aren’t the only ones who could benefit from the fund – the Navajo Nation Police is on the front lines of the pandemic.

Last week, Chief of Police Phillip Francisco reported to the Law and Order Committee that since the department implemented its own COVID incident command center on March 13 to enforce new public health orders, it has spent $1.5 million. Francisco said $1.2 million of that is overtime and special duty pay for staff and officers — and that expense will continue as long as the curfews and lockdowns are in effect.

This is worrisome especially if there is another wave of COVID-19, as predicted. “Each 80-hour paycheck for the police department only is approximately $300,000 over what we usually pay,” said Francisco. “For every 80-hour pay period, for everyone that is working, and with the special duty pay it’s looking at $1.2 million. That’s a lot of money. We are getting high up there with what we are spending.”

When it came to supplying officers PPE and other supplies the department expended $55,000 of its general fund dollars. He said they have received at least $31,000 in PPE and various supply donations. This may seem like a lot for PPE but officers go through their gloves and masks rather quickly, between enforcing the orders and responding to the regular emergency calls that involve close contact with the public.

Francisco said they had requested assistance from the Health Command Operations Center and only received a small fraction of what they requested.

“We had a request into HCOC that totaled $380,000 … we were denied $370,000 of those requests,” said Francisco. “We pretty much depleted a lot of our general funds by getting our own supplies.”

While it’s uncertain when these donations can be utilized, the president’s office has continued its daily distribution of food and supplies to homebound families in the rural areas. Kirk did not mention where these donations are coming from, although the president mentioned in previous interviews and town hall meetings that Santa Cruz County in southern Arizona donated fresh produce and a group of celebrities donated dog food.

Grassroots groups around the reservation have also been getting food baskets out to vulnerable elders and quarantined families.