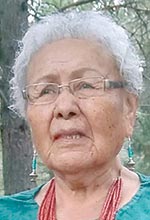 Elsie was a homemaker who enjoyed fishing, making crafts, silversmith work and being outdoors. 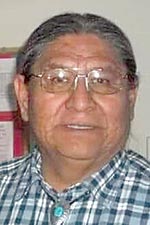 Donald was a member of the football team that defeated the Roy High Giants, 30-6, for the school’s first and only state title in Class C, also in 1968. He had many good memories and good times with his classmates from the Class of ’71.

Donald was a U.S. Army veteran who served with the 82 nd Airborne Division during the Vietnam War. He received numerous decorations and awards for valor. He was honorably discharged from the Army in 1974 and returned to the Navajo Nation to begin his career with El Paso Natural Gas Company in Montezuma Creek, Utah.

Donald was a member of the Black Creek Gourd Society (Fort Defiance) and One Nation Gourd Society (Shiprock). He traveled extensively to volunteer his time as master of ceremonies for various gourd dance events and powwows as he found them most sacred.

Donald was a board member and helped to organize the annual Na’Nizhoozhi Center (NCI) New Year’s Eve Sobriety Gourd Dance and Powwow, the largest sobriety event in the region.

Although Donald encountered several adverse situations in his life, he always found ways to overcome them. He deeply believed in the principles he represented and fought for, and had such respect for family, community, nation and for those who came before him.

Donald always saw the best in everyone, never complained and was an incredibly thoughtful and generous person. He was always ready to give advice or to lend a helping hand to anyone who might need it.

Donald had a quick wit and a tremendous sense of humor. He would converse with anyone about anything, as he was interested in many things.

Those who knew “Don” or “Donnie” found him to be the most positive and inspirational person on the planet. He had many great friends that were a very important part of his life and his family is truly grateful for them.

Donald was interred at the Santa Fe National Cemetery on Monday, May 18.

Due to COVID-19 restrictions, a public memorial service will be held at a later date. 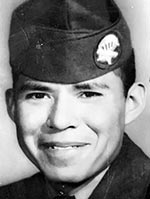 After being honorably discharged from the Air Force in 1962, Frank married his lovely wife, Nancy Allison, and began his 34-year career working for the Bureau of Indian Affairs as an electrician until he retired in 1996.

Known to all of us as Papa Frank, he often told stories of his military career as a paratrooper and airplane mechanic working on B-52s, was a third generation descendant of Chief Manuelito, member of Tohatchi Veterans Organization and received many honors for his exemplary military and government service.

Frank would often be seen reading the newspaper, loved drinking hot coffee (even in the hot summer months), loved watching (literally) every sport, and especially loved his grandchildren with all his heart and often expressed being very proud of them all.

Frank will be remembered as a loving husband, father, the best grandfather, brother, U.S. Army veteran, U.S. Air Force veteran, and most of all, a born-again Christian and servant of God.

Until we meet again, “Well done, thou good and faithful servant, enter thou into the joy of the Lord” — Matthew 25:21. 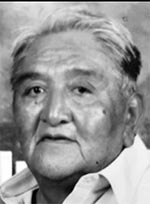 Bernie worked various jobs throughout his life. He worked as a pastor, truck driver, mechanic, baker, and maintenance and construction worker.

Funeral services will be determined at a later date due to COVID-19. 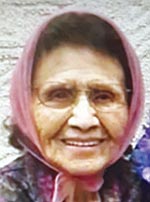 ROCK SPRINGS, N.M. — Graveside service for Marie B. Yazza, 90, of Tohlakai, New Mexico, will be held Tuesday, May 26, at 10 a.m. at the Green Meadows Family Cemetery in Rock Springs, New Mexico, with Ben R. Yazza and Leon Long officiating.

Marie was born June 20, 1929, in Tohlakai, into the Naaneesht’ézhi Táchii’nii (Charcoal Streaked Division of the Red Running Into the Water Clan), born for Tódích’íi’nii (Bitter Water Clan). She passed away May 16, 2020, in Gallup.

Marie was a homemaker and prayer warrior. She enjoyed sewing, beading, weaving, reading the Bible daily, preaching the word of God, attending church socials and spending time with her children and grandchildren. 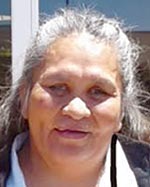 CHINLE — Graveside service for Jennifer E. Tayah, 52, of Chinle, will be held Friday, May 22, at 10 a.m. at the Chinle community cemetery with Pastor Artie Aragon officiating.

Jennifer was born March 19, 1968, in Ganado, Arizona, into the Tsénjíkiní (Honey Combed Rock People Clan), born for Tódích’íi’nii (Bitter Water Clan). She passed away May 16, 2020, in Chinle.

Jennifer attended Chinle High School in the 1980s and was a Wildcat cross-country runner. She worked as a cook and sold homemade food. She enjoyed beading, making jewelry, cooking, and spending time with her family and grandchildren.

Due to current events, there will be no reception.

GLENDALE, Ariz. — A memorial Celebration of Life for Gail Yvonne Stewart, 80, of Many Farms, Arizona, will be held Saturday, May 23, at 10 a.m. at the Glendale Potters House in Glendale, Arizona, with Pastor Andy Cota officiating.

Gail was a loving wife, mother, grandmother and dedicated caretaker to her family and friends. She was full of life, happy, a hard worker, and had a big heart. Her life was a testimony of the word of God and His promises.

Gail is preceded in death by her husband, parents, stepmother, two sons, one sister, and eight brothers.

A reception will take place at the Glendale Potters House, following service.

A live stream of the service will be available. Please contact the family at 623-444-6076 or starlenarstewart@gmail.com.

Keith is preceded in death by his mother, Mary S. Teller; and father, Guy Yazzie Teller.

Jimmie attended Fort Wingate High School and served in the military as a private (E-1) in 1969. He retired as a ranchman and was involved in the Native American Church and Yé’ii Bi Chei.

Honorary pallbearer will be Ronald Sam.

There will be no reception, due to COVID-19.

FORT DEFIANCE — Graveside service for Betty Stewart, 64, of Fort Defiance, were held May 16 at the Fort Defiance community cemetery with Martin Haven officiating.

Betty was born June 6, 1955, in Wide Ruins, Arizona, into the Tódích’íi’nii (Bitter Water Clan), born for Tsénjíkiní (Honey Combed Rock People Clan). She passed away May 11, 2020, in Albuquerque.

Betty is preceded in death by Jimmie Stewart Sr. and Freeman Stewart.

Melvin was born Jan. 6, 1975, at Gallup Indian Medical Center in Gallup, into the ‘Áshiihí (Salt People Clan), born for Kiyaa’áanii (Towering House Clan). His nali is Dziltl’ahnii (Mountain Cove); chei is Haltsooí (Meadow People). He passed away May 12, 2020, at the University of New Mexico Hospital in Albuquerque.

WARM SPRINGS, Ore. — Kenneth Smith, grandson, son, father, brother, and tribal leader, grew up on the Warm Springs Indian Reservation into a family that struggled to make a living in the early 1950s and was raised by his grandparents on their ranch. His grandparents taught him to respect the culture of the Wasco people, protect the tribal lands, tribal people and their immemorial sovereign rights.

Returning to work in the Warm Springs tribal government, Kenneth was instrumental in the economic success of the reservation when he hired the CH2M engineering firm to complete a 20-year comprehensive plan for the development of the Warm Springs Reservation. Major businesses were developed using the reservation lands, destinations resorts, timber mill acquisition, financial investments of tribal funds, and general development of tribal government departments. Tribal jobs were created, sustaining revenue created and social programs for the tribal community. He introduced the use of tribal municipal financial bonds to finance the many developments under the 20-year comprehensive plan.

President Ronald Reagan recognized Kenneth’s management ability to develop tribal communities and nominated him to become the Assistant Secretary of Indian Affairs within the U.S. Department of Interior, where he was unanimously approved by the U.S. Congress.

During his tenure, the implementation of National Indian Gaming and Regulatory Act was one of his major responsibilities. It resulted in the largest business and job creation in the history of U.S. Indian tribes. The government-to-government relationship between states and tribes became a working public policy within the United States. Respect for tribal sovereignty became a reality.

Kenneth returned to the Warm Springs Reservation to his home along the Deschutes River to retire and live in his place with people he loved.

In his speech at Madras High graduation, Kenneth told the audience, “Honor to those who started in small communities to rise to success because their journey was difficult.”