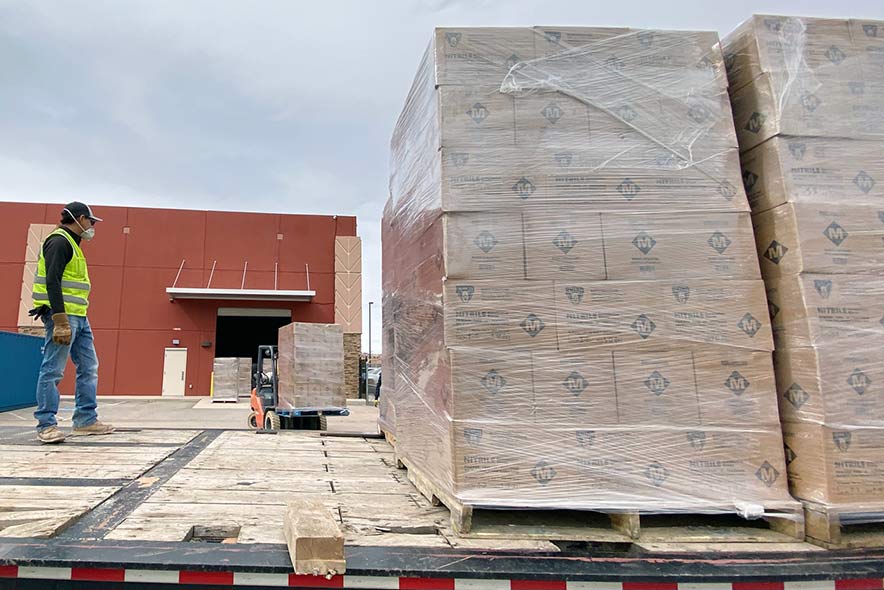 Navajo Times | Donovan Quintero
A Navajo Nation Emergency Operations Command staffer waits for a forklift to load nitrile, medical-grade gloves onto the bed of the trailer on Wednesday in Church Rock, N.M. The gloves, 1.5 million pairs, are being shipped across the Navajo Nation to help fight against the coronavirus outbreak on the Navajo Nation.

The coronavirus pandemic has spurred Rhino Health LLC into action. 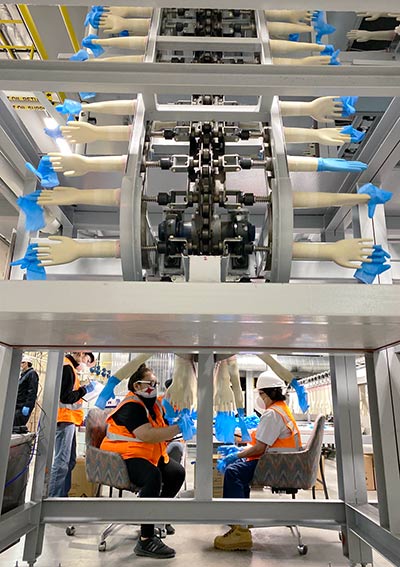 The small glove manufacturing company that specializes in nitrile gloves, which are used in the medical industry, on Wednesday loaded up 1.5 million pairs to be shipped throughout the Navajo Nation to U.S. Indian Health Service and ’638 hospitals.

The company is located in Church Rock, New Mexico, about four miles east of Gallup.

Due to the nationwide shortage of personal protective equipment, or PPE, health care workers and first responders, like police and emergency medical staff, have been forced to reuse PPEs, like gloves, while helping in stricken areas like Chilchinbeto, Arizona, the community with the most outbreaks of the virus on the Navajo Nation.

Rhino Health has sent shipments of gloves, made of synthetic rubber, to New York, New Mexico, New Jersey and Wisconsin.

As the only company that makes the waterproof and chemical-resistant glove in the U.S., CEO Mark Lee said the company is backlogged three to four weeks.

“I need to get more raw materials that takes six weeks to ship from overseas,” Lee said on Wednesday.

Lee said the material is shipped from Korea, one of the countries impacted by COVID-19.

Rhino Health is part of a much larger U.S.-based parent company, Jungwoo Rubber & Plastic, which is based in South Korea.

“For every hundred, we check 50 (gloves),” Jim said. “If there’s more than three, we usually have to tell the line leader, so they can fix the issue.”

Lee said the company produces 8,000 gloves an hour. Since the outbreak, they’ve been working around the clock trying to keep up with demand. 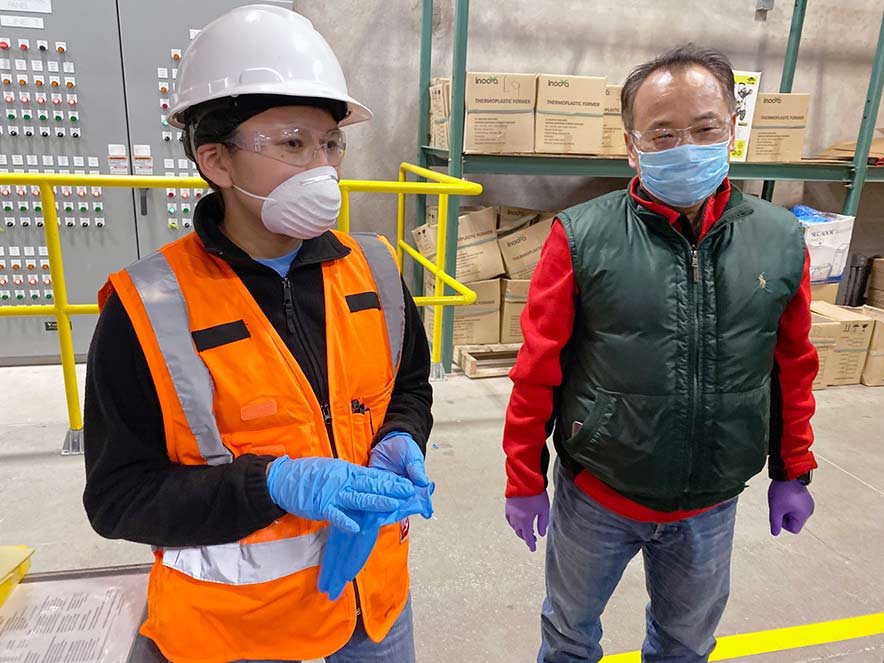 “I know two doctors who died because they just did not have enough gloves and masks,” he said. “They were working like 20 hours a day. It’s a shame.”

Larger companies in Malaysia and Thailand were forced to shutdown because of COVID-19. Lee was anticipating the demand for medical-grade nitrile gloves was going to increase.

But his vision for his company was to develop a long-term working relationship.

“I’d like to find the right customer after the pandemic ends,” he said. “That is my ultimate goal, to work with the right buyers.”

On Wednesday, the U.S. Senate unanimously passed the $2 trillion stimulus package, an 880-page emergency aid package that provides emergency assistance and health care response for individuals, families, and businesses affected by the pandemic.

Part of the stimulus package would go towards health provisions, like nitrile glove-making companies.

Lee did not indicate his company s qualified to receive any of the funding from the stimulus package.

The package now to goes to the House for consideration. President Donald Trump said he will sign the package once it reaches him.