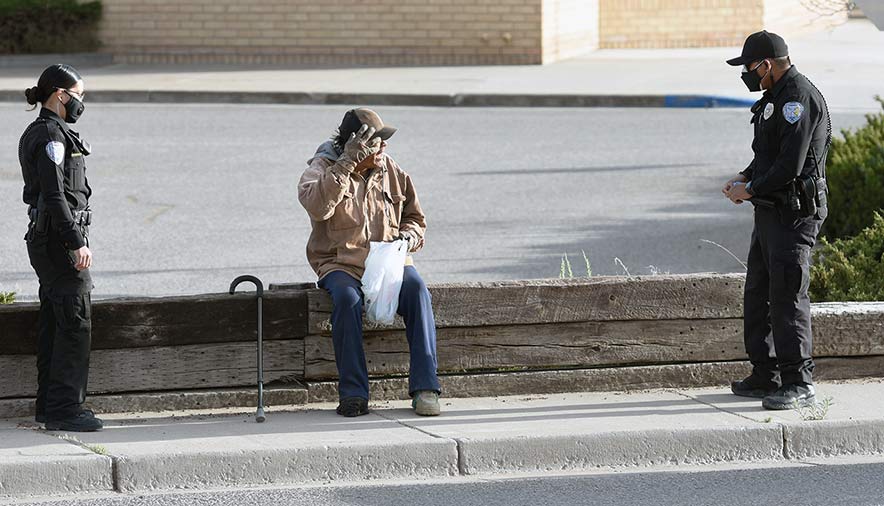 Navajo Times | Donovan Quintero
Public Service Officers with the Gallup Police Department speak to a man on the street on April 17 in Gallup.

Another killer may have a hand in the coronavirus situation in McKinley County.

Alcohol withdrawal — a potentially deadly disease Dr. Jennie Wei from Gallup Indian Medical Center said the hospital is already struggling with — would quickly overwhelm the facility if alcohol sales in the county were completely banned.

“Just to emphasize that a complete ban on alcohol, I do not think we should not consider as the answer,” Wei said last week at an emergency meeting of the McKinley County Commission. “We know that a lot of our patients who have moderate to severe alcohol use disorder are dependent on it, and if they were to not have access to it, it would overwhelm our ICUs.”

Wei and Dr. Valory Wangler, from Rehoboth McKinley Christian Hospital, both gave their expert opinions during the meeting, in which the commission discussed options to curb the spread of the contagion among the homeless population.

The contagion exploded when a person who was in protective custody from April 3 to 5 at the Gallup Detox Center tested positive for COVID-19. A person familiar with the citizen said the infected individual may have been in contact with more than 150 people at the center.

The county commission unanimously passed an ordinance to ban the sale of alcoholic beverages with an alcohol content greater than 15 percent at all convenience stores operating within county limits on April 13. But a week later, on Monday, they rescinded the ordinance by a 2-1 vote.

Commissioner Bill Lee explained why he reversed his vote.

“I think that wherever we squeeze, people are going to find an outlet somewhere,” Lee said. “I don’t know that even our recommended restriction of the hard liquor is working because I think people are still going to go and find it.

“I think what we’re doing is not slowing the spread, but, if we’re forcing people all the way into another county, then we’re certainly maybe increasing the spread of this virus,” he said.

The restrictions, Lee added, were causing people to drive into other neighboring counties like Cibola County to buy their alcohol, including hard liquor.

“It’s my recommendation Mr. Chairman, and if I need to do so in the form of a motion, that we would actually rescind the restrictions that we have in the ordinance and stop squeezing things,” Lee said.

Lee said the city of Gallup passed its own emergency ordinance that completely banned the sale of alcohol in convenience stores operating within city limits. With the help of the New Mexico National Guard, the city seemed to be “keeping things fairly regulated.”

The city of Gallup established its own emergency ordinance on April 15 that prohibits the sale of all types of alcohol at convenience stores operating within city limits.

Wei said the ICU beds at GIMC are filled with COVID-19 patients.

“Over the weekend, Dr. (Kevin) Foley reported that for the first time that he has ever seen, there were only six or seven people in the detox as of Saturday night,” Wei said, referring to the weekend of April 10 to 13. “What exactly was that? Was it because we have motels now for people who, once they sobered up, they can safely shelter? Was it because of the Navajo Nation curfews over the weekend? Or, was it because NCI had a huge outbreak?”

Prior to the outbreak, city, county and state law enforcement regularly took inebriated individuals to the detox center. According to Captain Erin Toadlena-Pablo, the city took more than 100 people into protective custody and transported them to the detox center where they could be held up to three days.

With the outbreak, the center was on lockdown, said Toadlena-Pablo.

Despite a major drop, Wei said they were still receiving and holding patients experiencing alcohol withdrawal.

“Alcohol withdrawal is a deadly disease that we struggle with day and day out. They fill our ICUs already, regardless of COVID(-19),” Wei said.

According to the New Mexico Department of Health, McKinley County has ranked in the top three counties in the U.S. for alcohol-related death rates since 1981. It ranked number one from 1997 to 2010, the NMDOH reported.

Viral pandemics are not mentioned, but alcoholics living on the street often group together and share bottles … perfect conditions for a contagious disease to spread.

Wei and Wangler emphasized their concerns to the commission and recommended the sale of alcohol not be completely banned. If they placed a complete ban on it, chronic drinkers would leave their shelter or hotel room to get a drink, they argued.

Lee, on April 13, said he was not in favor of completely banning the sale of alcohol in the county because of the delirium tremens (DTs), or other withdrawal symptoms associated with chronic drinking. However, on Monday, Lee voted in favor, along with Commissioner Chairman Billy Moore, to revoke the emergency county order. Board Commissioner Tommy Nelson voted against the revocation.

“I’ve seen it Friday outside the county,” Nelson said, recounting the effect the county hard liquor sale ban caused. “(At a) liquor establishment, where they got a 12-pack and they had a whole list of what to get and went ahead and got five quarts of another set of beers and maybe two wines.

“They bought all the liquor there,” he said. “Then they went out and another person came. That’s what I seen.”