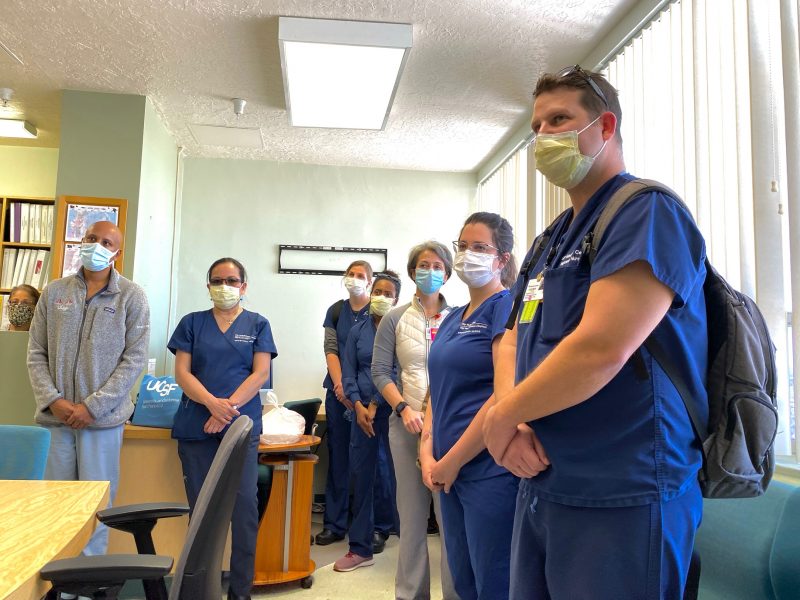 Navajo Times | Donovan Quintero
University of California San Francisco health care workers will be volunteering their expertise for a month at hospitals in and around the Navajo Nation, providing urgent healthcare support.

When Dr. Sriram Shamasunder, co-founder of the University of California at San Francisco’s  Health, Equity, Action, Leadership Initiative, was asked if the program could bring nurses to Navajo during these trying times of COVID-19, he didn’t hesitate.

“As part of UCSF and HEAL Program we’ve been working with the Navajo Nation for five years,” said Shamasunder. “One of our goals is to be in solidarity with the Navajo people and accompany you at all times including the COVID surge.”

The request for emergency medical nurses and critical care nurses came from HEAL fellow Dr. Adriann Begay and another colleague, who were already on-site working at Gallup Indian Medical Center.

“It’s a program that is trying to bring equity to health especially to the underserved,” said Begay about HEAL. “So they’ve been here with the Navajo Area Indian Health Services.”

Being a part of the HEAL Program and serving in underserved areas overseas gave Begay an appreciation for what medical services the Navajo Nation has.

“When I was part of the HEAL Program I realized how lucky we are and the resources that we have,” said Begay. “To us, they may be limited here, but when you think about people in Nepal or Africa  … it gave me an appreciation for what we have here.”

On March 17, the Navajo Nation reported it first two cases of COVID-19 in Chilchinbeto community and from then the very contagious virus spread like wildfire. As of Friday night, there had been 1,540 cases of COVID-19 and 58 deaths. There are also a total of 6,473 negative test results. Some 8,978 tests have been administered, with some test results pending.

These staggering numbers, President Jonathan Nez explained, are partly due to increased testing being done, including rapid testing.

“This is not really the Navajo Nation where we are at, but a majority of the patients are Navajo,” said Nez as he met the HEAL team at GIMC Friday. “There has been an increase in positive people here in Gallup.”

McKinley County has 351 cases. Up until last Saturday, border town COVID-19 cases had been counted in the tallies released to the public each week by the president’s office, but by Monday, Navajo Health Department stated the Navajo Epidemiology Center has analyzed and distinguished cases between Navajo Nation residents and border town residents. The newly reported figures only include Navajo Nation residents.

Whether or not the numbers are being reported, the surge in McKinley County has been the highest in the state of New Mexico, believed to be due in large part to the large population of homeless alcoholics, according to local authorities.

Navajo Area Indian Health Service director Roselyn Tso said during a meeting with the Navajo Nation Council’s Naabik’iyati’ Committee the first case of COVID-19 at the Gallup Detox Center was identified on April 8, but IHS believes there had been cases before that as early as March 30.

According to Tso, the April 8 patient may have had contact with as many as 170 people while carrying the virus.

Some of the HEAL Program nurses weren’t there to meet with Nez and Vice President Myron Lizer because they were already out in the field tending to the 130 or so patients quarantined at local hotels — a move on the city’s part to minimize the spread among the unsheltered.

While HEAL usually sends doctors, Shamasunder said Begay had specifically requested nurses, so they spoke to UCSF leadership in hopes they could get the nurses needed.

“In a matter of days we had a team of 21 with 14 nurses,” said Shamasunder. “The goal was to be of service at this moment.”

Nez and Lizer said that although promised federal aid has been slow in coming, the recent national publicity about the high number of COVID cases on Navajo has led to an outpouring of help from all over the country.

“We have partners like you all who are friends to Navajo,” said Nez to the HEAL team “that have a heart for the Navajo people and we appreciate that. It’s the slowness of the federal government right now, but people like you, and the doctors and nurses who have stepped up, (have) shown that with the limited resources we have, we can help one another out.”

As of Friday, San Francisco had reported 38 new cases bringing its total to 1,340 with 22 deaths. The city has a population of 883,305. The low numbers are attributed to its residents sheltering in place, which was first ordered March 16. Just recently the city’s mayor said this order will continue on for another month or so.

Navajo Department of Health issued a shelter-in-place order March 20, when cases on Navajo were at 14. Even with this order, and subsequent curfews, case numbers and deaths on Navajo continue to increase. The peak on Navajo is expected to happen in early to mid-May.

“We’ve got to continue to let our citizens know that this serious,” said Nez. “They have to take it serious. People are losing their lives. They just have to listen. That’s it. Stay home.”

Having worked on Navajo, Shamasunder said the alarming numbers were “predictable” in the sense that the Indian Health Service has been chronically underfunded. Not to mention that the Navajo population itself suffers from morbidity such as high rates of diabetes and high blood pressure to name a few.

“When you have something like COVID, its difficult to shelter in place because you have families of 10-12 people,” said Shamasunder. “All the things that makes the connectivity so beautiful on Navajo Nation, also makes it susceptible for COVID-19.”

The HEAL team will dispatch nurses to Chinle, Shiprock and Tuba City in addition to Gallup. They will stay for a month to reinforce the IHS personnel at the hospitals there.