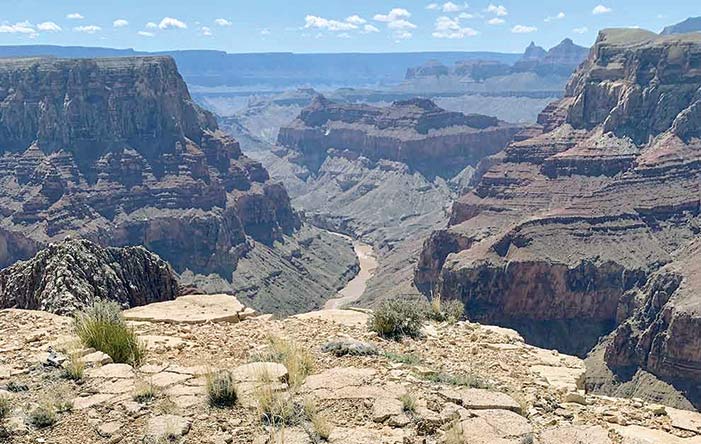 Special to the Times | Bianica Yellowhair The overlook to the Confluence, where the Colorado and Little Colorado rivers meet at the Grand Canyon, is quiet due to the halt of helicopter and airplane tours due to the coronavirus.

By Ben Winton
Special to the Times

If there is one good thing about the coronavirus, it grounded all the air-tour operators over the confluence of the Colorado and Little Colorado Rivers for the first time in about 30 years.

Navajos with ties to the area said this is the first time that the younger generation has ever been able to hear the water of the Colorado River, or the rustle of the wind through the rock cliffs.

“It’s quiet in a good way. You actually hear the water without the noise distracting you,” said Bianica Yellowhair. Yellowhair is among the descendants of Navajo shepherds in the area.

As a young college educator, she comes from a generation that never knew a quiet Grand Canyon East Rim. Helicopters and aircraft from air tour operators had always thundered over the Confluence. Their engine noise and rotor blades send sound shock waves booming off the cliffs from sunrise to sunset, seven days a week.

All that changed in the last few days. “You are able to be in the moment without annoying helicopters,” she said. This was the first time she could offer a prayer and corn pollen to the Navajo deities without interruption from the skies overhead.

For more than five years, Navajos and other tribes with ties to the Confluence battled developers that wanted to build an aerial tramway down to the confluence of the two rivers.

The development would have brought tens of thousands of tourists to the area by bus and possibly by helicopters. It could have disrupted, further, a way of life that had existed for generations.

The Navajo Nation Council, on Oct. 31, 2017, rejected the years-long effort, which had pitted developers against the people with ties to the area. Environmentalists welcomed the relief to the Grand Canyon. They say it is much like the reduction in pollution that has occurred over large cities worldwide recently.

For Native peoples, the relief also is welcome. Now that it is quiet, Yellowhair says, maybe the Holy People can hear her Navajo prayers.