‘A bummer for everybody’: Shiprock Marathon canceled 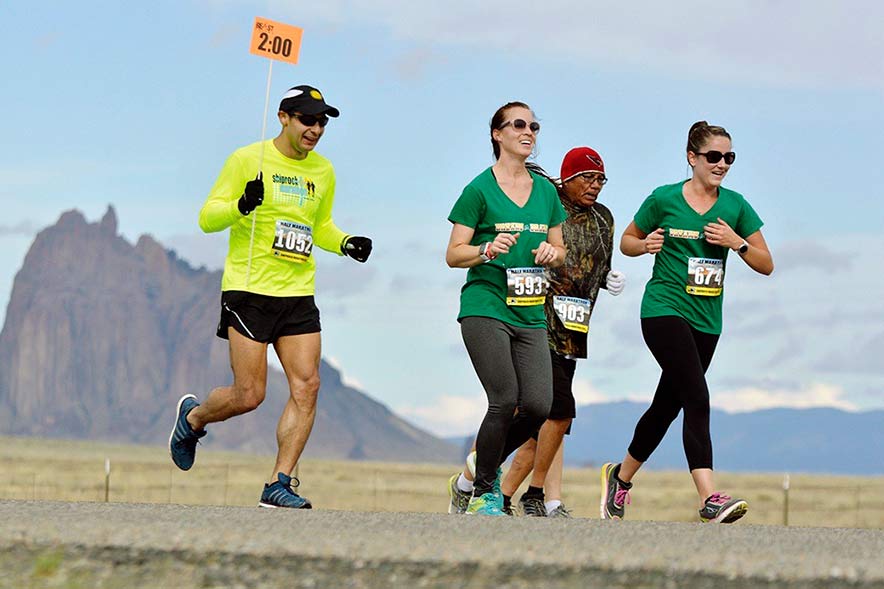 For the first time in 37 years no one will cross the finish line of the Shiprock Marathon.

Officials for 37th Shiprock Marathon decided to cancel this year’s festivities due to the coronavirus pandemic.

“It never has been canceled and hopefully, it won’t be again,” he said.

Riggenbach said the only other time the race was affected by current events was during the Boston Marathon bombing in 2013. Extra precautions were taken in response, but the race continued.

Riggenbach said the decision to cancel the race came on March 17 after much deliberation.

He said the organization shared a message on Facebook expressing how difficult it was to make the decision to cancel the race.

“I had a person on Facebook ask me ‘Was it really that hard to make a decision?’ Yeah, it really was. It was really hard, in hindsight it wasn’t but at the time, yes it was,” Riggenbach said. “We can sit here now … and it’s pretty obvious it was the only decision we could have made.”

The race and other festivities were to take place on May 1-2, with the finish line at the Diné College Shiprock South Campus.

Riggenbach said registration numbers were yet again solid and the final touches were being made. He said concern over the spread of coronavirus first came up for the organization in late February during the Monument Valley Ultra.

“We took precautions and did some health screenings,” Riggenbach said. “The race went on. Then, it didn’t seem to be a huge amount of hysteria.”

The hysteria began to build as the weeks went on. As more information came and went in regard to the spread of the virus, whether the race would carry on became more and more uncertain.

Race officials were in a medical and safety meeting on March 5 and discussed scenarios that could gravely affect the event, such as a massive rainstorm. They discussed talked about coronavirus but never really thought that it would be what resulted in the event being canceled.

“There were always updates, always new things coming into play,” Riggenbach said. “We started having some serious discussion on how this is going to impact Shiprock (Marathon). The initial thought wasn’t to cancel it.”

Instead, the organization decided to take precautions and make adjustments that were appropriate for the situation.

They considered creating a two-day packet pickup system to reduce crowds on the Friday before the race. They considered a rolling start line, just to name a few.

They were ready to make adjustments as the race drew closer.

But all of that changed once again on March 16, when they finally decided to pull the plug on the race — the day before the Navajo Nation identified three cases of coronavirus.

The organization then had to worry about damage control.

They scrambled to decide on options for those already registered for the race and to figure out what to do about the monetary loss the organization would face.

Riggenbach said those who registered had four options: Roll their registration over to next year’s marathon, transfer their fee to another NavajoYES race later in the year, a full refund, or donate their fee to the non-profit organization.

He said many chose the first option.

“A lot of runners have done that,” he said. “About half of them, and there’s no fee. Those who signed up for the half marathon can even upgrade a race; people can actually move up to the next level of distance. Lots of people have chosen that.”

As for the race itself, it will be a virtual race.

In the virtual race, participants complete all miles of the marathon on their own time at their own place throughout a week.

There will not be a fee for those who would like to participate, but those interested are asked to register online. All participants will be awarded a special poster that will be delivered at a future race or mailed later in the year.

Another popular event during the festivities is the kids’ marathon, where local elementary school children run their final mile of a marathon the day before the adult version of the marathon. Riggenbach said the organization was willing to travel to different schools to have kids run their final mile, but that also changed when the spread of the virus heightened this week. He said the kids will be recognized for their efforts; they just have to figure out how to make that happen.

Naturally, the organization suffered great loss on the financial end.

They lost money invested in the timing company, in supplies, and other areas.

Riggenbach said despite the losses, the organization decided not to project them onto participants.

“There’s quite a few costs that we’re absorbing at this point,” he said. “We kind of went back and forth in terms of how to really handle that. It’s not our fault, but it’s not the runners’ fault either. It’s pretty much a bummer for everybody.”

But there was one bright side to the situation.

Riggenbach said it was an eye-opening experience that allowed for him and the staff to learn more about managing such situations and that the precautions they decided to take before the race was called off might be worth keeping as they move forward.

“I think some of those policies, some of those practices, they seem like they might be some things that are not that practical and necessary, but they are,” he said.

The NavajoYES race series have since canceled its April 11 Tour de Rez bike series and is playing the rest of their summer and fall schedule by year.