In 2016, while she was still an undergrad at Julliard, Ariel Horowitz got a strange phone call from her mother, a curriculum consultant for Navajo Technical University. 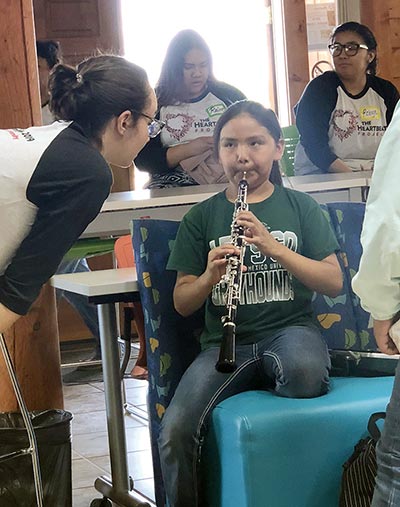 Courtesy photo | Ariel Horowitz
Amaya Anderson receives feedback on her oboe technique during the 2019 Heartbeat Music Project summer camp. The camp was canceled this year due to COVID-19.

It was less a request than an order. “She said, ‘You’re going to go to a place called Crownpoint, New Mexico, and you’re going to play music with some kids,’” Horowitz recalled. Amy Horowitz not being a person to be trifled with, her daughter dutifully packed her bags.

NTU, it turned out, was concerned about the dearth of arts education opportunities for youth in the area, so Amy Horowitz had volunteered her violinist daughter to experiment with a summer music camp for kids.

“I brought a buddy of mine,” Ariel recalled. “We didn’t have a clue what we were doing. We worked for five days with seven kids. We sat in a hogan and played a lot of games and made music together. It was a humble, lovely exchange between us and the students.”

Ariel went back to her studies thinking she had had a fun cross-cultural adventure, perhaps had made a contribution, and that was the end of it. Then toward the end of the school year, NTU called. “They said, ‘You’re coming out again this summer, right?’” Ariel recalled. She hadn’t planned on it, but … “Yeah, sure,” she said.

That was the start of the Heartbeat Music Project, which through summer camps, winter workshops and funding private lessons in between, has taught dozens of Diné youth to play an instrument — but more importantly, “to thrive and gain confidence in themselves, their abilities, and their local and global potential,” according to its website.

Under the executive direction of Sharon Nelson, who is also on the faculty of NTU’s Diné Studies department, the students also get a dose of Diné cultural education every day. “It’s not expressly related to music,” Ariel admitted, “but the kids love it and it’s part of a holistic model of education we definitely subscribe to. Plus, I get to be blown away every day learning something new about Navajos.”

The Heartbeat faculty includes such notable Diné musicians as Delbert Anderson and Renata Yazzie, and kids can choose from a variety of instruments and genres. There’s never a charge; NTU provides the campus, dorms and meals, and Roadwork, Inc. — a nonprofit with the mission of building multi-racial coalitions through women’s culture — funds a lot of the other stuff, along with private donations.

This year, Heartbeat was busily preparing for its largest camp ever — 60 children had signed up! — when COVID-19 reared its ugly head. The camp was indefinitely postponed. Then Ariel, the program’s artistic director, started thinking the program was in a perfect position to respond to the pandemic. It had contacts in the community, and contacts with donors on the East Coast. And she had time.

“All my concerts were canceled,” said the professional violinist. “My calendar looked like a polar bear in a blizzard.”

Meanwhile, the Lewis Prize for Music, which supports innovative youth music programs in underserved areas, had launched its own COVID relief grant program.

“Our team is spread out all over the country, so we were feeling the shutdown in mid-March,” said Dalouge Smith, the Lewis Prize’s CEO. “We started wondering, what is the field of creative youth development doing to address the pandemic? What we found was that there were a large number of organizations that were immediately pivoting to COVID relief.”

The Lewis Prize posted a request for proposals for grants ranging from $25,000 to $50,000, and got 99 applications, which they whittled down to 32. Heartbeat was the only recipient in the Four Corners. Smith said the grant readers, who included children and young adults, were impressed with Heartbeat’s knowledge of its community and the efforts it was already undertaking.

“The staff members had already donated their stipends to the Navajo-Hopi Families COVID-19 Relief Fund,” he noted. “These are artists who are already losing income from not being able to perform in public.”

Heartbeat was matching every dollar its faculty contributed. In addition, the staff had undertaken a letter-writing campaign to let their students know they were thinking of them and encouraging them to keep playing their instruments.

“By writing actual letters, they were recognizing the inconsistent availability of technology on the reservation,” Smith said. “This shows a real sensitivity to the circumstances in their community.” Ariel said the $25,000 grant will make a huge difference to a tiny organization like Heartbeat.

The staff has not yet decided how to spend the grant. “Some of it will probably go to emergency items for the community,” she said, “but I’d also like to help the students to produce some virtual mini-concerts they can use for fundraising or just to lift people’s spirits.”

Musicians, she said, are often seen by society as non-essential folks who are nice to have around but not necessarily driving forces in their community. Nothing could be farther from the truth.

“Because I have this ability to speak this universal language of music, I can create relationships with people all over the world and mobilize those relationships to address issues,” she said. “I think our students are starting to view their own musicianship in the same way.”