It was a school that was close to her paternal roots as she grew up in nearby Hoyt, Kansas, a small rural community near the Potawatomi Indian reservation. 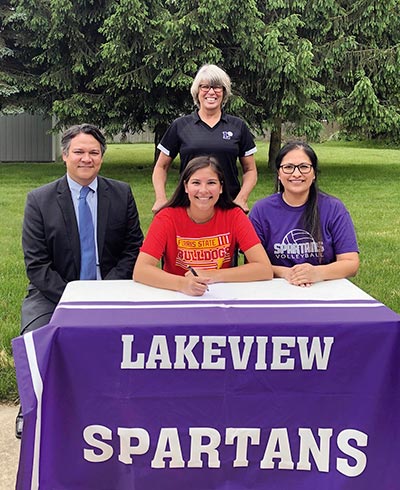 The Battle Creek Lakeview High grad felt that Haskell would be a great place for members of her dad’s family to come watch her play. But when the opportunity to compete for the Ferris State University women’s volleyball program fell onto her lap in her home state of Michigan, the Diné Native couldn’t pass it up.

“To be honest it’s really hard to believe that this happened,” the 5’9” outside hitter said. “When I was a freshman I knew I wanted to play college volleyball but I didn’t think I would go D-II, which is crazy to think about it.

“I’m very thankful and grateful that I’m going D-II,” she added. “I know that the college qualified for the NCAA tournament last year so that’s really exciting.”

Hannah is the daughter of Frank and Melissa Tecumseh. She has two siblings, older sister Rose and younger brother Myles. Her maternal parents are Carl and Maggie Cooke.

The tipping point for Tecumseh to sign with the Big Rapids, Michigan school was simple. As an enrolled member of a federally recognized Native American tribe while living in Michigan for at least a year, Tecumseh will have her tuition waived while she attends the public university.

“That was the big game changer for us,” Hannah’s mom said. “We knew that going out-of-state was going to be expensive so she chose to stay in-state.”

Melissa, who played at Window Rock High, said her daughter had at least 10 offers with Ferris State being the only Division II school to offer her a scholarship.

“Her selection was not easy,” she said. “She went through weeks of conversing with all the coaches that were interested in her.”

And although she did not get a chance to visit the college due to the COVID-19 pandemic, Hannah feels that Ferris State is a perfect fit.

“They have a great volleyball program,” she said. “The coaches are really nice, they really focus on technique and they focus on team bonding, which is really nice.”

“I’m super excited and I can’t wait to see all of my teammates because I know I have created a lot of bonds,” she said, noting that she’s been in contact with her coaches and teammates through Zoom.

“With the coronavirus I know there are a lot of unpredictable things happening right now,” she said. “I’m hoping that we’ll have a chance to have a season.”

Hannah said she plans to study optometry, a field that piqued her interest due to the yearly visits she has with her eye doctor.

“It’s kind of ironic because I have really bad eyes,” she said. “I feel like I’ve been going to the eye doctor a lot so it’s kind of inspiring. It’s something I want to do so that I can help others.”

Hannah said the optometry program at FSU is one of the best in the country and she hopes to study abroad while helping kids in developing countries get prescriptions for eyeglasses.

Hannah said her mother and aunt, Christie Cooke, introduced her to volleyball at an early age. Both siblings played collegiately with Carly playing four years at Long Island University while her mother played one year at Haskell.

The Cooke sisters started a Starling Volleyball Club in Hoyt, Kansas with Hannah and older sister Rose playing on the team.

“Being in a rural community it fit the profile for us to have a club volleyball team and the Starlings was willing to help sponsor us,” Melissa said. “That kind of got the ball rolling for Hannah and her older sister and it just resonated from there.”

In 2015, the Tecumseh family relocated to Battle Creek, Michigan for job opportunities, a move that benefitted the two girls.

“The one thing we really liked about Battle Creek was that we moved to a really good volleyball community,” Melissa said. “They took volleyball serious like the way we did. It meshed really well with us.”

According to Melissa, her older daughter, Rose, was also a standout volleyball player but of the two Hannah “had a little bit more passion” for the sport.

“Sometimes you have kids that take sports to the extreme and that’s Hannah,” she said. “Hannah really loved it and Rose just liked it.”

With a desire to play collegiately, Hannah took the necessary steps to get noticed with the help from her parents.

“There are plenty of apps out there to help in the recruiting process,” Melissa said. “With Hannah we were really aggressive in putting her name out there. We went to a lot of tournaments and we filmed her.

“Hannah was real forthcoming,” she said. “She reached out to all the coaches by sending them emails and videos.”

For club ball, Hannah played for the USA Michigan Club, one of the state’s premiere clubs. The director of the club, Rob Buck, coached the men’s volleyball team at Ball State University. In high school, Hannah played for Heather Sawyer, a former member of the Canadian Olympic team.

“Having all those influences has really helped her,” Melissa said. “For her to soak it in and take their teachings has made her a more well-rounded volleyball player.”

“All the coaches that I had are professionals,” she said. “They pay attention to details and they make sure everything is done correctly. They really pushed me to be the best player that I can be.”

And although she is going to be two hours away, Hannah said she’s having mixed feelings about moving away

“I’m excited for college because I can finally, like, do things on my own,” she said, “but then again it’s kind of nerve-wracking because it’s going to be the first time I’ve ever been alone, without my parents.”