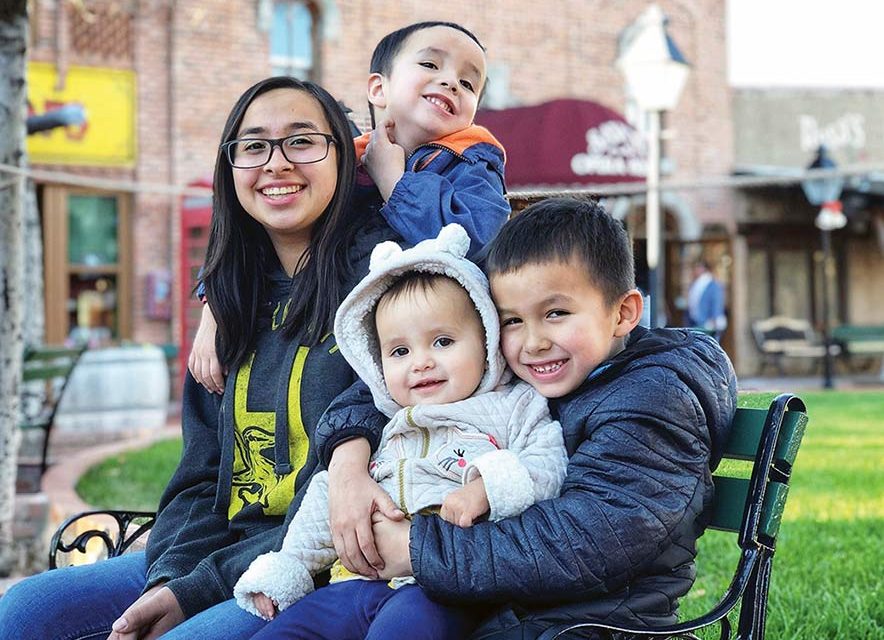 When the COVID-19 pandemic broke out, Kristen Hosteen searched online for a digital program for her daughter, Brianna. Her father was born and raised in Tuba City where the family of six live today.

“I wasn’t sure how some of the schools would handle (online classes), so I’d rather have her in a school that already had its bearings in virtual (teaching),” Kristen said.
When she googled virtual schools, Arizona State University Prep Digital caught her eye.

After learning it’s been around for a while and had a good reputation, Hosteen chose ASU Prep Digital for Brianna, who transferred from Grey Hills Academy.

According to an online description, ASU Prep Digital is an accredited online K-12 school with forward-thinking opportunities. It’s been operating since the fall of 2017.

“We follow the 24-credit Arizona diploma because our students are typically college prep,” said Karen Sanderson, Brianna Hosteen’s learning success coach, whose job is much like a guidance counselor.

“Because it’s part of Arizona State University, it offers an accelerated path toward college admission and the chance to earn concurrent high school and university credit,” the online description reads.

“I like that they have the dual enrollment,” Krisen Hosteen said. “By the time Brianna graduates from high school, she will have (several) college credits under her belt. It will save us a lot of money.”

“It’s a great opportunity,” Sanderson said, “and it’s cheap too. Students get a waiver when they take ASU courses.”

For high school, its free of charge for fulltime students living in Arizona, she added.

There are 3,300 Arizona full-time students for this coming school year.

Kristen Hosteen said she also likes the online parent portal that keeps her up to date on Brianna’s work and progress and a coach to guide her along the way.

“Every time she turns in an assignment and it gets graded, it goes straight to my phone. I can check her grades instantly, which I really, really like,” Hosteen said.

About Brianna’s learning coach, she added, “Ms. Anderson is always calling to check-in on Brianna. She calls to make sure classes are going well and to give us updates. We get a lot of help that way.”

ASU Digital Prep is more than an offering of coursework, Sanderson pointed out.

Hosteen added that students need high-speed internet capability. If they don’t have Internet at their homes, she suggested using a community-based hot spot like the one in Tuba City.

“We have the fairgrounds in Tuba with the 5G,” she said, “so when the internet goes down (at home), we have our van set up and we bring a little table so we can work over there. They have a parking area and it’s free.”

(Sacred Wind Communications, with an office in Yah-Ta-Hey, New Mexico, provides free educational Wi-Fi hotspots at 15 chapters and Gallup Indian Medical Center, according to its website at sacredwindcommunications.com)

Brianna has had her sights on becoming a midwife, which requires a nursing degree and special training, since she was a young girl.

The oldest of four children, she was at each of her brothers’ and sister’s births.

Their births were an inspiration to her.

“I realized this is what I want to do,” she said. “I want to help bring lives into the world.”

Brianna started the ASU Digital Prep program when she was a 15-year-old sophomore. She’s now going into her junior year.

She plans on graduating high school in 2023.
She has a heavy load this semester including calculus, English, forensic science, history, chemistry and human development, a mix of high school and college courses.

“It was more challenging than I thought it would be,” she said, “and a lot more work.”

Thinking about her choice in digital high schools, her mom remarked, “I am very happy with ASU Prep Digital. I know Brianna will do well. I know she is going to be prepared to go to college.

Brianna’s already thinking about where she’s going to work once she finishes her college education.

“I think I might go back to Tuba City,” she said. “There’s a midwife team at the hospital.”