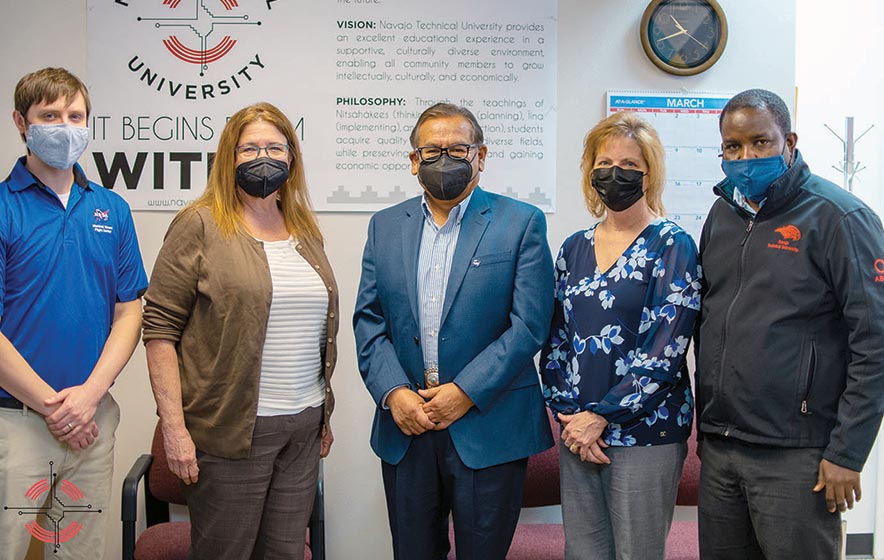 The NASA group did an on-site review of NTU’s research abilities to help strengthen partnerships for future opportunities.

In 2019, team awarded NTU with a $3 million grant for the Additive Manufacturing Education and Research Project, headed by Ramoni.

NTU students made presentations about the projects they’ve been working on.

Winter Morgan, an NTU lab intern, said she worked with her partner, Joel Yazzie, and said, “We have our first joint published paper together.”

Their project was based on collecting surface data using a 3D cube tool called a “surface profile meter” that is dragged over the surface of the 3D cube.

Their paper was published in the American Society for Precision Engineering (www.vnmglobalsolutions.com/publications).

The second presentation, given by Nyala Murphy and Deidra Deswood, was titled “SUM 2021 NASA AM Metal Internship.”

Their research was based on 3D printing applications for aerospace companies and the material they used is a nickel-based superalloy.

Murphy, an NTU lab intern, said, “I felt confident and was not worried. I’ve done enough presentations since I started working in the Fab Lab that I’ve gained the experience and understanding of my work.”

Murphy, describing working with her partner, Deswood, said, “We work as a team, we continue to teach each other with collaboration and trust in one another, and we accomplished our goal together.”

PHOENIX (AP) — The board that oversees Arizona’s three public universities on Thursday approved modest tuition increases for incoming freshmen students who are state residents and larger boosts for non-residents.

That same increase will also hit incoming freshmen, bringing tuition for the 2022-23 school year to $10,978 for resident undergrads and $12,014 for graduate students who are Arizona residents.

Northern Arizona University and the University of Arizona stuck with their promise not to impose tuition increases for most students during their four years of undergraduate studies.

Housing and meal plan costs vary, but they can exceed the cost of tuition.