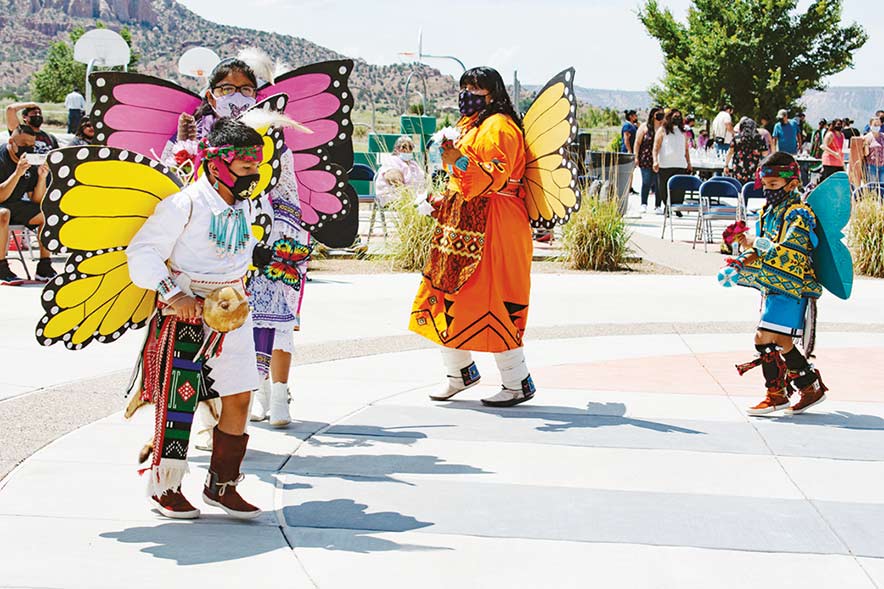 Campers ages 7 to 12 performed corn, hunter, and butterfly dances wearing back scarves and leggings they made themselves.

“They played a variety of games,” she said, “and they partnered with Wings of America for a running camp and Silver Stallion from Gallup, New Mexico, for a biking camp.”

Summer camp proved to be a valuable experience for the counselors as well. These 15- to 24-year-olds completed two days of in-house training and a four-day outdoor retreat in a culturally significant area prior to the start of camp.

Counselor Tamika Lee said her experience was an extremely positive one, especially in light of the ongoing COVID-19 pandemic.

The stadium guest allowance was limited but other supporters of graduating seniors were able to tune in to a live-stream on Facebook-and some honked and cheered from the parking lot.

And students were named to Fort Lewis College’s Dean’s List for the spring 2021 semester.

These students took at least 15 credits of gradable hours and achieved a 3.60 or higher grade-point average.

TUCSON – Teachers typically bring lessons to life for their students, but this summer, the teachers became the students to learn more about the role of agriculture in Arizona.

More than 60 teachers from 13 of Arizona’s 15 counties participated in the Hybrid Summer Agricultural Institute, which was sponsored by the Arizona Foundation for Agricultural Literacy.

The institute offered virtual lectures, including those by the University of Arizona’sAudra Waddle from AZ Queen Bee and John Boelts from Desert Premium Farms.

A panel discussion was moderated by Stefanie Smallhouse, president of the Arizona Farm Bureau.

Some teachers traveled to different parts of Maricopa County, which included stops at dairies, land and cattle companies, farms and Yavapai College.

Participants said that they enjoyed learning about agriculture in person.

“I never thought I would love hanging out at feedlots and dairy farms in 120-degrees, but this was truly an awesome day,” one said.

Participants said that their time at the institute would help them have deeper discussions with their students.

“In order to really teach the importance of farming, you have to get there and see it firsthand,” one said.

Teachers from four of Arizona’s 15 counties participated in the National Agriculture in the Classroom’s annual conference, which was held in Des Moines, Iowa, but also included a virtual option.

PHOENIX – With school buses prowling through neighborhoods again as school resumes, drivers should expect to wait when the bus’s stop sign arm is extended while children are boarding and exiting the bus, according to an Arizona Department of Transportation news release.

However, about 13,000 motorists each year are reported by Arizona school bus drivers for not stopping as required.

A new streamlined process is allowing the Arizona Department of Transportation Motor Vehicle Division to send warning letters more quickly to owners of vehicles that were reported as not stopping for the school bus stop sign.

MVD then sends a notification letter, which is not a citation, to the vehicle owner as an effort to call attention to the seriousness of running the stop sign, which allows students getting on and off the bus a safe space to cross the street.

Previously, school bus drivers would fax forms to the Arizona Department of Public Safety, which then emailed or faxed the reports to MVD.

“Oftentimes, the reports were in batches and difficult to read, and it put DPS in the middle,” said MVD Senior Division Administrator Susan Trask. “We created an online form for the bus drivers to complete, removing DPS completely from the process, and making the submission electronic. This removed the need to fill out a form to fax or email.”

Motorists, who are issued citations by law enforcement officers for passing a school bus when a stop arm is extended, could face a civil penalty and possibly a suspended driver license under state law.