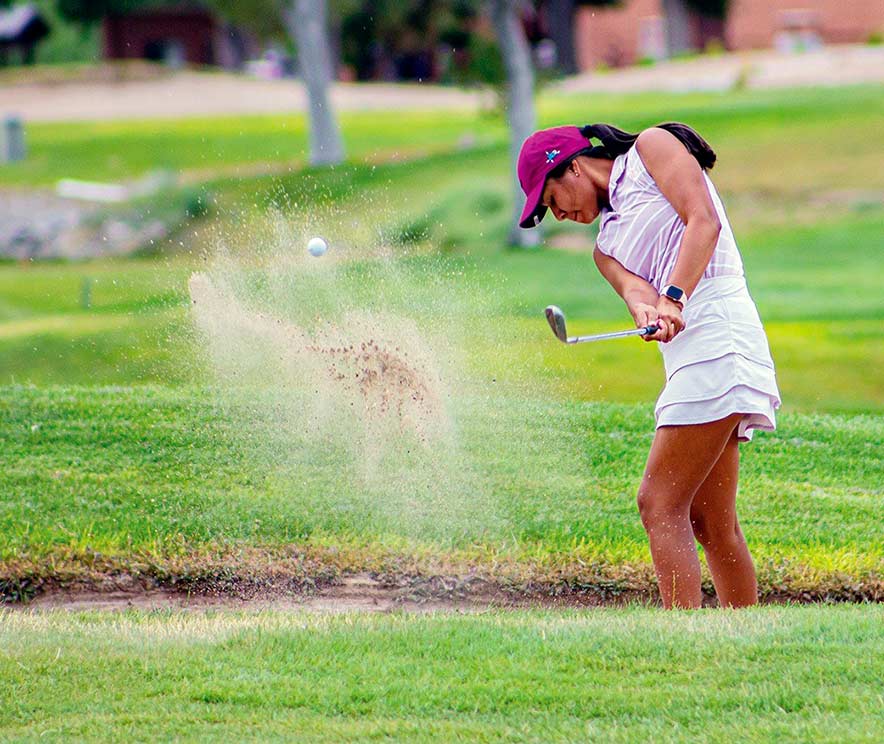 Navajo Times | Cyrus Norcross
Shandiin Harper pitches her golf out of the bunker onto the green on August 10 at Santa Ana Golf Club. Harper went on to win the girls 14-18 age group, reclaiming the title at the Notah Begay III Foundation Native Youth Golf Championship.

Before heading off to play golf collegiately at Western New Mexico University, Shandiin Harper will have another opportunity to play on the manicured grounds of the Koasati Pines Golf Course in Louisiana.

The Piedra Vista graduate repeated as champion at the NB3 Native Youth Golf Championship on Tuesday at the Santa Ana Golf Club.

She pulled away with a one-under 71 for a three-shot victory over Washington native Emma Worgum.

“I had a pretty good round considering I was not hitting the ball very well but I was putting great,” Harper said on Tuesday. “All my putts were dropping so I was pretty happy with that.”

As the winner of the girls 14-18 age group, Harper earned her ticket to compete in the Notah Begay III Jr. Golf National Championship, which will take place Nov. 13-15.

“I’m so excited to be going back,” Harper said. “It’s one of the best tournaments that I’ve ever played in. It’s just cool to be a Native American golfer and representing the Navajo Nation at this big tournament that Notah Begay has put together.”

She will be joined by Laguna’s Adiance Cheromiah (boys 14-18 winner), Utah’s Kanyon DeRyke (13U boys winner) and Mississippi’s Laylee Wishark (13U girls winner) at the national tournament in November. 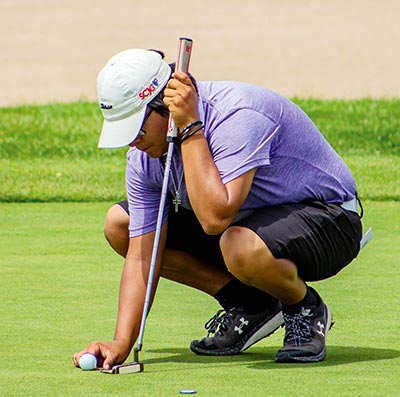 Navajo Times | Cyrus Norcross
Adiance Cheromiah of Laguna, New Mexico sets down his golf ball after analyzing the terrain on August 10 at the Santa Ana Golf Club. Cheromiah was the boys 14-18 overall winner.

Clint Begay, the NB3FIT Director and the golf tournament coordinator, said the tournament drew 49 golfers up from 30 the year before during its inaugural run.

“This year we opened it up,” he said. “Last year because of COVID we kept in in-state and we had 30. This year we had kids from Winnebago, Nebraska to Porcupine, South Dakota and we had one family that drove all the way from Choctaw, Mississippi.”

The tournament also had a local flavor with participants coming from the Four Corners area as well as the Albuquerque metro area.

And while he was pleased with the numbers, Begay said there were some golfers that were missing.

“There are a lot of kids that should be here but they couldn’t make it,” he said. “Maybe it’s financial reasons or maybe they started school. I think COVID knocked us around a little bit with scheduling.”

For the two-day tournament, Harper finished the 36-hole event at 4-over par 148 with Worgum finishing three strokes back for second at 151 and Ada, Oklahoma, golfer Beans Factor at 158.

“I played with two amazing girls,” Harper said of Worgum and Factor. “They’re so good at playing golf so I had to play great to win.”

Going into the final day, Harper trailed Worgum by four strokes as she struggled on the greens during Monday’s round.

In the boys 14-18 group, Cheromiah got a stiff challenge from three other golfers as he edged San Antonio’s Austin Ottmers, Albuquerque’s Tristen Toledo and last year’s winner Skyler Woods by one stroke.

“It was mainly my putting and sometimes my iron shots,” Cheromiah said of his score on Tuesay. “It was just not trusting my shots because I’ve done some swing changes recently … I was putting myself into not good positions to make good putts.”

It wasn’t until he turned in his scorecard that Cheromiah realized that he won the tournament.

“I wasn’t sure if I did because I didn’t have too good of a front nine,” he said. “I felt like I needed to push myself in the back nine and I did. I just had to battle it out because I knew there were some good players who could shoot low in the tournament.”

“This means a lot,” he added. “Last year I came in second when they had the first annual tournament. I had lost to Skylar Woods so it’s really home for winning this tournament because I’ve improved a lot since last year.”

The soon-to-be-senior at Laguna-Acoma High School said he’s looking forward to competing in the national tournament.

Begay said the winners from the two-day tournament will get to see the game being played differently at the national tournament.

“These kids are going to experience so much,” he said. “The three kids that went to last year’s event said it was an eye-opener because of the competition.”

Begay said last year’s qualifiers were amazed with how far the other golfers were able to hit the ball.

“We’re trying to help them get that exposure,” he said. “With this tournament we tried to get them exposed to a quality run event. We had pin sheets and we set up the course by yardage and we put in things that normal big junior tournaments have. We want the kids to see something bigger than what they’ve seen in a local tournament that would be held in smaller towns.”

When asked about the national tournament, Harper said she is looking to do better than what she did last year.

“I want to be in the lead group and obviously I want to try and win it,” she said. “Last year I went in with a lack of confidence but this year I’m a lot better. I just have so much confidence going into this tournament, knowing that I can do well.”