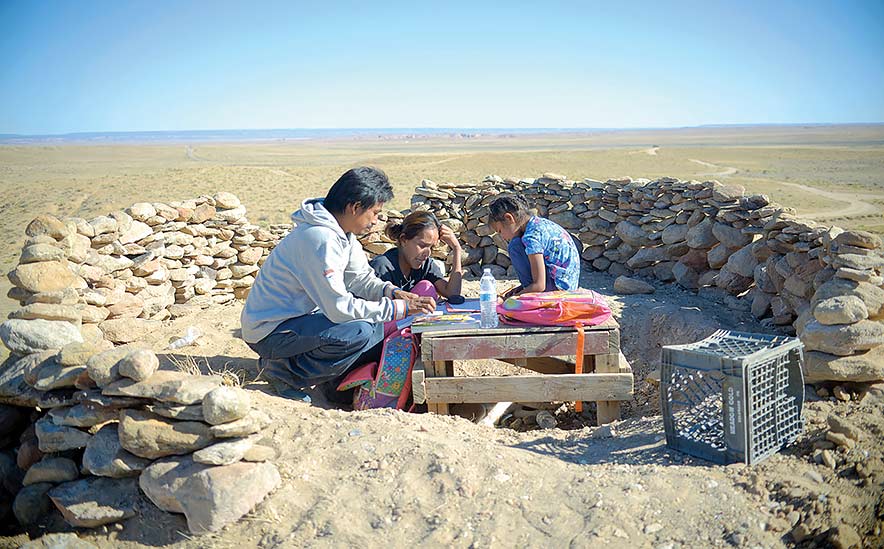 Navajo Times | Donovan Quintero
Milton T. Carroll helps his daughter Kyla Carroll, a first grader at Cottonwood Day School, with her school work on Monday at their home in Fish Point, Ariz. Her mother Wylean Burbank is seated next to her father.

There is a stiff, warm mid-October breeze blowing across Fish Point, Arizona, but the circular rock wall Milton T. Carroll built for his daughters is providing some protection.

However, it does not help at all with the 80-plus degree day that has been beating on them since his kindergartner at Cottonwood Day School, Eziellia H. Carroll, began doing her homework on a wooded bench that’s become a makeshift school desk.

The view, from their makeshift classroom, is 360 degrees of the dry and sparsely vegetated landscape they call home. The five-year-old is busy learning her ABCs as her mother Wylean Burbank, patiently encourages her, telling her she is doing well.

With pencil in hand, Eziellia is focused on writing her name correctly and legibly. Under her makeshift school desk is her puppy, fast asleep. Her father is seated next to them with their other daughter, Kyla Carroll, a first grader at Cottonwood Day School, helping her with math.

Two cellphones are on the desk, one of which, her father said, was being used to send text messages to her teacher, who in turn was texting back instructing her mother on what to work on next after they are finished with her daughter’s writing homework. Her school-issued tablet was recharging. “They like being up here and doing their schoolwork,” Milton Carroll said on Monday. “That’s one thing the school really counted on us parents. They really want us to work with our kids. The reason we’re up there is because there is no signal. There is a good signal spot right here. I built this for my kids so they can temporarily use it.”

Before the pandemic, everyone regularly walked up to the hill to make phone calls and check text messages. There were no plans to construct any kind of wall prior to the pandemic. To the family, it was the hill they’d always climbed for exercise, to herd their sheep up and over in order to get to better grazing pastures. After they made their phone calls or text messages, they’d walk back down watching their signal and data gradually disappear.

Not having any cell service, as well as walking up and down the hill, are part of their daily lives, said Thomascine Francis, Milton Carroll’s aunt. Then COVID-19 hit, forcing schools across the reservation to close, drastically changing the lives of students. To protect students and school staff, the Navajo Nation Board of Education passed a resolution on March 13 that temporarily closed all schools for three weeks.

Ten days later, on March 23, the U.S. Bureau of Indian Education ordered all of their schools, including Cottonwood Day School, to close. Milton Carroll’s and Burbank’s daughters, Francis’ daughter, their cousins, were home now, unsure of what is to come.

By Aug. 6, Assistant Secretary of Indian Affairs Tara Sweeney announced all BIE schools were going to reopen on Sept. 16. The decision to reopen drew criticism from the Navajo Nation. The Navajo Nation Board of Education passed a resolution on Sept. 3 opposing the BIE’s plans. Francis said her daughter, Taneesha, a junior at Chinle High School, already begun online schooling, which began on Aug. 3.

Francis said the school issued Taneesha a laptop and a mobile hotspot from Cellular One. Francis said they already knew there’d be connectivity issues. “It’s just a lot of struggling,” Francis said. “We have to go way on top of the hill. Sometimes it doesn’t work. And they tell us to go to that bus. They said that’s where the services are.”

The bus to which Francis referred was parked on Friday on Navajo Route 4, their turnoff. The Wi-Fi strength emitted from the bus was not strong enough to reach their home, which is about five miles northwest. “He waits there all day, from 8 a.m. to 5 p.m. for the kids but I see nobody there,” Francis said, referring to the bus driver.

Her uncle, Stephen Burbank, who uses the hill to say his prayers, more recently for a COVID-19 vaccine, said he looks forward to the day his grandkids can go back to school.

“Every day I come to the top of the hill and pray,” Burbank said on Friday. “I pray the virus will go away so the schools can reopen, and the children can go back.”

After drawing criticism, Sweeney stated on Sept. 17, the BIE would provide online schooling at all 32 of its schools that operate on the Navajo Nation.

The assistant secretary added the BIE would provide 10,000 laptops, 1,000 iPads, and 6,000 mobile hotspots to help their students do their online schooling from home. To conduct online schooling, Cottonwood Day School, according to the Federal Procurement Data System, purchased more than $193,000 worth of student laptops. The laptops are estimated to arrive by the end of October.

For Francis, Carroll, and Burbank, they said their children are getting by. While Taneesha now gets a week’s worth of homework in a packet that she turns in every Friday. Carroll’s and Burbank’s daughters say they will continue using their makeshift classroom on the hill. For how much longer, their father said he was not sure because it was getting colder.

“We really need an internet tower to help us out,” Milton Carroll said. “It’s starting to get cold now. It would be nice to have a tower here.” He said he would continue improving the enclosure to try and keep everyone comfortable, at least until it gets too cold. “It’s pretty good work though. Other than that, I’m still going at it,” he said.

An email was sent to the school asking for comment. As of press time, the school did not respond. Sweeney said online schooling would last for a period of nine weeks before taking another look at reopening the schools.