Handbag designer rides out the pandemic as a long-haul trucker

Her Freightliner Cascadia tractor has a Detroit DD15 engine with a DT12 transmission and she can back it up to a target, which happens quite often as she drives her big rig across the country. 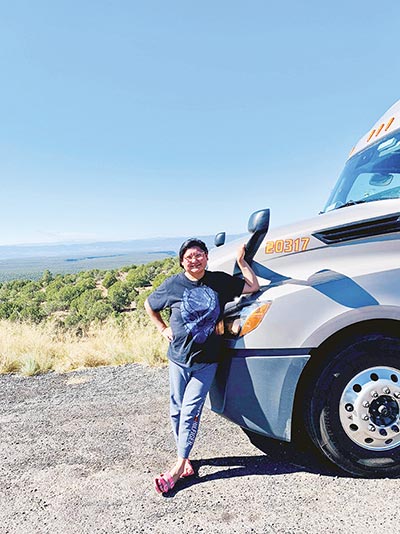 Backing up a semi is one of the most difficult maneuvers that a trucker can face, according to the Diesel Driving School. But Glenda Bennett, a 34-year-old Diné trucker, can do it. And she’s doing it for her 4-year-old daughter, Zooey.

Bennett’s originally from Kaibeto, Arizona, home of her small business, Glenda Bags LLC, a brand that made bags – velveteen, leather, beacon print, and traditional floral fabric – inspired by the Diné culture and traditions. She is Tsé Deeshgiizhinii and born for Yé’ii Dine’é Bitáá’chii’nii (Táchii’nii).

She is the daughter of Carlos Begay Sr. and Rachel Bennett. Glenda said Glenda Bags was doing very well and business was booming. When the coronavirus pandemic emerged as a threat to the nation’s small businesses, despite Congress approving $700 billion – including a second stimulus – to support them, Glenda Bags sales went down dramatically. “I really didn’t think anything of it until about May,” Bennett said. “It just flatlined. Most of it was because I wasn’t about to start pushing sales because I already knew that people don’t have money and people aren’t going to afford the things that I’m making.”

Glenda Bags produced handmade handbags and accessories such as totes, cosmetic, bucket, and toiletry bags, clutches, wallets, and even tassels for the bags. She started her business around 2015. Making the decision (sub) “So, that’s when I made the decision: ‘All right, I’m just going to have to end this because at this point, what am I going to do with it (the business)?’” she explained. “I’ve seen other indigenous companies push through. But the thing is when you run your own business, people don’t see the other side of it like the struggle and the frustration.”

Bennett said she believes at least 95 percent of Native entrepreneurs are still struggling to survive the year by borrowing money or drawing on cash reserves. “And if they make it through this (pandemic), that’s awesome,” Bennett said. “That is beautiful and that is perfect. But I had reached a point where I was (saying), ‘I can’t do this anymore.’

“And what was so crazy was, before COVID hit, I bought satellite internet and I thought, ‘Yes! I can do more. I can get out and reach more. I can get to my emails,’” she said. “My internet went down the drain. I was like, ‘Oh, gosh!’”

So Bennett closed up her Glenda Bags workshop, shut down her business website and social media accounts, and took her father’s advice and enrolled in the Roadmaster Drivers School in Phoenix.

She had hands-on commercial driver training to earn her Class A CDL license at the end of six weeks. Bennett would have finished her training in three weeks but for COVID-19 delays.

After passing the state CDL license exam and earning her CDL, Bennett had more paperwork and a background check – for an additional three weeks. When everything checked out, she was flown to Portland, Oregon, to meet with a male trainer.

The day before she and her trainer left for a cross-country trip, hauling a load of supplies for The Home Depot, Bennett went to a Walmart store to buy a thicker blanket and other essentials for the long trip.

“I was like, ‘Aw, geez’ – I didn’t know what to pack for,” Bennett said. “I had everything, one (outfit) for each season. And the next day, we drove.” After delivery on the East Coast, they turned around and headed to Washington state where they picked up a trailer of dry goods for delivery to Wisconsin.

Depending on a trucker’s CDL endorsements, Bennett said a trucker can haul a variety of things, such as dry goods, a “reefer” (refrigerated trailer) hauling produce, and tanks of sometimes hazardous liquids. “Right now, I do basic stuff,” Bennett said in a telephone interview with the Navajo Times from Nashville, where she was under a 34-hour Restart Rule for the workweek. This is a mandated break when a trucker is nearing the maximum number of hours allowed in “on duty” or “driving” status.

“I have a tanker endorsement, meaning I can haul gasoline, milk, and water in those big tanks,” she said. “So it depends. Most of the time we don’t even know what we’re going to haul because the order sheet, it’ll have a bunch of numbers. I don’t know what they mean. And sometimes, it’ll tell you exactly what you’re going to be hauling.”

When asked what it was like driving a semi-trailer, she said it’s quite different from driving a regular-size vehicle. She compares driving a semi to driving a water truck on the Navajo dirt roads.

Bennett said truckers have a lot of responsibility as they drive down the road. The biggest concern is safety, which is the main reason for regulations to keep fatigued drivers off roadways. “You have an eight-hour clock, an 11-hour clock, a 14-hour clock, and a 70-hour clock,” Bennett explained. “So, you have four clocks that you have to look at when you get started (for a trip).”

Bennett said the 34-hour Restart Rule is a way for truck drivers to quickly reset their workweek. For example, say a driver is working 70 hours in eight days or 60 hours in seven days.

Drivers, Bennett says, can reset their clock by taking a break of 34 consecutive hours in two different statuses: “Off duty” or “sleeper berth,” and once drivers complete their 34-hour break, they can start working again. “So, they (truck companies) really regulate your time so you’re not fatigued and you’re not tired,” she explained. “They don’t want you driving when you’re half asleep.”

Regarding truck stops, Bennett said the trucking company that she works for works with Pilot and Flying J truck stops. And when she’s on the road after pre-planning her trip, she’ll stop for a beverage or a quick bite to eat at one of the Pilot travel center locations that she locates through the Trucker Path: Truck GPS & Maps app on her smartphone. She makes a stop only if she plans a stop on her itinerary.

“Most of the time, the Pilot and Flying J, they’re OK depending on where you’re at,” Bennett explained. “So far, most of them that I’ve come across, they’re pretty decent. “But then sometimes,” she said, “I feel like the people (inside the truck stops) look at me. And most of the time it’s because I’m a female and most of these drivers, they’re male drivers. I do feel it and I do see it.”

Sexism and harassment didn’t become apparent until Bennett was in the northern states during one of her first cross-country trips with her trainer. She needed to use the bathroom and asked her trainer if they could pull over. The trainer agreed to the stop, she went inside and was scrutinized by a man who followed her out the building and got into the truck right next to hers and then followed her to a roundabout where he then tailgated her closely while sounding his horn.

“I knew it was real, but I didn’t know how real,” Bennett said as she remembered how frightened she was that day. “I told my trainer, ‘This guy is right behind me, I’ve never seen anybody do this.’

“Then he said, ‘I’ll watch him, don’t worry.’ I told my trainer again, ‘Look at this guy!’ That’s when my trainer rolled down the window and (told him), ‘You better stay the f— back!’ Then he was like, ‘Don’t mind that guy.’

“I kind of got scared and asked what was happening,” she said. “My trainer said, ‘Don’t mind him. This is your tractor, this is your trailer, so go at your own pace.’” Eventually the male trucker passed them.

On the verge of tears after the incident, Bennett said she took the time to explain to her trainer about the Missing and Murdered Indigenous Women and Girls coalition and the violence against Native women and how Native females like herself are mostly targeted off-rez.

“I told him, I’m Navajo. I’m a woman and there’s this thing called MMIWG,” Bennett said. “I educated him and what it all meant. I’m a woman and I’m indigenous. This means wherever I go, I’m more likely to be targeted.”

Bennett said from that day forward, her trainer advised her to have a weapon at all times, especially on the road, far from family and friends. She carries a large knife that she compares to a sheep/goat-butchering knife. She keeps it hidden on her person.

She said her favorite area is the forest areas of Wisconsin where the trees burst with color every fall. “They look like they’re blowing up like fireworks,” she said. “Being from Arizona, we’re not used to the green and seeing so many trees. It’s different from the juniper trees. “And I can’t help but think about the indigenous communities,” she said. “I’m always questioning stuff.

“And it’s always amazing to see another female trucker trucking along,” she said. “You can see her doing an (intimidating) backup with a trailer. And I’m right there like, ‘Yes! Yes! Yes!’

“I’m always cheering on the other women,” she said. “And I don’t think men can handle it when a woman can do their job. And they’re almost offended like, ‘How dare you do my job!’” Bennett said the last time she was home in Kaibeto was on Sept. 14.

“Native women are just so freaking resilient,” she said. “(We) just don’t take no for an answer. I said to (myself and to Zooey), ‘You know what? I’m just going to go to school, work (hard) and I’m going to take care of us.”

Bennett said one of her favorite moments on the road was when a youngster signaled her to pull her semi’s horn. “I love when people do that,” she said. “I love it! Don’t stop doing that. Bruuump! Bruuump! Oh, I was so happy when that happened to me! It’s pretty cool but I hate being away from my baby.

“But I got to do this right now,” she said. “At least she’s with her dad and I’m grateful they have a good relationship.” She said she cannot wait to show up at her parents’ house with her big rig. But that won’t happen unless she has a trip through the northwestern rez.