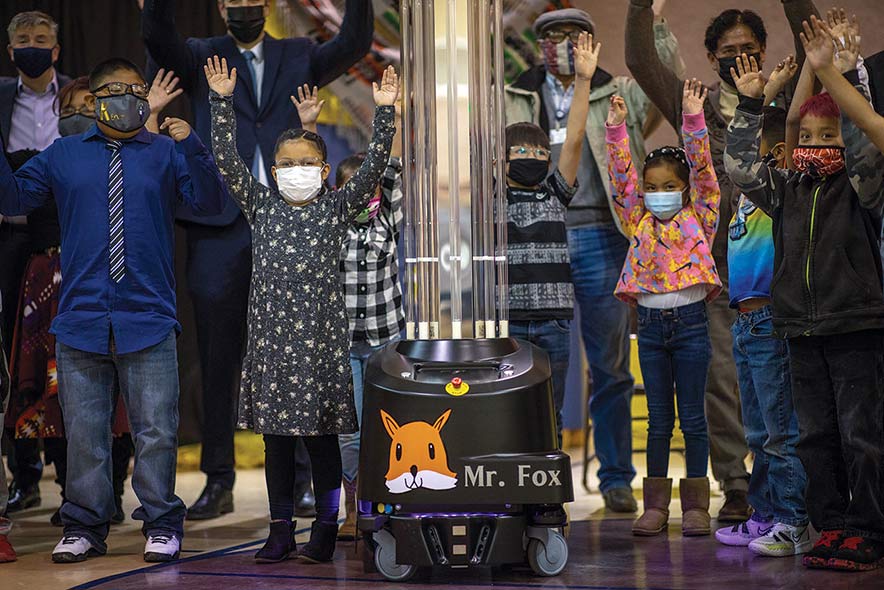 Navajo Times | Sharon Chischilly
Students celebrate as they meet the UVD robot, which they named "Mr. Fox," on March 25 at Twin Lakes Elementary.

Not to worry, though, the robot is not there to take anyone’s job.

The robot, an autonomous, self-driving machine that uses ultraviolet light to kill the SARS-CoV-2 coronavirus, or COVID-19, made its debut at the Twin Lakes Elementary School on March 25.

It’s not much to look at – about 6 feet tall and looks like it’s made to clean floors and doesn’t make much noise.

If anything, a person would not know what it was or what it’s used for.

For one thing, you would not be able to see the dangerous UV rays beaming from eight 180-watt lamps, said Andy Molenar, vice president of business development for the Americas for UVD Robots.

Those rays are emitted to kill the coronavirus and other pathogens.

“So the light is very powerful at killing all pathogens that you might find in a school environment, and importantly, the COVID virus,” Molenar said.

“The Center for Disease Control states that UVC at the wavelength that we operate at on our lamps is the optimal germicidal wavelength to deactivate viruses, bacteria and fungus,” he said. “Your robot will deactivate the virus between four to 9 seconds as it drives by.”

The U.S. Food & Drug Administration states that UVC radiation has been used for decades to reduce the spread of bacteria, like tuberculosis.

UVC radiation was used to kill the SARS coronavirus, or SARS-CoV, which is different from SARS-CoV-2.

SARS-Coronavirus, or Severe Acute Respiratory Coronavirus, was first reported in 2003, according to the CDC. That virus infected more than 8,000 people and killed 774 throughout Asia, Europe, South and North America before it was contained.

People who contracted SARS developed a high fever and sometimes a headache, body aches and diarrhea. Most patients got pneumonia, according to the CDC.

How it works, according to the FDA, is the UVC radiation destroys the outer protein layer of the virus. The destruction of the outer layer inactivates the virus.

By touching surfaces that may have the COVID-19 virus, it attaches itself to the surface of the skin where it may stay for a few days. When a person touches their face with the virus on their hands, it can then enter the body where it can then begin to spread, causing sickness.

To destroy the virus’s protein wall, UVC radiation needs 222 nanometers of radiation to penetrate the virus, according to the World Health Organization.

A nanometer is one-billionth of a meter. To give a perspective how big a nanometer is, a sheet of paper is about 100,000 nanometers thick, according to nano.gov.

There are three types of UV radiation – UVA, UVB and UVC. The robotics company is using UVC radiation, which has the shortest wavelength. It is also the most dangerous type of UV radiation, the World Health Organization reports.

Everyone is exposed to UV radiation from the sun, which is the strongest source of ultraviolet radiation. As sunlight passes through the atmosphere, all UVC and most UVB, which has the second longest wavelength, is absorbed by ozone, as well as water vapor, oxygen and carbon dioxide.

The CDC has recommended that people wear a mask, stay at least six feet away from another person and wash their hands for at least 20 seconds to keep from contracting COVID-19. 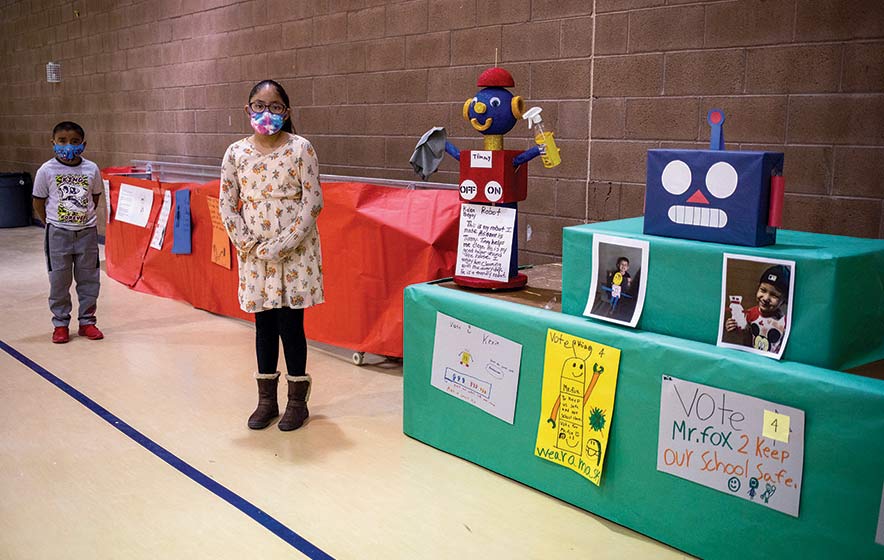 So why now introduce the virus-killing robot into the mix?

“We’re really happy to take all these extra steps and go above and beyond safety measures for our students and our staff, because having the kids in our building is one of our greatest joys,” Sanchez said.

“Right now, we do have about 70 kids that come to school every day,” she said. “To make sure that we are sanitized, and we are clean, and also, like I said, to keep learning and engaging fun. So, we’re really happy to have our kids in our school building.”

“This is just an added level of protection for our schools, obviously,” Hyatt said.

What the UV robot can do is destroy the COVID virus by shining UVC light onto surfaces, like desks, doorknobs, walls even the air.

On Friday, after debating on whether to fully reopen schools on the reservation, the Navajo Nation Council voted to table the legislation, sponsored by Carl Slater, until July.

On Tuesday, the Navajo Department of Health reported the UK COVID variant was detected in the Western Agency.

The UVD Robot website did not indicate that UVC light could kill the UK variant, but Molenar said to the small crowd of students and dignitaries attending the debut, the robot was capable of killing all pathogens that could be found in a school.

For fourth grader Kylynn Cadman, from Tohłakai, New Mexico, who won the robot-naming contest, the robot is “cool looking.”

“I chose his name because I love animals,” Cadman said, explaining why she chose a fox. “I think they’re smart and quick. I wanted the robot to be smart like a fox.”

Her grandmother, Pearl Cadman, said her granddaughter was doing online schooling. When the school reopened to students, she said she was not uncertain about whether to send her back to attend school in person.

“I kind of hesitated for a while because, you know, concerned for them not to catch the virus but as you know, they were saying they’re gonna, they’re gonna be bringing a robot to clean the school and stuff so I felt a little better,” Cadman said.

Hyatt said 37 robots will be deployed throughout the Gallup-McKinley County School District to start killing the COVID-19 virus.