Tonalea hosts ‘Back to school Bash’ after 5-year hiatus: Leaders encourage youngsters to stay in school 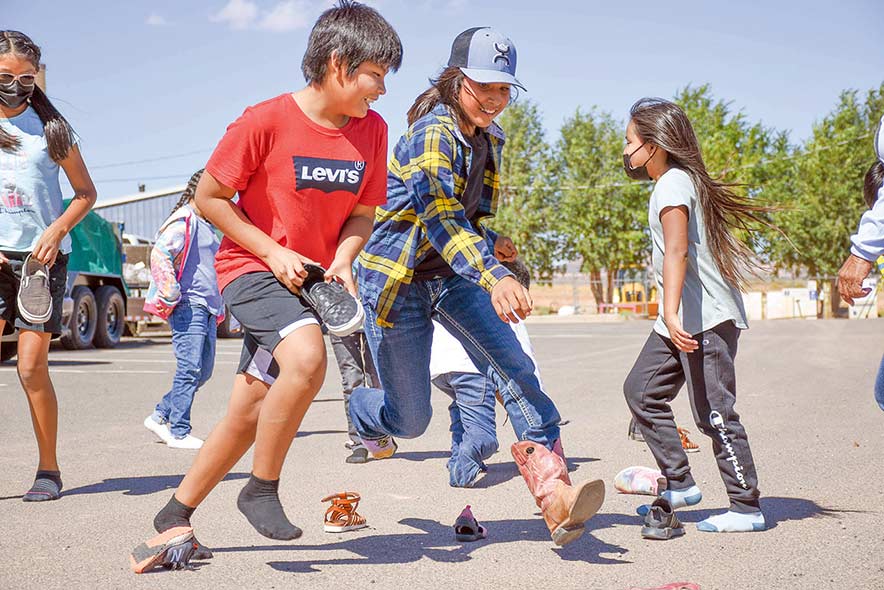 Navajo Times | Krista Allen
Youngsters scramble for their shoes in a relay race during Tonalea Chapter’s second Back to School Bash on Saturday morning in Tónehelį́į́h, Ariz.

When she grows up, she wants to become a police officer.

In the meantime, the 6-year-old kindergartener looks forward to playing with her friends during recess at her school in Tónaneesdizí.

“It’s kind of good,” she said of the new school year. “We (students) go to the playground at school.”

Redbarrel was only about 3 years old when the coronavirus entered the U.S. She said she doesn’t know much about COVID-19, but it was frightening and the humblest of face masks was “scary.”

At the start of the pandemic, Watson said she was worried that she would transmit the virus to her toddler, who was now 4 years old and in prekindergarten – having never stepped foot in a classroom until recently.

Last August, a Canadian public health agency suggested that babies and toddlers are less likely to bring the virus into their homes than teenagers. Still, they are more likely to spread it to others once infected.

“He was at home for three years, and it’s the first time (he’s) going to school,” Watson said. “He’s only in pre-K, so my biggest fear was the cleanliness of the school because he’s the only child that we (her family) have at home.

“That was my biggest fear – wearing the face mask in school and washing their hands all the time,” she said. “But he’s doing pretty good on that, especially when they’re (her son and his classmates) playing outside.”

Students in the Navajo Nation recently returned to class hopeful for a more stable year as they recoup learning losses from the Covid pandemic.

Families at Tonalea Chapter’s “Back to School Bash” said they have been counting on the upcoming school year to bring a return to normalcy.

To adjust to a new normal, the chapter administration and its leaders hosted the daylong event on Saturday to celebrate the end of summer and the start of the school year with games, music, giveaways, refreshments, and lunch.

All students who attended the event got a free backpack with school supplies, and their families/guardians got hygiene kits. 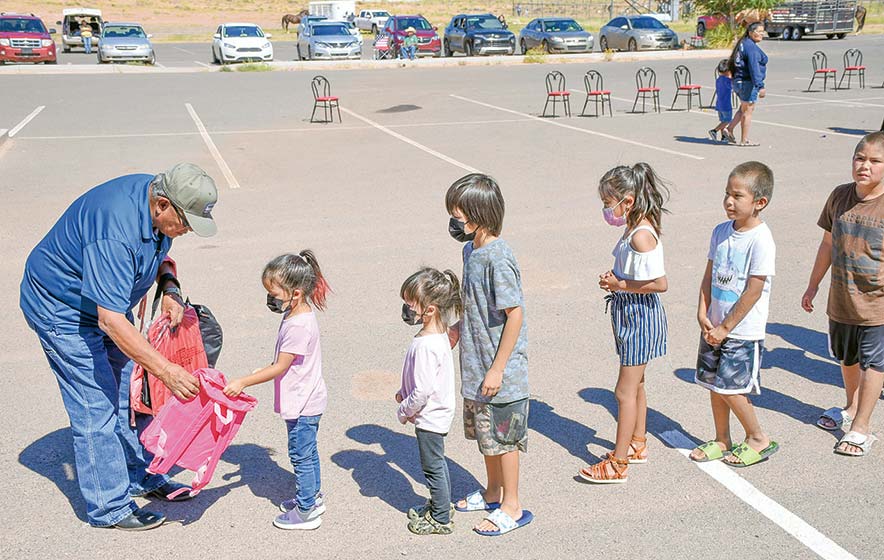 Local leaders say people can either wait for ordinary life to return or start living, so they organized the “Back to School Bash” for the students.

“This is our second one after all these years,” said Marlinda Whiterock, the chapter’s secretary-treasurer, who was the chapter manager in 2017, when the chapter hosted an inaugural back-to-school event.

“I was working with the chapter administration and the chapter leadership to bring it (event) back … for the youth and their education, their goals, their accomplishments, and what it takes,” said Whiterock, who believes the youngsters will return home one day to lead the chapter and learn the culture, concepts, and institutions of the Navajo political system.

“One day, you’ll be a politician here as a chapter official or a Navajo Nation president,” Whiterock told the students.

Whiterock said the leadership’s goal is to host another back-to-school event next year.

“That’s how events and projects – water and powerlines, bathroom additions – come about,” she said. “It’s the entire Tonalea community. That’s how a lot of these funds are coming in because they’re all registered.”

“I wrote them (NTEC) a letter asking them to help our students,” Begay said. “They donated backpacks containing school supplies.”

“Things like this, we’re helping our students,” Tso said.

Majerle D. Lister, pursuing a doctoral degree in geography with an emphasis in development at the University of Arizona, told youngsters that higher education is important and influences students’ career interests.

Lister said he’s worked as a research assistant at Diné College’s Diné Policy Institute in Tsaile and worked at his chapter house, where he learned the dynamics of Diné politics and the inner workings of the three branches of the Navajo government.

He told students that after graduating from Arizona State University with a political science degree, he was lucky to get a job in the Nation.

“I learned from just talking to everyday people,” Lister said. “For me, that really prioritizes – we need to listen to community members (and) people that don’t generally have a say in these kinds of decisions.

“Most of the time, it’s made by politicians with very little community insight,” he said. “But I learned a lot more about Navajo issues, about the local government as well as the people who came and interacted with me.”

Lister ended his talk by pointing out that students’ interests will change over time.

“And that might be a little nerve-wracking because I know it was for me,” he said. “But if you follow your interest and you take those interests seriously, you’ll be able to accomplish a lot, and eventually, you’ll find out what you want to do in life.”

Lister said his goal is to end up teaching on the Nation and his decision is based on his interests throughout his school career.

“Just take your interests seriously,” he told the students. “And always keep an open mind of things.”