Out of millions of rock and plants species, I know the Navajo name for rock, plants and only one plant that I can identify and name in Diné language – Tsé, ch’il, and Gad.

Rocks and plants are everywhere around us, but we rarely stop to feel them or study them intently. Many are not taught the purposes of rock and plants in Navajo upbringing. We just take for granted that they have some uses and that they will always be there.

Traditional medicine people, however, are the ones who can identify a few by their Navajo names and uses in ceremonies. Of course, geologists and botanists know much more. 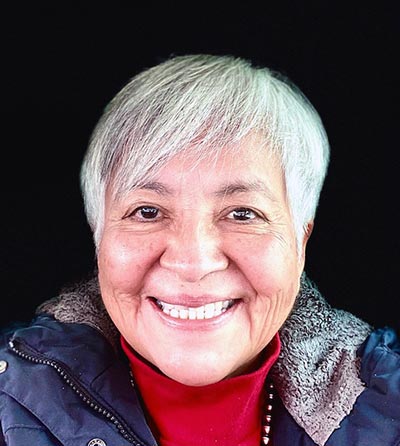 Arnold Clifford is probably the only Navajo who is a geologist and botanist practicing on the vast Navajo Nation. He has a ton of traditional Diné knowledge connecting rocks and plants to the culture. Of course, he has studied rocks and plants since he was a child.

Growing up in the Beclabito area of Northern Navajo, his extensive knowledge of rock and plant life began with teachings from parents and grandparents. Finding that he had a lot of time while sheepherding, he discovered rock formations and florae near home and wanted to know more about their existence.

His grandmother, Sarah Charley, explained the names and uses for each plant for medicine, food, and rug weaving while his father, a miner, talked about mining metals and minerals for different uses.

Later as a young man, Arnold studied mining in college, which led to geology (study of rocks) and botany (study of plants).

His mother, a weaver, taught him resilience and discipline, he said.

Visiting him on a warm windy day recently in Beclabito, a small community about 20 miles west of Shiprock and only two miles from the Arizona border, he was very hospitable.

The Carrizo Mountains are just west of his backyard. An abandoned and cold house sits with gaping holes from the north, surrounded with a lot of knickknacks.

Dust covers old floor tile. Several rooms hold the precious collections of rocks and plants in carriers. In the front room sit tall heavy metal cabinets with plants and smaller cabinets full of rocks. In one cabinet, rock types are sorted by shelves.

As he opened his first cabinet, he showed his rock collection first, rapidly naming the types, where they were found, and their history.

Trying to write as fast as Arnold spat out unfamiliar names, I finally put my pad down and just listened.

He had so much knowledge on his rock and plant collections. Showing me a “backbone of a dinosaur,” I was afraid to touch one but he handled them like they were his treasures – and they were treasures!

He displayed the million-year-old fossils of marine life and duck-billed dinosaur tails with marrow fossilized into rock.

“These are from the Cretaceous period, 144 million to 66 millions of years ago,” he explained.

Arnold described how Earth had gone through formations over the millions of years – about basins, ocean life and the formation of rocks.

He expounded on the Navajo Nation and surrounding areas with volcanic activities changing the structure of the land to what it is today with rock developments and different plant life.

I asked how he knew so much about rocks and plants. I could only remember vaguely the three kinds of rock – igneous, sedimentary and metamorphic – from elementary school.

He explained that rocks and plants change over time, some in a year, some in millions of years and that those who are not students of biology and botany do not detect the changes.

He said that to study plant life, one needed to understand rock first. Rocks have layers of life. Each rock layer is endemic to its own accompanying plants. There are about 370 endemic plant species on Navajo land not found in any other parts of the world, Arnold explained.

In traditional Diné culture, he explained, “Every rock and plant has life and its purposes. One cannot just pull a plant or disturb a rock. It is sacred, it is a part of our nature.
“One must ask for permission of removal for human or ceremonial purposes,” he said. (I did remember that philosophy from my childhood.)

As a young boy, he and his friends could do whatever they wanted.

“There was no one to tell us what to do and we explored all over the open areas,” he said.

In the open areas, he would look and study the rocks and plants he came across.

“Back then there was no ‘Yiiyah, don’t touch this,’ and we picked up plants for ceremonies too,” he said.

Subsequently, as a college student, he has journeyed all over the Four Corners area into New Mexico, Arizona, Utah and even California to search for rocks and new plant species.

With a degree in geology and studies in botany, Arnold started collecting more rocks and working with each plant he had amassed over the years. He also started teaching, lecturing, and working with schools such as Harvard and other universities in New Mexico, Utah and Arizona.

He has over 24,000 plant species in his collection. His geologic collection numbers about 4,000 rocks.

Here in his workspace, he continually works on identifying, indexing and preserving his collections. Most of his work is the plants, which are handpicked from all areas of Navajo land.

His laborious time is mostly spent pressing parts of a plant onto an acid-free board. These will eventually go to collections in botanical gardens and museums after his new book project is done.

Arnold hopes to publish his own work into two volumes. The first will be divided into geology – the stratigraphy (layers of rock), structural geology (geometric relationships of rocks and geologic features), landforms, and a summary.

The second will be ethnobotany, which is the Navajo classification and stories of plants, and on monocots and dicots – reeds, stems, roots and flowers.

His first collaboration has resulted in a huge volume about plants, “Flora of the Four Corners Region,” with Kenneth Heil and others.

He is proud of his accomplishments thus far. He has identified about 98% of all flora on Navajo land – and more species are there to be found.

Arnold believes that learning is particularly important, especially for youth.

“We need to make space for learning,” he said. “As an adult, when you have knowledge, you have to give out and make room for new learning.

“What I know is not mine,” he said, “it belongs to all Diné. It is all tribal knowledge. We cannot be stingy and hoard knowledge. We need to teach.”

I left with a little more knowledge of Navajo traditions regarding rock and plant life and maybe another plant in Navajo, doo whoozhi.