Last Tuesday, Election Day, I had the awesome task and responsibility to be an election protector. 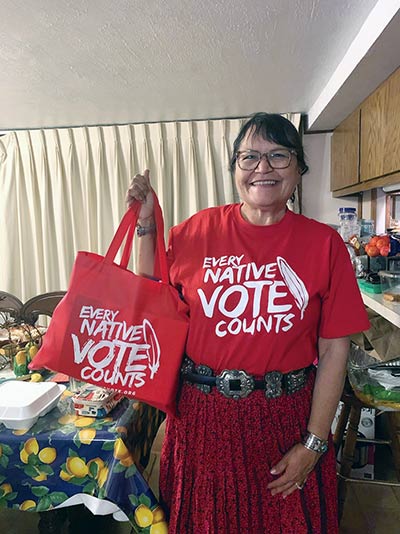 I answered the call to volunteer with the Native Vote Election Protection initiative to monitor and troubleshoot issues that may arise with Arizona Native people exercising their right to vote in state and federal elections.

Volunteers from the Indian Law Clinic of the Sandra Day O’Connor College of Law at Arizona State University trained us for our role, told us common issues that may crop up, how to respond, what the law requires, and if needed, provided access to a Native Vote hotline for back-up and support.

I was a “legal mobile volunteer” responsible for visiting multiple polling sites. I did this happily in my own home community of Round Rock and neighboring Rock Point and Lukachukai. I missed being amongst people, especially my fellow Diné.

Polls opened at 6 a.m. and I was out early. Following protocol, I first checked in to the Native Vote hotline, then found the precinct official and introduced myself explaining I was here to help voters should they have questions, issues, or if something did not seem right. I had my folding chair and set up 75 feet from the polling site. I did this at each of the precincts I was responsible for.

The tricky part was being in a place where I could safely interact with voters after they voted. I did not ask voters who they voted for or why – my role was entirely non-partisan. I did ask them, “Were you able to vote?” “How did it go?” and to those who didn’t hurry past me and gave me even the slightest eye contact, I said, “Thank you for voting.” I really meant it.

I knew this was an unprecedented election when the line at Round Rock seemed to form unusually early and did not let up once throughout the day. It seemed as if our small community had mushroomed overnight – everyone came out and everyone was waiting patiently to enter the chapter house to vote, first in the tribal election, then the state and federal, and then exit out the back door.

I saw so many relations and old friends. At Lukachukai, the largest precinct of the three, there were two lines, one for the tribal election the other for state and federal. Each line consistently had between 15 to 25 individuals.

Rather than get discouraged by waiting in two long lines back-to-back, voters socially distanced and visited with each other. I heard no complaining and never saw someone leave in exasperation. I was impressed with everyone’s sense of purpose of being there to vote no matter how long it took.

Rock Point had the same set up as Round Rock with one line for all elections. Even a herd of goats, not to be ignored, ran across the parking area causing a minor distraction and comic relief. I could not help wondering, where else would goats be part of the voting scene? 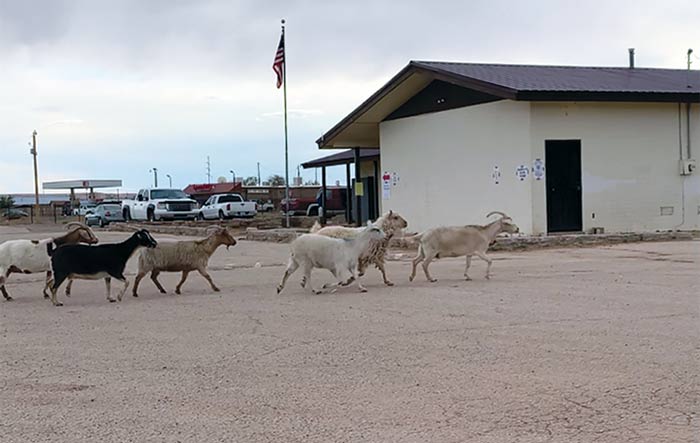 Courtesy photo | Faith Roessel
Sheep and goats aren’t allowed to vote at Rock Point Chapter, but that didn’t stop them from forming a line last Tuesday, where they provided some comic relief for the voters waiting for their chance to mark their ballots.

I learned much this Election Day. Most important to me was how many Navajo voters turned out to vote. What does that say? It teaches me that we understood this was not only a high stakes election but one in which our votes could make a critical difference.

And that we are a people that live and thrive amongst our own – we missed each other. Rather than COVID-19 scaring us from the polls, we embraced the responsibility to wear masks and properly social distance, forging ahead so we could see each other, safely visit, and exercise K’e, our world view and natural way of life. We all needed to see and be seen.

This was exemplified by one particular voter who was friendly as he approached the chapter house. After he voted I asked him how it went, and he said he drove 3? hours to vote in the tribal election. He said he had already voted by absentee ballot in the state and federal elections, mailing it back the day after he received it.

He stood there just taking in the scenery, being in his community and appeared happy even as he said he would be driving 3? hours back to his off-reservation home, where he worked.

I also learned how important is the issue of having an address for purposes of voter registration and for documenting where you live. Unless you are one of the lucky Navajo residents that has a post office box, you are left describing your physical address such as “two miles south of the chapter house off of Navajo route ‘X’ then east onto bus route ‘X’” – not exactly a conventional way to describe your address nor one that will easily fit on a form.

Also, I was surprised at how many voters went running past me saying they forgot their ID or they needed another ID to supplement their first ID. Having to show an acceptable form of ID is problematic and inhibits and even prohibits Navajos from voting. Arizona ought to follow other states such as Maryland that does not require ID for in-person voting.

Finally, what I found inspiring was young people voting, some for the first time, and elders continuing their strong practice of voting.

A young man asked me if this is where to vote and I pointed to the chapter house voting entrance. He went to vote and returned with a huge grin on his face.

I said, “You are a young person, is this your first time to vote?”

I congratulated and thanked him.

Another young couple tag-teamed each other with one of them watching their infant while the other voted. When mom went to vote I could hear their little one crying and poor dad was left to do his best. Going to vote for them was a “family affair.”

Throughout the day, I saw cars or pickup trucks pull up to handicapped parking spaces and a poll worker would come out and return with a ballot, translating and explaining the ballot in Navajo.

At Rock Point, I saw one elder request this help and was surprised to see Shima Lucy, my late mother’s sister, and her daughter. I air-hugged them from afar, Shima and me with tears in our eyes.

When I thought of our right to vote as Americans and how that franchise had been long deprived to our people, I was pinching myself on Election Day seeing how many Navajos exercised that right. I was humbled by what I saw and experienced – reminded of our human and inherent right to be Diné that previous generations fought for, with or without the ability to vote.

We – the citizens – are the government, whether it is state, federal or, most importantly, our tribal government. We may still be playing catch up and think we will never cross the finish line, yet we have an endurance and will to fight.

Our right to vote is that tool that we must use wisely for the greater good of our children, families, and community. Through our vote, we hold our leaders accountable and remain vigilant, informed citizens.

Faith Roessel, from Round Rock, Arizona, is a lawyer and former director for the Navajo Nation Washington Office who has represented Native peoples and interests for 40 years in Washington, D.C, the states and Navajo Nation.