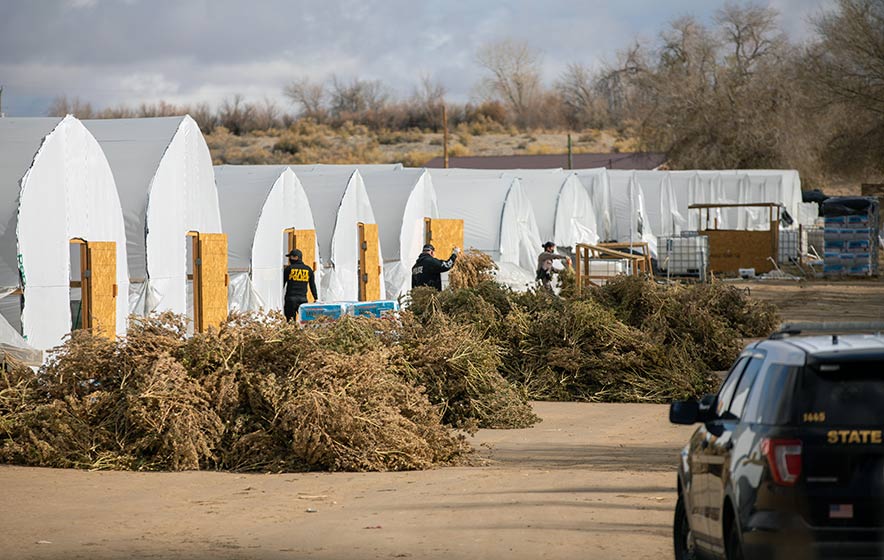 Authorities dashed down Mesa Farm Road in Shiprock early Monday morning toward one of Dineh Benally’s hemp hoop houses that had been built over the summer.

The road leads not only to Dineh’s and his father Donald Benally’s residence, it’s also where farms and hemp hoop houses are located. State, federal and tribal officers united for “Operation Navajo Gold,” a unified effort to execute search warrants relating to suspected illegal marijuana farming on the Navajo Nation.

“I think it was going to happen,” said Cyndi Frank, a resident who had pulled to the side of the road as she saw over two dozen marked and unmarked vehicles from the Navajo Nation Police, San Juan County Sherriff’s Office and New Mexico State Police. “I’m glad they got reinforcement with the state and federal,” she said. “It’s about time that there needs to be accountability.”

This action was the result of months of coordination between the Navajo Nation and local, state and federal agencies to enforce both Navajo and federal laws, stated a press release form Navajo Nation Attorney General Doreen McPaul.

“This operation is a testament to the unified partnership we have with our local, county, state, and federal law enforcement agencies,” stated Navajo Police Chief Phillip Francisco. “Although we cannot provide the community with additional information, we want the public to know that NPD and multiple law enforcement agencies have been working together to address this.”

During an Oct. 30 update meeting, Francisco, McPaul and other Navajo Nation authorities spoke to disgruntled residents who were tired of seeing Benally and other farmers continue farming hemp, which is illegal on the Navajo Nation. The meeting became somewhat tense as residents aired their frustrations out loud and urged Francisco to call the FBI to help.

At the time Francisco could not give details as to what was happening behind the scenes, but tried his best to reassure farmers and residents the police were doing everything they could. “I can’t tell you everything,” said Francisco to the community. “I know you guys are frustrated and tired of seeing it, but if we rush in there and do this wrong then he (Benally) will just get off … and he will be right back at it.”

The summer was a horrible one for Cyndi Frank because of the traffic, trash and smell associated with the hemp farms. “I pretty much stayed on my land and kept to myself,” said Frank about her summer when hemp operations were at their height and Benally declared farmers were free to plant what they wanted during meetings of the San Juan River Farm Board, of which he was president.

According to an anonymous source that is close to the investigation, Benally’s crops were not limited to industrial hemp, as he maintained. The source said federal agents and law enforcement found thousands of pounds of harvested marijuana and hundreds of thousands of live marijuana plants in the handful of farms they raided in the past two days. The plants are worth millions on the black market.

Police plan to reserve some of the pot for evidence and bury the rest.

“This current (Navajo Nation) administration is telling the people that these farms belong to the Navajo Nation,” said Benally during a July farm board meeting. “That is not true and that is what will go before the court.’

“As your farm board president, as your government tribal official, I believe these farms belong to the individual Navajo,” he said.

Benally moved to dismiss the Nation’s case against him on technical grounds, which were rejected by the court. After a hearing in September, the court granted the Nation’s motion for a temporary restraining order and preliminary injunction, which prohibited Benally, his companies and investors from continuing their “hemp” operations.

But even after these court orders Benally and other farmers continued with operations leading to the Nation to file an order to show cause. With evidence provided by Francisco and Navajo Nation EPA Director Oliver Whaley, who with his team inspected the farms, a hearing was set.

An order to show cause is “basically a civil penalty to someone who violates a court order,” explained Charles Galbraith, Navajo Nation special counsel, to the community during the Oct 30 community update meeting. “At the hearing Benally could’ve been incarcerated based on the ongoing violations,” he said. “She (Judge Genevieve Woody) has the authority to fine or imprison him; she ultimately wasn’t prepared to make a decision based on the pleadings that day. She continued that hearing and ordered the lawyers to file additional briefings.”

The hearing delay that day gave Benally more time to continue his operations, and Frank said she was upset over this because it gave Benally and others time to harvest their crop, pack up and leave. “There’s still activity going on,” said Frank. “I take pictures, record things … I have proof. It gave them enough time to get their stuff together so they could leave. It gave them a heads-up.” On Monday, approximately 50 non-Navajo hemp farm workers were found to be still working, according to the anonymous source.

During Whaley’s inspections in September, he said when they showed up at farms some workers would stop everything and try to hide. From Mesa Farm Road there are some abandoned hoop houses clearly visible, some are hidden behind trees or far from the road concealed by tarp-covered fences. The hoop houses that were in clear view gave a glimpse at how the land had been trashed.

Destroyed or torn hoop houses were empty as trash and plastic blew from the site. Whaley had listed numerous environmental violations found at these farms during his inspections. Based on an extensive inspection and review of the farming operations, the Navajo Nation EPA estimates that operations grew to include over 1,000 greenhouses on more than 400 acres of land, and in many instances may have violated both Navajo and federal environmental protection laws.

“The lands of the Navajo Nation belong to the Navajo people who depend on it for survival,” stated Whaley in a Navajo Department of Justice press release. “The Navajo Nation EPA will continue to work to ensure the lands are safely and properly restored to their proper state following the abuse of these farming operations.”