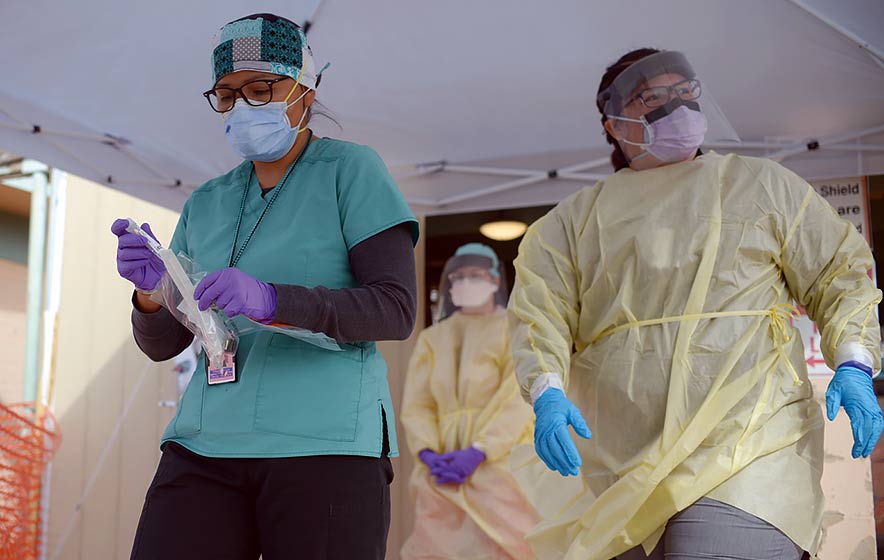 Navajo Times | Donovan Quintero
A worker at Gallup Indian Medical Center bags a sample from a person who underwent a nasal swab for COVID-19 testing. The Pfizer/BioNTech vaccine, the one undergoing clinical trials on the Navajo Nation, has proven so far to be safe and 90 percent effective, the company announced Monday.

The research team leading the Pfizer/BioNTech vaccine trial on the Navajo and White Mountain Apache reservations was “really happy and really excited” to hear Monday that the vaccine has so far proven to be safe and 90 percent effective in preventing COVID-19, said Deionna Vigil, Nambe Pueblo, research program coordinator for the Johns Hopkins Center for American Indian Health, which is conducting the local trial.

“We’ve heard from a lot of our participants that they’re really happy too,” she added. She cautioned that “a lot more data needs to be collected” before the vaccine can be granted emergency approval, which Pfizer could ask for as early as this month.

So far about 100 Apaches and Navajos have volunteered for the study. Johns Hopkins was initially hoping for 200 to 300. To assure it will be effective in the general population, the trial must include people of both genders, a wide spectrum of ages and as many ethnic groups as possible. But Vigil said the phones have been lighting up since the news broke that the vaccine seems to be effective and has no major side effects. “Some of our participants are telling their friends about it, and I think that really helps,” she said.

Vigil said while she has the floor she’d like to clear up two common misconceptions about the vaccine: No. 1, it can’t give you the coronavirus because it doesn’t have the virus in it; and, No. 2, it is not a government plot. “This is Pfizer doing this,” she said. “It’s not part of Operation Warp Speed (the Trump administration’s effort to fast-track a vaccine). Government has nothing to do with it.”