The May 30 “Remembrance Ceremony” on Navajo Nation Memorial Day was well attended after two years of no public gatherings.

Approximately 100 people attended, including both the president’s office and delegates of the Navajo Nation Council.

The Upper Fruitland veteran color guard performed a 21-gun salute and taps to honor and remember the sacrifice of the many soldiers, airmen and seamen who gave their lives for their homeland, America.

They also conducted a re-flag folding ceremony for families who brought a loved one’s flag. The U.S. flag represents freedom and the pride we have for our homeland, our country.

Today, we remember all the men and women who died while actively serving their country in one of the armed forces. It is a day for many to come together, in remembrance of our fallen heroes and to never forget.

The Navajo-Hopi Honor Riders rode in as they arrived at veterans Memorial Park in Window Rock to take part in the remembrance ceremony. President Jonathan Nez thanked the honor riders for their continuous support for military families throughout the year.

The upcoming annual Lori Piestewa Navajo-Hopi Honor Ride will be one-day trip from Veterans Memorial Park to the Piestewa residence in Flagstaff on Saturday, June 11.

The Navajo-Hopi Honor Riders board plan to have an outdoor ceremony at the beginning of the ride, with Nez welcoming the riders on Saturday morning.

A remembrance gathering will be held at Ganado Chapter and at the Hopi Tribal Complex in Kykotsmovi.

The ride will end with a closing ceremony to honor and remember all fallen heroes at the home of Gold Star mother Percy Piestewa in Flagstaff.

On March 23, 2003, U.S. Army Spec. Lori Piestewa was the first Native American female killed in action on foreign soil. She was enrolled in the Hopi Tribe, a mother of two children, and was only 23 years old.

She was a part of 507th Maintenance Company and her unit was ambushed in Nasiriyah during the Iraq War.

The honor riders first began riding in 2003, when Spec. Piestewa was brought home to her final resting place in Tuba City. 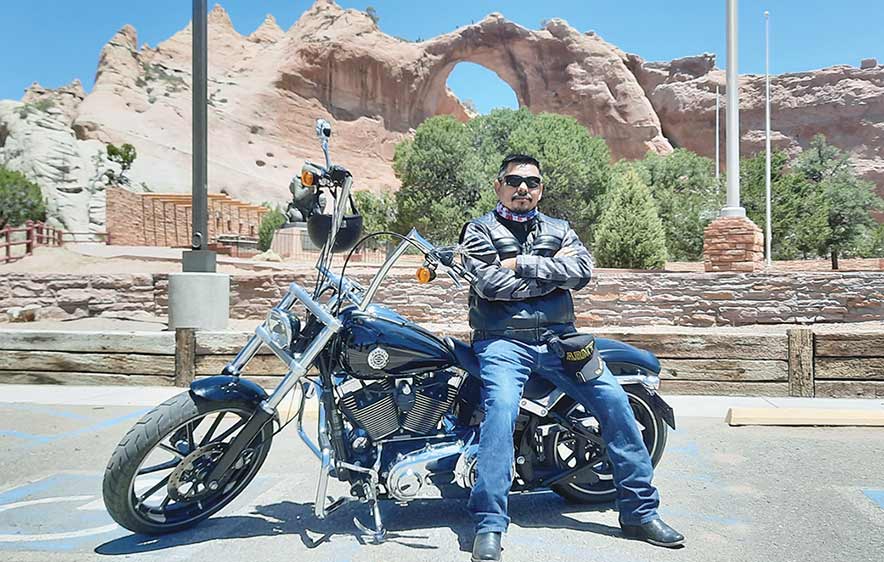 Courtesy photo | Geri Hongeva-Camarillo
U.S. Army veteran Art Hardy Jr served as communication specialist from May, 2001, to May, 2005, and is the newest board member for the Navajo-Hopi Honor Riders.

Today, the NHHR is comprised of honor riders, volunteers and military families. They serve all armed forces, past and present, and dedicate their time to honor and support Native American military families through motorcycle escort service, community volunteer projects and also build awareness of issues and challenges that affect servicemen and women.

In February 2022, the Navajo-Hopi Honor Riders gained a new board member from the Greasewood Springs community – Arthur Hardy Jr. He fills the fifth vacant seat for this nonprofit organization.

Hardy served in the U.S. Army from May 2001 to May 2005 as a communication specialist. He is active in his community by serving on a variety of committees: Fort Defiance Agency Veterans Committee, Greasewood Springs Community Land-use Committee, Navajo Nation Veterans Advisory Council and commander of Veterans Organization for Greasewood Springs Chapter.

Hardy has a passion for volunteering for nonprofits for military families. He has a family, is career-oriented and enjoys playing his guitar. He is currently working as a legislative district assistant for the Delegate Raymond Smith Jr.

He has ridden motorcycles for 25 years. You might see him riding his Harley Davidson Breakout around the Navajo Nation.

Hardy said, “I believe that any organization looking for support should start with educating the community. When you have a collective thought, idea, goal or perception, it becomes relatively easy to congregate.

“It is through this type of process that brotherhoods are formed or based upon,” he said. “I’ve helped with the veteran home construction in Wide Ruins and based on what I witnessed, I wanted to be more involved and become a productive member.”

There is no membership fee to ride with the Navajo-Hopi Honor Riders. A participation form and rider safety acknowledgment form are completed at registration before each ride.
Merchandise will be for sale, such as caps, Red Friday T-shirts and the annual honor run T-shirt.

Geri Hongeva-Camarillo is a board member for the Navajo-Hopi Honor Riders Inc.