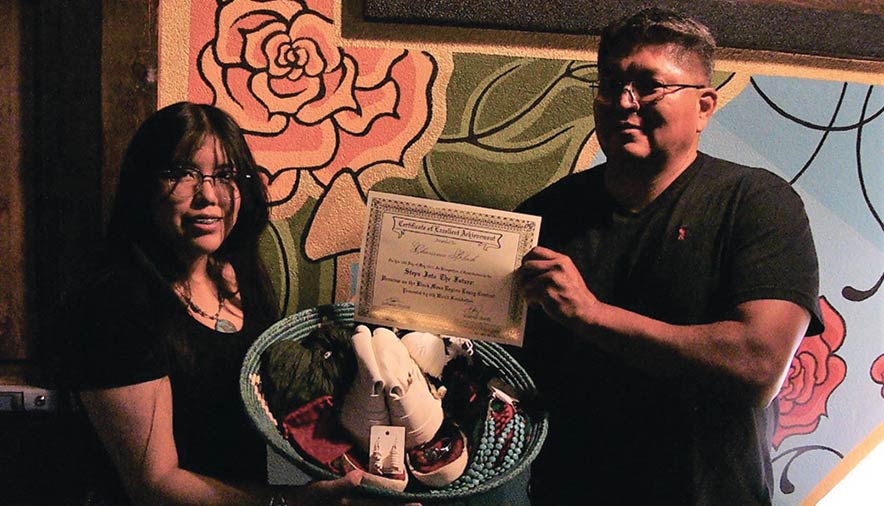 Charisma Black, along with other students from northern Arizona, took on a challenge issued by the 4th World Foundation to research uranium mining effects on Black Mesa.

Each writer was also asked to propose actions to limit exposure to radiation.

Black was named the winner of the contest in April. On May 13, she accepted the $500 scholarship award along with a large hand-woven basket filled with traditional clothing and jewelry.

Tommy Rock, an alumnus of Northern Arizona University’s School of Earth Sciences and Environmental Sustainability, presented the award to Black.

Black’s extended family is from the Pinon, Arizona, area of the Navajo Reservation. But her immediate family moved to Phoenix when she was young.

She returned to northern Arizona about two years ago, and is a graduating student of Flagstaff High School. Only 18 years old, Black has spent a lot of time thinking about uranium.

“My greatest concern was for family members,” Black said. “Uranium has shortened my time with some of them. We have to take care of them. I hope things can change for everyone, not just us Navajo and Hopi people.”

Her awareness of the uranium issue began when she was 10 years old.

Her mother, Marschelle Honeyestewa, went to college to learn how to address this and other issues affecting the people of the Four Corners region, Black said.

“I remember my family mentioning it, but I didn’t think much about it,” Black said. “There was not that much coverage about it. But as I grew older, and I saw that our language was dying, I decided to become more invested in my culture.

“Because we lived in Phoenix, we didn’t get to visit our family very often,” Black said.

The time she did get to spend with her family on the reservation was precious to her.

“My grandpa was a coal miner, but he was exposed to uranium, and he wasn’t as healthy as he could have been,” she said. “He suffered from diabetes, problems with his kidneys, a heart condition, and uranium exposure.”

Black explained that she is not big on social media, so the “small things” in life mean a lot to her, like seeing her family.

“I am the brightness in people’s day by being silly, being sarcastic,” Black said.

She admitted to being the comedian in her family, using her sense of humor to lift family and friends on a daily basis.

Black said it was still hard for her to accept she has won the essay contest.

“When I think of contests, the best thing I can imagine is counting jelly beans in a jar,” Black laughed. “But it’s easy to write things down that you are passionate about things you care about, things that affect your family.”

Black’s essay spoke to the environmental reality of living on Black Mesa.

“Uranium is a big issue because it contaminates the water source from underground aquifer of both Navajo and Hopi,” Black wrote. “Water that is accessed is being not only depleted at a dramatic rate, water is also undrinkable in areas that only have wells and windmills for drinking.

“This impacts their health, their livestock, their fields, etc.,” she said. “It is becoming unsafe, uninhabitable and unsustainable to live on the land in Black Mesa. New disease and sickness have come to Black Mesa.”

Black concluded that people “have to participate and learn better ways to keep our land, air and water clean for our peoples, animals and other species. We need to continue the advocacy and organizing to bring attention to the issue of uranium contamination on Black Mesa for sustainability, healthy communities and future generations.”

Black was grateful for the cash award but the basket of traditional clothing is what she spoke about.

“My family has had to share traditional wear for ceremonies, graduations and weddings,” she said. “These things are hard to come by. I am proud to have my own jewelry and regalia now. It’s my culture.”

Somana Tootsie, the director of the 4th World Foundation, was on hand during the dinner held in Black’s honor.

Tootsie said that the contest was designed to get tribal youth in the region talking about the larger picture of environmental awareness and responsibility.

“This was an opportunity for young people to hold a conversation with their family members about the effects of uranium on their tribes and neighbors,” Tootsie said.

“We received amazing responses and great ideas on what to do to get more attention on the need for the removal or remediation of radioactive materials left exposed throughout northern Arizona,” she said. “We wanted to get them interested in science.”

Tootsie pointed out that having traditional support is important for Native youth. Being able to include the clothing and jewelry as part of the prize was very important to her.

“Not all of our kids have access to traditional goods,” she said.

The basket, she explained, was assembled after the winning essay was chosen. Had the winner been Hopi or another tribe, or male, the basket would have reflected that winner.

Rock grew up sharing Black’s concern about environmental issues, and like her, he sees the issue as something affecting all people in the region, not just the Native population.

He grew up and continues to live in Monument Valley—its iconic “mittens” rock formations are known to all western film aficionados worldwide, especially those starring John Wayne.

But what most don’t know is the impact that uranium mining has had on the area.

In the Navajo language, Black’s home is called Aljeto, which means “Moonlight Water.”

Many areas across the reservation were named in reference to water—which was once plentiful. Not so much now.

“There was a pond there at one time, and the moon reflected off of it,” Rock explained. “It was named for that.”

Rock concentrates on the future of uranium and radiation, and how it effects the air and water quality as well as its effects on human, animal and plant life.

Exposure is not limited to the Navajo, Hopi and other tribes of the region. Radiation from the nuclear testing begun during World War II has created “downwinder” victims across the country to the east.

He finds hope that more people are working the devastating effects of the uranium industry.

“We have many grass-roots organizations addressing uranium,” Rock said. “The University of New Mexico has undertaking a study on uranium exposure. Amended by these studies, we have better access to health care from exposure.

“The Navajo Nation Environmental Agency has been stepping up,” he said. “We have the Dine’ Uranium Remediation Advisory Committee, which I sit on.”

The uranium industry has definitely affected drinking water across northern Arizona, and people need to be informed of that fact, Rock said.

“We all must face the reality that we need access to potable water,” Rock said. “Not just for us, but for future generations. We need to be informed.

“We live off the land, and uranium has a great impact on our environment,” he said. “We have to educate tribes, chapter houses, communities, and tell them what we are learning, what we are doing.”

Rock is a very busy man. But his involvement in the 4th World Foundation’s essay contest was very important to him.

“I know my time needs to be more useful, but this is important to me,” Rock explained. “I like to see the upcoming youth being involved in environmental issues. I like that.

“It’s a way to go back to the community,” he said. “Not just for us, but for our neighbors. It’s great to see the next generation informed and able to pick up the fight and continue the work we’ve done.”

Sandra J. Wright is press officer for the 4th World Foundation. She was a freelancer for the Navajo-Hopi Observer and Tutunveni newspapers.