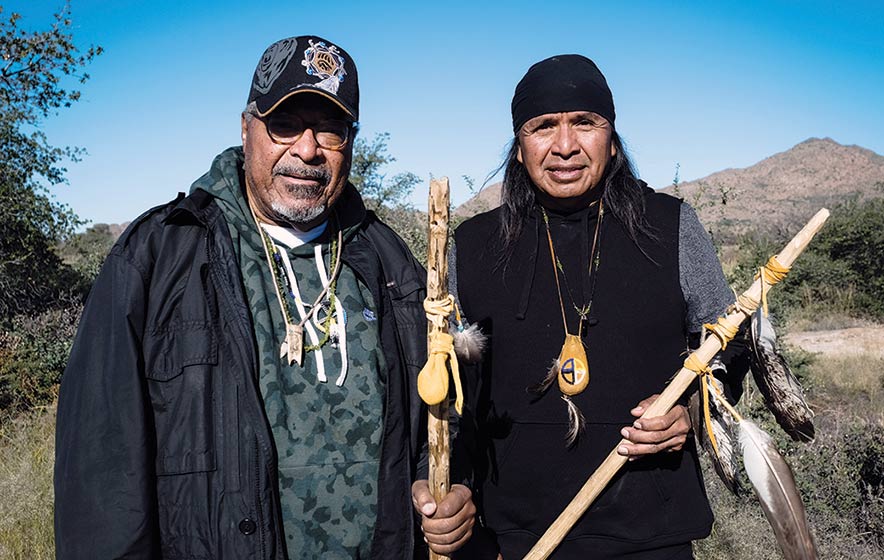 Rev. John Mendez, who retired in 2019 as pastor of Emmanuel Baptist Church in Winston-Salem, has his whole life been engaged in the struggle for social justice.

He has come to San Carlos Apache Reservation to join his longtime friend of 30 years, Wendsler Nosie Sr., spiritual leader of the Apache Stronghold, on an important spiritual convoy that begins this week to the 9th Circuit Court in San Francisco for a hearing on the 22nd where the Apache religion will be on trial, a religion that seeks to protect not only sacred Oak Flat from destruction, but to protect all of Mother Earth and all the future generations to come.

Mendez said, “I had to come.” And he has been coming to support the Apache Stronghold now for 30 years joining efforts to not only protect Mount Graham and Oak Flat, but to recognize the Apache and all Native religions as authentic and legitimate religion that must be recognized and protected.

John first came out to visit the Apache with the National Council of Churches in the early 90s in efforts with the council to recognize the legitimacy of Native religions as well as to learn how to decolonize Christianity by joining efforts to protect sacred sites.

John says this is when he got a calling. On Mount Graham he had a transformational religious experience that went through his whole body like lightning.

This religious experience later drew to mind lessons he had learned from the black Christian mystic Howard Thurman, who had been an important mentor to the Rev. Dr. Martin Luther King. Thurman played a pivotal role in leading Rev. John Mendez to return to the ministry.

John said, “Thurman talked about the interrelatedness of religions and he had some very deep comments about Native people that opened me up to hear, to see, and to understand the connection between black struggles and the struggles of Native people.”

But it was this specific passage by Thurman that opened John up:

“The American Indian is the only indigenous people within the confines of American sovereignty. The merciless and ruthless attack on the ground of community in the life of the American Indian is completely amoral: To uproot him from territory that gave him a rare sense of belonging, in which he could actualize his potential within a frame of reference that was totally confirming, and at the same time to keep him in full or relative view of his devastated and desecrated extension of self that the land signified is a unique form of torture, a long, slow, anguished dying. The original insider is forced to become an outsider in his own territory. There are some
things in life that are worse than death — surely this must be judged as such.”

Mendez said that along with his home church and the larger Progressive National Baptist Convention, which was founded to support King, they never questioned the authenticity and legitimacy of the Apache religion.

In fact, in 2013, they awarded Wendsler Nosie Sr. the Convention’s highest honor of the President’s Service Award in part for his efforts to protect religious liberty.

The Apache religion remains under threat as the U.S. continues in its colonial history of failures to recognize the Apache religious freedom that cannot be separated from their way of life and ceremony connected to the sacred Oak Flat area.

If the U.S. gives Oak Flat away to Resolution Copper, it will lead both to the destruction of that sacred land as well as the religion and identity of Apache people.

Rev. Mendez tells us that he is here for this spiritual convoy for ‘One Drum, One Prayer and One Circle’ to not only protect the Apache religion, but also because, “Native people have so much to give us. Their religion should be seen as a gift to all other religions in that it may be the only way to save our planet by calling us all back to the whole meaning of creation and to the sacredness of it all. If we recognize the sacredness of it all we will respect it.

“As decolonizing Christians,” John tells us, “we must struggle for that oneness, for the sacredness of all life.”

This country has from its inception placed the profits and interests of corporations and wealthy colonizers over our responsibilities to each other as humans and the protection of all creation.

The U.S. continues to dispossess indigenous people of their lands and deny the value and validity of their religion. But it doesn’t have to be that way.

This upcoming court hearing on the 22nd is an important effort to change our ways, but there is also a much larger spiritual battle we must all face. While Oak Flat and the Apache spiritual way of life is under imminent threat, we must wake to realize that all of creation is under threat because of the greed of the U.S. settler colonial and capitalist way of life.

We, the people, can and must rise up and demand change if there is to be a future. And to truly change, we must listen to the spiritual guidance from the Apache and decolonize our way of life. We can begin even now by saying that these acorns, mountains and canyons and the Ga’an spirits at Oak Flat that keep the Apache way of life alive are more important than allowing a foreign mining company to buy off politicians in order to mine the copper out of the ground and destroy Oak Flat forever.

Rev. John Mendez who comes in support of the Apache religion as a decolonizing Christian reminds us that possibly in a profound way the Apache are giving Christians an opportunity and gift to return to the religion of Jesus Christ. For the institutions of Christendom have too often through history left the message of Jesus to side with the powerful to justify the greed of capitalism and the destructive forces of colonialism. Returning to Howard Thurman, he wrote, “Too often the price exacted by society for security and respectability is that the Christian movement in its formal expression must be on the side of the strong against the weak. This is a matter of tremendous significance, for it reveals to what extent a religion that was born of a people acquainted with persecution and suffering has become the cornerstone of a civilization and of nations whose very position in modern life too often has been secured by a ruthless use of power applied to defenseless peoples.”

Jesus himself before beginning his ministry was visited in the wilderness by the evil one who offered him a path of domination and power instead of the path that Jesus calls us all to of love and resistance to empire.

We hear from Jesus in his sermon on the mount a question as relevant for us to answer today as it was then. Will you serve God or will you be a servant to the system of money and greed?

Jesus said, “No servant can serve two masters. They will either hate one and love the other or be devoted to one and despise the other. You cannot serve both God and money.”

This country from its first chapter has chosen to serve money. As Wendsler Nosie Sr. reminds us, we will never heal as a nation until we understand and face this first chapter and ask again with Jesus where your loyalties lie.

Wendsler and the Apache Stronghold have an answer.

“The only loyalty I have is to what God gave the world,” Wendsler says. “It’s what God gave us – that’s where our loyalty should be.

“It is so true there has to be a new narrative, a new birth. What we call healing. We have to look at ourselves. If we don’t, how are you going to heal?”
We, as a nation and as individuals, have an opportunity now to choose to serve God instead of money. This is the gift and message of the Apache Spiritual Convoy for us all — to defend all of humanity with one prayer, one drum and one circle.”