Sh’hasin committee to decide how to use $554M settlement funds 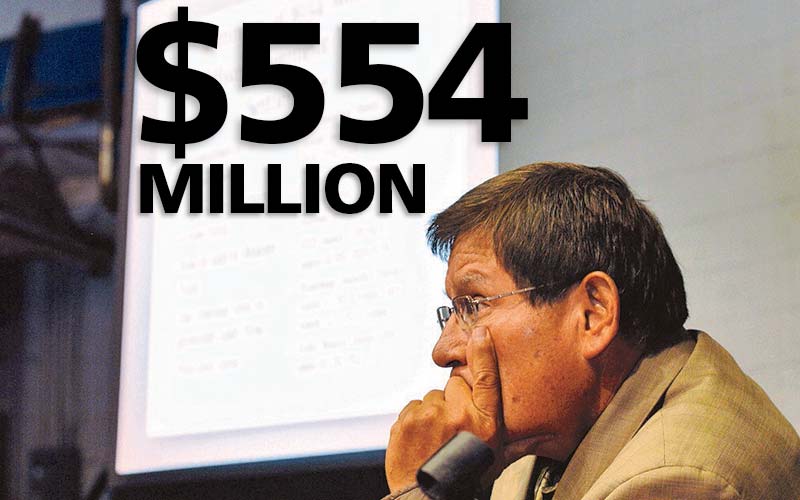 Times photo illustration: Speaker Pro Tem Lorenzo Bates at public hearing on what to do with $554 million trust settlement.

By LoRenzo Bates
Special to the Times

For several weeks and months, my Council colleagues and I, as well as many others, have received numerous inquiries regarding the status of the $554 million settlement funds received from the federal government several months ago.

First and foremost, I must make it very clear that the funds were transferred to the S’hasin Fund, which is a separate account established by the Council to hold the funds until legislation is drafted and approved by the Council to designate the funds for usage and/or investment. The funds remain safely in the account to which §·no one has access to aside from the controller – absolutely no other officials, elected or non-elected, have access to the funds.

The net amount of $509 million remains in the S’hasin Fund. Lawyer fees were paid to the law firm that led the negotiations with the federal government on behalf of the Nation and were contingent upon the overall settlement amount received.

The net amount requires legal guidance from Navajo Nation Council in the form of legislation. This legislation will detail the purpose of the funds, as well as the timing and amount needed from the invested funds for cash outlays. Based on this legislation the Investment Committee will need to prepare an investment policy as well as a cash flow schedule. This ensures the cash is available at the time it is needed.

In accordance with a directive issued by the Council’s Naabik’iyátí’ Committee last July, the Office of the Speaker held a total of seven public hearings across the Navajo Nation and in the cities of Albuquerque and Tempe, Ariz. The public hearings allowed the public the opportunity to issue their recommendations as to how the Nation should use and/or invest the settlement funds.

In addition, at each public hearing we presented statistics to show the overall needs of the Nation in areas such as scholarships, water, electricity, capital improvement projects, roads, solid waste management, and law enforcement. Below is a summary of the needs as provided by various tribal divisions and programs:

Based on this information and the results of the public hearings, the needs of our Nation far exceed the settlement funds. Therefore, it is critical that Council address this matter with upmost prudence in which we maximize the benefits for our People.

In relation to the program projects or service-oriented projects, with 46 percent of the overall recommendations, the public overwhelming recommended that funds be used for scholarships and educational purposes.

To see the complete report and results from each public hearing and overall, go to www.navajonationcouncil.org.

Legislation has been introduced to establish the “Naabik’iy‡t’’ Sh’hasin Fund Subcommittee” whose task will be to develop a plan and eventually to develop legislation to address how to use and/or invest the settlement funds.

Additionally, the task force will have to consider many other items including whether the projects or services will require re-occurring costs, the possible establishment of an investment policy should the Council decide to proceed with investing any portion of the funds, and the development of a mechanism to drawdown funds for projects or services.

The legislation calls for the subcommittee to present a report to the Council by the summer session in July and to present a final version for consideration by the fall session in October.

This will be a process that will take time as we proceed with caution to ensure that we remain consistent with our Nation’s laws and policies throughout the legislative process. Our People are well-aware of the many needs of our Nation and it is Council’s intent to maximize the benefits for our communities.