A couple of months ago I found myself embroiled in a battle with this Texas girl, who attends Tarleton State University, and who owns a little online boutique with a hard to ignore site name. 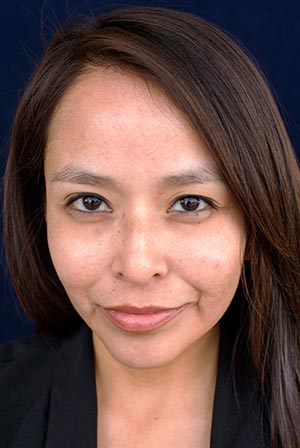 At first I found her choice of site name “Spunky Squaw” disgusting. And of course her site name pegged my curiosity to look into what she has as merchandise.

I went from curious to infuriated in all but seconds when I saw that she was selling shirts and referring to them as “Navajo Nation Extended” or “Navajo Nation Tee,” making customers believe her stuff was affiliated with our tribe, in order to reap the benefits of her ruse.

What angered me even more was the promo photo I saw of this haughty young woman, Brooke Adams. She stood there wearing a shirt that reads “Powered by Whiskey,” with a big smile, and her blonde hair covered by a feathered headdress and wearing huge turquoise earrings.

This image playing into the stereotype of the drunk Native, and as a Navajo woman who has made it a point to live a sober life and has never drank alcohol, this stereotype made me even more indignant.

My instinct was to blast her like hundreds of rightfully upset and insulted Native and Indigenous women, which I did. But blasting someone with $2 words can only go so far.

Remembering that the Navajo Nation fought a good and hard battle against the retail Urban Outfitters over their use of “Navajo,” I knew Adams use of our name could get her into trouble legally.

It wouldn’t work just to tell Adams on social media that she was being offensive and racist – that seemed to fuel her even more. I’d have to go about it the only way Caucasians understood, and that was by way of the legal system.

So I notified our Department of Justice and Attorney General Ethel Branch and within days they sent Adams a cease-and-desist letter, because not only is “Navajo” trademarked but Adams’ use of the name violates the federal Indian Arts and Crafts Act.

This, for me, was more than a success. It gave proof to any non-Navajos that we, as a tribe, are a force to reckon with and they should think twice if they choose to use our tribal name for any selfish gain.

But Adams is only one foe to fight when it comes to protecting our tribal name, culture and image. There are many other non-Navajos out there who abuse our name, history, culture, art, language, traditions and stories in order to profit. Adams is only one tiny speck to a huge problem.

You don’t have to go online to find cheap imitations of Navajo jewelry, rugs, or other form of art – just go to Gallup where many non-Natives have been ripping people off with fake Native art for years, and only recently the long arm of the law has been catching them.

We, as Navajo people, can no longer give up our tribal knowledge to non-Natives for free because it’s taken as permission for others to do what they like with this precious information and they will benefit greatly from it.

This knowledge has survived generations of conflicts, our ancestors placed it upon their young to continue on with it in hopes it thrives in the future, so why are we giving it up so easily to those who will distort it for personal gain?

If anyone should tell our stories and traditions it should be us, the rightful keepers of our tribe’s heritage.

While beaming with the news of Adams being served a cease-and-desist I was later confronted, on social media, by a young, Princeton educated Navajo man who works in Window Rock.

Apparently he knew of Adams backstory, he told me she’s engaged to a Navajo and was inspired, as though this was all the permission she needed, and how dare I try to bring her down.

He went as far as to call me “another jealous Native woman.” But, I’m sure by now he’s found out that Adams has found a loophole to affiliate our tribal name with the derogatory name of her boutique site, so he shouldn’t be too upset.

But this type of attack scares me. This young Navajo man isn’t offended by what Adams has called her site, he’s not offended that she stole our tribal name to sell her items – he’s offended by me, a Navajo woman, who is probably related to him by clan.

This proves we, as a people, have become so accustomed to having non-Navajos take what they want from our culture and stories without defense. We have accepted the narrative of the many harmful stereotypes laid upon us by the dominate society, and it’s out of the norm and pretty shameful of us to question any of this or to fight it.

We are Navajo, Diné, our ancestors fought to survive and by that they gave us invaluable knowledge, so that we too can fight and survive and pass this same knowledge to our younger generation.

We owe it to the resilience of the past to be a strong people of the future, and no non-Navajo should feel as though they are entitled to our tribal name, stories, language and traditions.