When I first met Kelsey Begaye, it was at a music festival. He walked up to me and said, “Hello, I’m Kelsey. That’s some good guitar playing you been blessed with.” 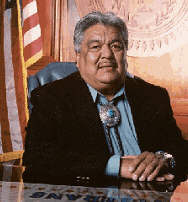 Right there we made friends. We talked guitars and how rock ‘n’ roll was changing all the time.

He was the first Navajo leader to acknowledge the musicians of the tribe and pay them to perform and feed them. He treated Navajo musicians with respect and dignity.

He stood up for the younger generation of new bands and musicians. He knew it was a real job for a lot of us. That’s how we ate and paid our bills.

Our leaders today say being a musician is not a real job and they never backed their own people the way Mr. Kelsey Begaye did.

When he was president, I saw him get electricity for a young, upcoming band in front of the tribal chambers. And he gave them water, too. He treated that young band of Navajo musicians good.

Once I was at the Navajo Nation Inn trying to sell artwork and CDs of our band, the Mother Earth Blues Band, and his staff was having dinner.

I said hi real quick. Next thing he asked me to join his table to eat and break bread. He told his staff to get this guitar player a place at our table.

That’s just how he was. No ego, no BS. Just a friendly guy who appreciated his people and his people’s talents.

I really miss hearing that in our leaders today — joobah, hozho, respect, honor, love, and dignity.

Mr. Kelsey Begaye, thanks for being a cool person and friend in music. As a Navajo musician, we lost one of our own.

Honored to have worked with Begaye

I was deeply saddened to hear about the passing of the Honorable Kelsey A. Begaye via the media over the weekend. My condolences to his family, other family members, and his congregation.

He called me “my son” during his presidency and speaker of the Navajo Nation Council, which I respected very much.

I normally introduce myself as being of the Kinyaa’áanii, born for Bįįh bitoodnii each time I addressed the Council when he was the speaker. He was of the Tódích’íi’nii Clan and my paternal clan is Bįįh bitoodnii, which is the same per the Navajo clan system.

He is the founder of the 2 ½% percent general tax of the Navajo Nation, which is allocated to the 110 certified chapters annually, a huge accomplishment in a short term. He touched all walks of life with his genuine kindness and generosity and he will be missed dearly.

I had the honor to work with him during his tenure as president of the Navajo Nation also. His philosophy of keeping the Navajo Nation Council members in check during Council sessions showed he was a true leader for the people and not himself. That is the kind of leadership that is missing in the current tribal government.

The last time I attended a meeting with him was the BIA budget hearing in Washington, D.C., in 2001 though the Navajo Region BIA director objected to my presence.

He was very instrumental with his presentation of the fiscal year 2002 budget. I attended the budget hearing to be on standby with the housing statistical information. Otherwise it was restricted to tribal leadership.

Kelsey A. Begaye has entered the spirit world where he is free of pain, hardship, and walking the beauty way of life. May the lord bless his family in easing the pain and may his ministry move forward from this day forward.

Again, my condolences to his family and congregation.

Driving through Shiprock is entering a Third World country. Abandoned governmental buildings, boarded up BIA structures from the 1950s, burned down stores, shops and gas stations, and litter along roads, store lots and gutters.

Shiprock tribal and state elected officials, where is the walk-in-beauty philosophy? Where is the concept of cleaning your area? Can the massive infrastructure monies or pandemic relief monies be used to remove these burned/abandoned buildings?

The Navajo Nation is truly blessed with natural beauty, but our guests leave with a trashy, Third world impression.

Elected state and tribal officials, please take a real look around. Bring home the images you see on your government travel, seminars, workshops, trainings, and meetings. Thank you.

People not allowed to voice concerns

The ineffective governance in Burnham Chapter has not changed since the most recent election and in some ways, it has gotten worse than before. The people are not allowed to voice their concerns or allowed to enter the chapter house when they should have access to participate in public meetings and use the emergency telephone.

Furthermore, the secretary/treasurer cannot even make decisions on her own. Every time she encounters a problem, she starts saying, “Leon, Leon.” It is so embarrassing for us community voters. The chapter had two meetings and both times the meetings were adjourned improperly by the chapter president.

On Aug. 6, 2021, a planning meeting was scheduled to validate two new CLUPC members. Unfortunately, Leon Spencer and Clara Pierce did not like the two selected CLUPC members because they are well-qualified individuals who would not act as lemurs to their self-interests.

In other words, they are assertive individuals who are more interested in performing their public duty instead of playing puppets to the currently elected masters. Both the chapter president and secretary acted childish, violated their oaths, and improperly adjourned the planning meeting.

The people were left unattended and the attending Delegate Ricky Nez, had to ask Vice President Smith to adjourn the meeting.

Additionally, throughout the meeting many of us were intentionally kicked off of the telephone conference by assumingly the office manager, Marlene Palmer, and Secretary/Treasurer Clara Pierce.

Navajo Nation tribal officials are supposed to work under Title 26 and the Five Management System. These procedures were not followed and so the certified voters of Burnham Chapter are being treated like animals by the chapter president, secretary/treasurer, and office manager.

Ultimately, the chapter president and secretary/treasurer logged off from the meeting without properly adjourning the meeting. Both told the community, “I don’t want to listen to this” and Clara Pierce further insulted the community voters as “jokers.”

The directors in Window Rock have all been notified and to this day, not one person has come forward to resolve any issues about the behavior of these two chapter employees. It is so bad that the people of TTS are scared to say anything. Leon Spencer, Marlene Palmer, and Clara Pierce record and document everything the community voters say to claim we are working against the chapter officials.

Then on Aug. 13, 2021, a formal chapter meeting was scheduled. Again, the chapter president, Leon Spencer, logged off without properly adjourning the meeting. This is clearly an “I quit this position” attitude.

Leon Spencer allowed his wife to submit a resolution to terminate the CLUPC president without a valid reason. The chapter president, his wife, his wife’s sister, her husband, and Secretary/Treasurer Clara Pierce’s sister and her husband all tried to motion a resolution without probable cause against the current chapter CLUCP president.

The chapter president, office manager, and secretary/treasurer handled this secretly without informing the general community. This is wrong. These chapter officials continue to violate their duties and obligations to serve the community.

Prior to this incident, the chapter manager is consistently rude with senior citizens in the community regarding various chapter facilities like the women’s restroom. Marlene Palmer went out of her way to yell at a senior certified chapter voter of Burnham Chapter. This senior citizen was hurt emotionally, heartbroken, and deeply saddened by Marlene’s behavior.

On top of this, the vice president walked in on Marlene yelling at this senior citizen who was trying to remain calm. Ultimately, Marlene Palmer accused the vice president of slamming doors, scaring the people in the office, and documenting false allegations with the presence of the grazing official and the abused senior.

The community has had numerous complaints about Marlene Palmer and to this day, Leon Spencer has allowed and favored her inappropriate behavior.

Currently, the elected officials chapter president and secretary/treasurer are both a danger to the public. Marlene Palmer is allowed to work in the chapter house when she violates the Navajo Nation’s Code of Conduct and Policy and Procedures.

This is bad for the community and I’m writing this to you to inform the broader general Navajo population regarding the ongoing behavior of one of our 25 LGA certified chapter houses.

I am hoping the leadership in Window Rock will be made aware of our qualms and help our community with these officials who are determined to destroy the community.

Water hauling plan is only a Band-Aid

We are a water-well-drilling company working out of Red Mesa, Arizona. We have called every number listed on the Department of Water Resources and numerous others trying to find out why they are spending millions of dollars hauling water to people’s homes and not drilling more wells.

This hauling-water plan is only a Band-Aid on a big problem with the drought still continuing. This problem is not going away soon.

We need to drill more wells and deeper than before to get more and better water to the people. We are not saying drill a well at each house, but drill more wells close to people, so they don’t have to drive 40 miles to get water, wait in lines, and hope the tank is not empty when they get there.

Also, with this COVID problem still going around we could set more tanks and run water lines for homes, livestock and farms. There is grant money out there to help with this and the chapter houses, grazing committees and other officials need to apply for them to open up the opportunity that is out there to help the Navajo people.

We were on the phone from 8 a.m., calling every number we could find. The people who did answer the phone would give us another number and by 1:30 p.m. we were back to the first person we called and no one could give us an answer or even tell me who to call and talk to about this.

We still call every day to Window Rock or Fort Defiance, and still have not got a call back, and their internet must be down because we emailed more people I can count and got the same response.

We have gone to meetings in Shiprock, and the people there told us the same thing — they can’t get the help or answers they need so the problems keep getting bigger instead of getting smaller.

Now NTUA is putting restrictions on water haulers, so where does that leave us?

There is an ongoing situation that could be construed as not honorable – the lack of road maintenance, repair, and/or road construction of the Bluff Road.

Here it is past mid-summer and time for students to return to school and the Bluff Road is still very rough and bumpy with few guardrails.

Are not any of chapter officials considering the safety of children riding the bus to and from our local schools?

The traffic on Bluff Road will not stop or slow down as many Shiprock residents live on the farms and need to travel to access different destinations daily.

What do Shiprock Chapter officials need to do to get the Bluff Road on a regular maintenance schedule?

There is new heavy equipment to work the road with, but they are idle and not being used. Why was this equipment ordered?