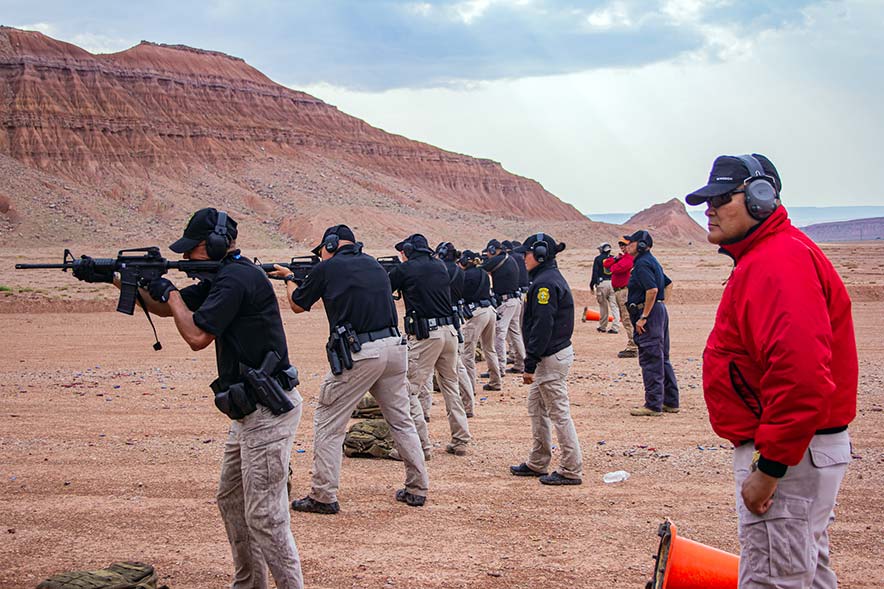 Navajo Times | Cyrus Norcross
Navajo Police Sgt. Marvin Curley, a firearms instructor, watches the recruits as they shoot from the standing position at the Navajo Police shooting range on Aug. 16.

Members of Navajo Police Training Academy Class 56 sit at their desks, eyes locked on the instructor going over traffic laws.

“We make sure we get qualified people in here to teach,” said Lt. Donnie Kee. “We partner with a lot of outside agencies. We got pretty good support both from our local, state and federal partners in order to provide training to these recruits.”

Kee, an Arizona Department of Public Safety instructor, taught the recruits how to recognize impairment in drivers, administer sobriety tests and to document impairment in police reports.

Kee retired from the San Juan County Sheriff’s Department on March 20 and applied for a lieutenant position at the Navajo Police Academy.

“I’m here to help out with whatever I can help with and push programs forward and develop new programs,” Kee said. “It’s been a good change. I’m looking forward to what I got here.”

Class 56 comprises 13 recruits from across the Navajo Nation and includes an individual who is a former legionnaire in the French Foreign Legion.

Smith learned of the Navajo Police in Tony Hillerman’s books.

“It seemed cool,” he said, “seemed like the Wild West, seemed like a lot of adventure, and it was a rough and wild place (Navajo Nation).

“That sort of thing appealed to me,” he said.

Having served five years in the French Foreign Legion, Smith is no stranger to experiencing new cultures.

“I look forward to serving the Navajo people,” he said. “In my spare time, I would like to learn more about the culture and the language.

“Hopefully in one to two years,” he said, “I can hold a basic conversation in Navajo. The culture seems like a fascinating culture.”

Kee said, “The goal is that they fit seamlessly in their districts and provide their services to the community in a safe manner.”

Her mother is a police dispatcher and when Navajo PD was stretched thin, her mother would call her father to help.

Morris and her father would help by setting up roadblocks for accidents, help people who got stuck and help officers when they needed it.

Morris said, “Academy is hard, and at times I wanted to quit.”

Her father gives her the inspiration to continue moving forward with her training.

Morris enjoys Kee as the new lieutenant because he not only motivates her, but motivates the class to have attitudes like lions.

“Every time he (Kee) talks, I feel like he is talking specifically to me and I feel like that’s how other recruits feel,” she said. “Because it’s physically, mentally and emotionally tiring.

“But in the end, it makes you stronger,” she said.

Since being in the academy, Morris said she feels stronger, more confident, and knows she has people she can rely on.

Kee said, “Safety is important not only for officers but for the citizens.”

At the start of the academy, recruits take a class on interpersonal communication.

Kee said, “They respect citizen’s rights, provide services that they are obligated to provide to the citizens of the Navajo Nation.”

The expectation for recruits is to communicate efficiently during highly stressful events, such as vehicle accidents, shootings and other traumatic events.

The standards for the recruits are high. Class 56 started with 24 recruits and is now down to 13. The attrition rate is what it is due to injury, personal issues and failing the academic standards.

Kee said, “The expectation is that these officers do their jobs, safely, legally, and ethically, without lowering the standards.”

Police Recruit Elijah McCoy, from Kayenta, served in the Marines for four years and wants to continue to serve her community in uniform.

“He doesn’t back down from what he is doing,” McCoy said. “Once he has his mind set on something, he doesn’t give up and keeps going.

“The biggest thing was that he took my sister and I, and mom in, when our biological dad left us, and has raised us since,” she said. McCoy’s military training has helped her during the academy.

“Being in the military taught me that, regardless of who you are, how old you are, or where you come from, you are no better than anybody else,” she said.

As the new lieutenant at the Navajo Police Academy, Kee said, “My goal is to produce as many qualified officers as I can.”

With his experience, Kee strives to build on the academy’s curriculum and help move it forward with a new perspective.

“It feels good,” he said. “I like the idea that I am here to help move stuff forward. To bring a different perspective based on my training and experience.”

Kee is excited about what the future holds for the Navajo Police and its ability to make safer communities.

“That’s the ultimate goal when we come in and provide training to these recruits,” he said. “The ultimate goal is to provide safer communities. So that the people of the Navajo Nation can prosper.”