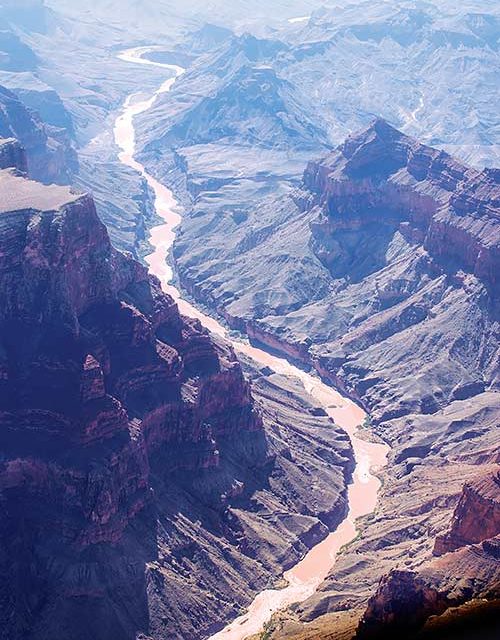 Navajo Times | Adron Gardner The Colorado River, seen from an EcoFlight plane Wednesday, runs muddy near its confluence with the Little Colorado. The site is under consideration for a major tourist development, the Grand Canyon Escalade.

He said, “Most Council delegates support the Grand Canyon Escalade.”

Navajo Times File Photo | Adron Gardner
The Colorado River, seen from an EcoFlight plane, runs muddy near its confluence with the Little Colorado. The site is under consideration for a major tourist development, the Grand Canyon Escalade.

Well, who are they? Give us a delegate list of supporters. This needs to be clarified.

Next is the so-called “non-compete zone.” The 15-mile radius from the Escalade center to the outlying area includes the town of Cameron. Except for the gondola tramway this small town has all the other type of operations mentioned by Whitmer. If and when the Escalade goes into full-scale function, does the town of Cameron close down its restaurants, hotels, RV Park, general store and gas station?

Third is the issue of the $65 million that the partners are requesting from the Navajo Nation. This amount of money is intended to build a road from about milepost 874 on Highway 89 north to the Confluence point of the two rivers, the big Colorado and the Little Colorado. The dirt road is NN 6132. And the partners say that this will benefit the local people with the road, electric lines, and water.

It sounds great, but the people who live in the area don’t want the Escalade. The project amounts to loss of traditional livestock grazing land, pollution from sewage, trash, noise (to name a few examples of destruction) and unwanted visitors gawking at the people and their way of life.

This part of the east Grand Canyon is sacred to us. One of the delegates who supports the project said that there is no written law that declares certain areas as sacred. There was a picture of Mr. Whitmer being blessed by a medicine man at the Confluence. There are sacred sites.

The project has not gained a foothold in its long process for approval. For example, livestock grazing permit holders have not approved the project, which is required for land withdrawal.

Fourth is the issue of taxes and money. Will the partners pay taxes? No. This would be the responsibility of the Navajo Nation. When the project goes down in bankruptcy, who picks up the tab? The Navajo Nation!

Here’s an analogy: Let’s say I borrow a concho belt from you, which I pawn for money. Over time I can’t get the belt out, because I don’t have the money. Since you are the owner of the belt, I ask you to pay the outstanding amount.

There are many other issues and questions connected to this ill-conceived project. My advice is to ask your Council delegate at the next chapter meeting. They have the original bill that was negotiated between then-President Shelly and the partners.

Bill sponsor Bennett wants to convene a task force to re-negotiate the master agreement. But that may not happen because President Russell BegayeÊis against the bill. The Council does not have the authority to negotiate with the partners.

I am disheartened by the continuing saga of politics taking precedence over common sense. I do not know Crystal Deschinny, other than she has an MBA in business administration and decided to take on the very difficult task of reforming a department (Business Industrial Development Fund) that has had significant past mismanagement. 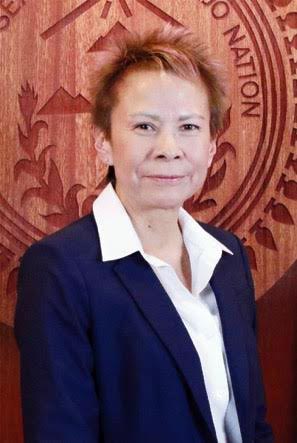 According to Navajo Times articles, Ms. Deschinny took over in April 2016, a mere 16 months ago. Given the 15 years of “carelessness when it came to the loan service program,” I was surprised to learn that a Council delegate wanted her removed so soon.

As a tribal financial manager and consultant, I can confirm that cleaning up years of mismanagement of a poorly functioning accounting department can easily take up to one year. Given 15 years of “carelessness” in this case, 16 months is nothing.

Before accepting consulting projects that aim to clean up years of bad accounting, I always try to communicate, “not to expect too much too soon.” All too often, tribal leaders expect years of mismanagement to be cleaned up overnight. That, I am afraid, is unrealistic.

I was prompted to write this letter to the editor because of a statement made by Council Delegate Davis Filfred quoted in the Navajo Times, Page A2, dated Aug. 17, 2017. It reads as follows:

“I don’t know what I’m going to do with all this data. I think we have enough data. I’d rather hear a report saying ÔHey! Look at what we built!’ To me, this is another pile in my car that I will not read into.”

I was stunned to read such a statement from an elected leader. To outright say that he is not reviewing information and further recommending termination of an individual, demonstrates a lack of leadership and common sense. He is expecting several years of mismanagement to be resolved overnight, and consequently punishing Ms. Deschinny for not doing so.

Might I suggest that it was the tribal Council/government that allowed 15 years to go by without addressing problems within this department? Why?
I also recall in a past Navajo Times article that Ms. Deschinny’s pay was reduced related to the 2009 Corrective Action Plan audit not being implemented. In the same Aug. 17th Navajo Times article noted above, Ms. Deschinny is quoted as saying to the Resource and Development Committee, “You are well aware of what has been going on. This is not a project that has been sitting idle.” To blame one individual for this issue is ridiculous.

It seems clear to me that Ms. Deschinny simply needs more time to correct the deficiencies in this department. I think it would reflect well on the tribal leadership if she was given the chance to do so.

This is a nightmare bedtime story. Once upon a time in a kingdom far away in the Southwest desert, there lived a people known as Navajos. They were a rich, healthy and happy people and there were no poor among them.

In the kingdom lived many Navajo subjects and the people had good kings. The Navajos of the kingdom were peaceful and their kings listened to them when there were problems to solve.

As the years passed new kings spent the gold without care and soon there was very little gold and the kingdom became poor.

The Navajos of the kingdom told the king to “stop spending the gold” rather it should be saved and only used for things that were really needed. To spend the gold everyone would need to agree and approve the spending. The gold was never to be spent foolishly. All the people agreed, and all were happy.

In the passing years the amount of gold grew as it earned interest. It grew until it was worth over two billion in gold.

New kings and the king’s men never told the Navajos of the kingdom how much gold there was in the castle. The new king, the king’s men of the court wanted to spend the gold for many foolish projects.

To get the gold the king’s court had to have the approval from all the poor subjects of the kingdom.

The king’s men planned to offer to the poor of the kingdom new roads, or to repair all roads, for they needed the poor’s approval to spend the gold.
Navajos of the kingdom were never told that their approval for spending on roads would include many added riders on their approval and much of the gold would be spent very foolishly, until the gold was all gone.

With many Navajos of the kingdom living in poverty, with their kings stealing from them, they had little hope. Hope was the only thing they had left. Can they ever all live happily ever after?
The end.

Re NHA, Yazzie: I told you so!

By now more effective responses may have been submitted for publication regarding the above-referenced article (“HUD report clears Yazzie, clears misconceptions,” Aug. 28, 2017), but I am submitting for publication my humble “I told you so” bit.

Navajo Times File Photo  | Ravonelle Yazzie
The Navajo Housing Authority development in Pigeon Springs, New Mexico is seen in 2016. At the time, Navajo Nation Council Delegate Jonathan Hale wanted to designate another entity to receive grant funds, as he says NHA has not built houses in years and is in danger of having to return money to the federal government.

I am getting so old and decrepit that I forgot when it was that I pleaded that there be mercy on the honorable Navajo Housing Authority forced-to-resign Aneva Yazzie, the ousted NHA board, and their supportive staff who too were publicly condemned for allegations of corruption and mismanagement of NHA.

Now HUD of Washington, D.C., reports that its findings are that the reason alleged to justify slandering, libeling and removing the NHA board are without grounds.

What now that character assassinations and layers of damage have been done to innocent individuals who were donating their time and lives?

An apology to them has been mentioned, but it seems that all targeted in the condemnation are due more to re-establish lives in more than one situation.

So, if the powers that be, who did the damage on the basis of gossip, do nothing, perhaps one of the victims will move for a class action lawsuit as the bilagaanas would?

Thank you for hearing me out from the sheep camp level.