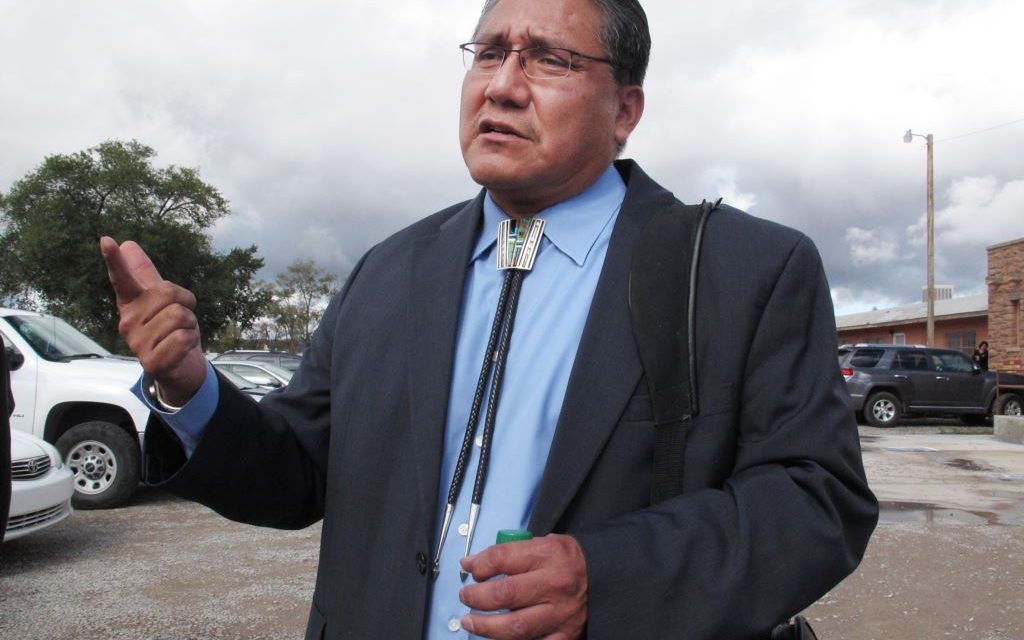 I have a suggestion I would like to share with my Diné voters in resolving the issues associated with the presidential election.

Whoever the successor should be needs to work hard to amend the current tribal laws to coincide with the changing generations in the years to come, constitutional form of government is ideal and is the best thing that will ever happen to the Diné Nation. And place a referendum before the voters and make the chief justice, associate judges, attorney general, and director of election administration elected positions.

On the flip side it sounds like the two spoilers, Dale Tsosie and Hank Whitethorne are at it again. They are throwing in the monkey wrench into the presidential process. I can just imagine the kind of leadership they will have in causing more devastation and division among the people if one of them was elected as the president.

Finally, how about electing David Jordan as the president and Justin Jones as the vice president since they want to be involved in every step of the way. Thank you.

Questions that need to be asked regarding Fundamental Law

The recent petitioners brief filed by David Jordan and Justice Jones, on behalf of Dale Tsosie and Hank Whitethorne, presents serious questions and observations on the use of Navajo Fundamental Law in the political turmoil facing the Navajo people. These questions (among others) should be asked by all Navajo people upon reading the petitioners brief that is being considered by the Navajo Supreme Court justices in their deliberations.

* Who are the “cultural experts” who advised Mr. Jordan and Mr. Jones (Tsosie and Whitethorne)? This is important to establish the credibility of the use of Navajo Fundamental Law in their brief to the Navajo Supreme Court.

* …The allegations that Deschene formulated a political coup with the Council are allegations. There has been no discovery process to determine the veracity of the allegations. The Court is precluded by judicial procedure from giving any legal consideration to “hearsay.”

* 8. Whether Deschene speaks Navajo “fluently” is yet to be determined. He did not take the test; a default judgment was issued never determining whether Deschene is fluent. The argument that Deschene violated Navajo law is without merit.

* There is no mention of the doctrine of “Sovereign Immunity” as it applies to the official government actions taken by political leaders of the Navajo Nation during a Navajo Nation government council session. As such, the argument must overcome a very serious argument. More troubling is the direct attack that the petitioners wage against the legislative branch of the Navajo Nation government, and their argument the Navajo Supreme Court should overstep its authority by holding Navajo legislative leaders in contempt and to be banned from office, thereby disabling the law making body of the Navajo people during a critical time in our nation’s contemporary history. The alleged protectors of Navajo law and government are now seeking to destroy Navajo law and government.

* Furthermore, the selective use of Diné Fundamental Law makes the petitioners argument deeply troubling. In the practice of western law, attorneys adhere to legal doctrines, statutory and case law to make their argument. While there is the means to make an argument, to develop legal theory, and to distinguish the law, there is the requirement that the law cannot be arbitrarily selected, disregarding important case or statutory law, in the development of an argument. The laws that may be counter to their argument must be addressed and distinguished. They cannot be selective in their argument, disregarding important case or statutory law as if they merely didn’t exist. The petitioners and their attorneys have done so in their petition.

* The petitioners’ use of the deer and coyote story cautions, “…[Y]ou cannot adopt someone else’s way and reasoning for doing things.” And yet, they seek to use western legal adversarial “way and reasoning” for arguing against the Navajo Nation Council’s legislative measure signed into law by the president, to arbitrarily apply a fluency standard where none has existed in Navajo culture previously. What of the political process that is now being used to determine leadership, or of the money that changes hands between the petitioner and their attorneys for services provided? Or of the legal argument that is being employed? Are these not “someone else’s way and reasoning for doing things”?

* If the “…concept of balance, equality, through mutual respect, love, empathy, protection, was on of the first natural laws created and established to serve as the foundation of the rest of our Fundamental Laws,” as stated in the petitioners’ brief, why is it then that we seek to segregate Navajo speakers and non-Navajo speakers from holding elected office? Why then do we have disrespectful characterization of Navajo lawmakers as coyotes? Where is the empathy in the harsh political debate and the name calling? And where is the protection of Navajo votes for both candidates Joe Shirley and Chris Deschene?

* The petitioners and their attorneys, David Jordan and Justin Jones, and by their political use of the Navajo Supreme Court, threatens to usurp the vote of Navajo people who elected Council members to represent their interests before the Navajo law making body; interests such as the recent Navajo legislation establishing new election dates and pardoning the board of election supervisors.

* “Deschene cult.” The petitioners and their attorneys characterize Deschene and people who seek a change in leadership and a fair and inclusive election of Navajo leaders as a “cult.” Nothing in the petitioners’ argument aligns with their lofty goals of re-establishing Hozhooji. Rather, they perpetuate the imbalance and disharmony through their ugly characterizations of Navajo people, elders, youth, and families who seek to support their leadership.

An honor to serve as Miss Central Teen

I am 17 years old and I am a junior at Chinle High School.

It is an honor for my family and myself that I hold the title of Miss Central Navajo Teen. My platform has been teen suicide prevention. It is something I am passionate about. Every life is precious and should not be taken for granted.

I would like to thank my family, friends and the public for their continued support throughout my reign as Miss Central Navajo Teen. I appreciate all the words of encouragement and the teachings of I received. I will continue to represent my family and my Diné people in the best and most positive way. Ahéhee.

Not in the public interest of the Native people

I am a tribal member of the San Carlos Apache Tribe and it’s ironic how the Oak Flat Land Exchange Bill was enacted into law (December 2014) through a “rider” on the National Defense Authorization Act when USDA Secretary, Tom Vilsack, wrote in 2009 to Ron Wyden, chairman of the Energy and Natural Resources Committee, that this area was considered “unique and significant natural and cultural qualities of lands to be conveyed and the lands to be acquired. These lands of historical, cultural and environmental significance are adjacent to Apache Leap and Gaan Canyon are located on the Tonto National Forest. These areas are considered sacred places to the Apache and Yavapai tribes and are used to conduct religious ceremonies. Gaan Canyon is a perennial stream and an ecologically significant and riparian area.”

Where is the Environmental Impact Statement under the National Environmental Policy Act? Where is the consultation with the San Carlos Apache Tribe? NEPA has statutes that set forth prerequisite obligations before a federal action is taken.

Executive Order 13175 directs each federal agency to consult with American Indians that have substantial direct effects on one or more American Indian tribes relating to “consultation” and “coordination” with tribal governments.

The 2004 Forest Service Manual requires that tribal rights and interests must be consulted with by the Forest Service on matters that affect tribal rights and interests to ensure compliance with the laws and executive orders, especially with regards to establish laws that protect areas of significance to Indian tribes that are located on National Forest System lands.

The San Carlos Apache Tribe, along with other tribal governments, have raised concerns that the land exchange bill was contrary to crucial policies and executive orders that require Federal Land Management agencies to protect and preserve sites that are highly sacred to tribes. Therefore, Oak Flat has been the focus of historic government protection and it is important that tribal meaningful consultation is conducted to ensure tribal participation, especially to ensure proper protection of this site.

Resolution Copper Company proposes to use 18,000 per acre feet per year and 1 acre feet of water is 325,853 so that means that they will use 5,865,354,000, which is almost 6 billion gallons of water per year. Water is precious. Water is life. We must all do everything we can to protect our water.

Finally, their action was definitely not in the public interest of American citizens across the nation.

The district has been informed by the Navajo police, who were present at the scene when the accident occurred, that the driver of the vehicle was cited for DUI. The driver of the school van was not cited for any improper driving.