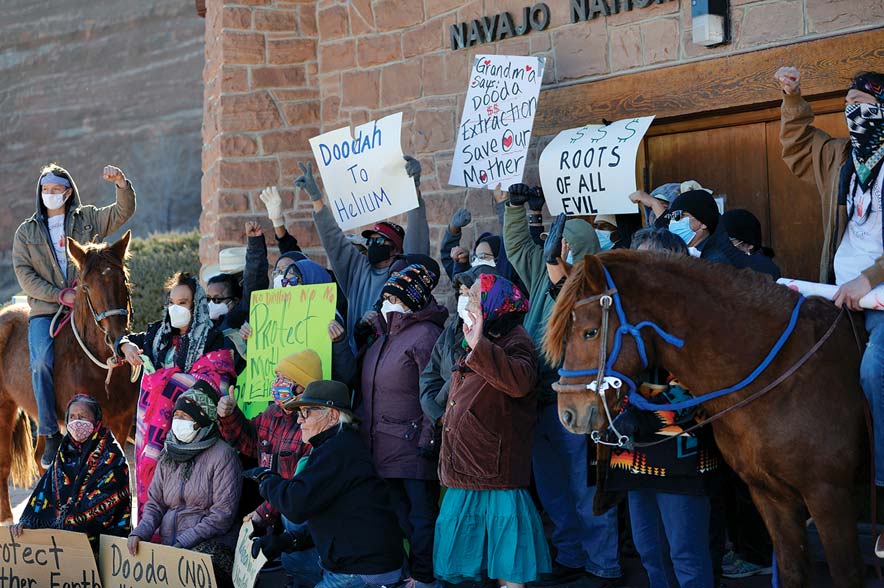 This week I wanted to share my thoughts on an Oct. 22, 2022, NBC News article titled, “The world is running out of helium. Here’s why doctors are worried.” by Caroline Hopkins.

The fact that doctors and hospitals are worried about the shortage of helium should worry us all. Hopkins writes that the country of Russia was supposed to provide one-third of the helium but with the ongoing war with Ukraine those shipments have stopped and have no date of returning to the market.

The article says that hospitals will see more rationing of the helium. That means hospitals will have to help their patients with a fixed amount of helium.

For those that are unfamiliar with the uses of helium, helium is used to cool MRI magnets. Magnetic Resolution Image machines provide high resolution images to see details in the body. According to Hopkins, the “MRIs help doctors diagnose brain tumors, strokes, spinal cord injuries, liver diseases and cancer.”

MRIs are in use every day on the Navajo Nation. Most of us on the Navajo Nation don’t see the cost for the use of an MRI. In AZ for one website(honorhealth.com), the prices ranged from $846 to $2,054 based on level of contrast and section that is being examined. Keep in mind the price is without physician fees.

We should pay attention to it because we use it and we can help. The Navajo Nation has this valuable resource within its boundaries. And it is naturally evaporating into the atmosphere.

The Navajo Nation has the resources to capture this helium before it evaporates into the atmosphere and offer this resource to the world to help others and ourselves. And perhaps, earn some revenue.

Not only would hospitals be impacted by the rationing, but the medical research conducted at universities would be impacted as well. Rationing would limit how much universities receive and use.

The other important industry that uses helium is the semiconductor companies. Yes, those tiny components that help our phones and laptops function. That would be rationed too.

We can help by allowing our Navajo Nation Oil and Gas Company (NNOGC) to produce Navajo helium. Opposers are telling people that helium will kill you or that NNOGC will dig a hole so big that it will swallow your livestock. These messages are wrong and create distrust.

We should remember that Navajo Transitional Energy Company (NTEC) purchased a company that is producing helium on the Navajo Nation already. Why are the opposers not protesting there? Are the livestock located there being swallowed up by the helium production?

Stop by and see their production. There is a NTEC sign beside the road. But there are no protesting signs, no large holes, and no protestors. Cows visit the site frequently. Go see it for yourselves.

NNOGC have the expertise, knowledge, and know-how of where to find this valuable resource and produce it safely. We just need to support their effort because when we support them, we are supporting those valuable industries that need it. And it will financially help the chapter communities that have the helium resource.

Here is another article you can read if you need more information about the helium shortage. “How the Helium Shortage Will Impact Your Healthcare,” written by Forbes Magazine senior contributor Bruce Y. Lee.

Be careful who you believe.

At last, at last, our Bluff Road in Shiprock, New Mexico, has been paved! Repeated letters and petitions have finally proved effective as well as input from Council Delegate Newton, President Nez, and the Shiprock Chapter.

On behalf of the Bluff Road residents, I want to thank all who worked to get our road paved after decades of neglect.

Now to complete the project, there are still some safety concerns to be addressed. Such safety items include guard rails at the cliff edges, speed limit signs, caution signs, and speed bumps. Everyone who travels on this road must be mindful that the paved Bluff Road is a farm road with pedestrians, bicycle riders, and slow-moving farm equipment. A paved road with double yellow lines does not mean passing other vehicles. There are speeders racing up and down in their cars and pickups forgetting that they need to practice caution. Additionally, we need to be proud of our newly paved road and not throw trash along the road, use the public trash dump on the north side of Shiprock past the IHS compound.

The paving of the Bluff Road is one of the movements toward improving the Shiprock Community as well as working streetlights and future debris removal of debilitated buildings. With the incoming Navajo Nation President Nygren, I hope other progress is realized like gravel pits for other road maintenance and a police station. Again, thank you for paving the Bluff Road.

At the same time, they are doing damage to the earth and putting the future of our grandchildren into great peril.

It is proven fact that extractive energy development is the greatest cause for the climate crisis. The climate crisis is not an if-sometime-tomorrow situation, it is here and now. Some say, including our traditional knowledge people that it is too late to stop the devastation of the planet, that all we can do is get ready for the coming hard times.

I don’t hear many Navajo leaders being critically concerned with the climate crisis, they are too bizi scurrying around pushing their projects and doing the same old, same old.

Do we have a bunch of climate crisis deniers in Window Rock? The coming hard times are told of in our ancient Diné stories, they are contained in the holy book. Are our ‘leaders’ disbelievers of their faith, of their spiritual understandings?

One thing my Dad told me was “if you know something is going to end in a certain way, don’t just stand there and watch it happen, do something!” Any acts we do whether it be littering, burning our trash or exploiting the earth for energy development all contribute to the damage being done. Clearly our Navajo leadership is complicit and contributing to the devastation. And clearly there are some of us who will not just stand by and watch it happen.