Newcomer will bring wealth of experience to 25th Council 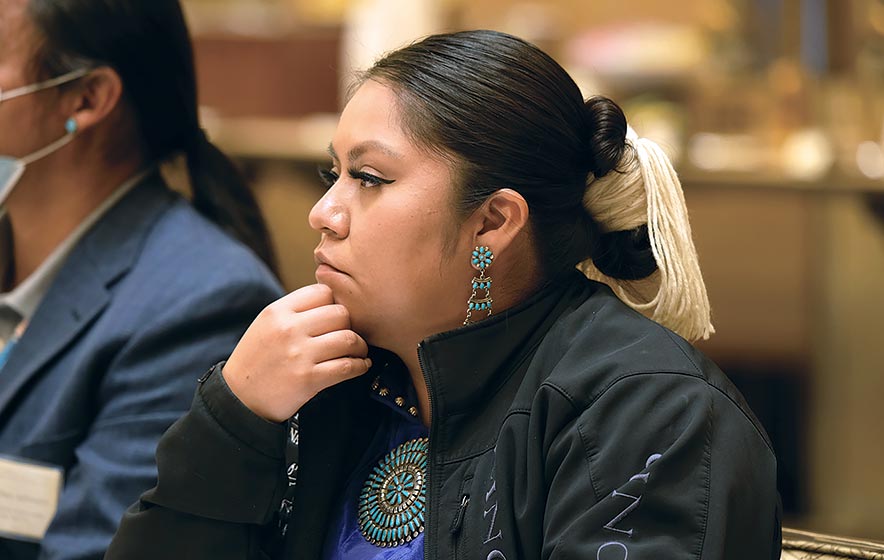 The 25th Navajo Nation Council will have its first-ever youngest member sworn into office Jan. 10.

She will represent Chilchinbeto, Dennehotso, and Kayenta in 33 days.

Already, she’s begun work on what she intends to accomplish in her first 100 days in office, which is not micromanaging what the chapters have already done regarding their plans to spend the ARPA funds.

“As a newly elected Council delegate, who is first-time elected into this position, that it’s important to respect that the plans that have already been in place,” she said of the chapters and their plans to spend the ARPA funds. “The chapter houses already have a comprehensive plan in place.”

Parrish said that she and the chapters ensure they have the “proper pieces in place” until she is officially sworn in.

“After the oath of office, we can fit the rest of the puzzle pieces in place and then support not only our projects but ensuring we’re most effective across the Navajo Nation because most of the people on the Navajo Nation, we all face similar issues and if we can address those issues effectively that would be ideal,” she said on Nov. 28, while attending the 25th Navajo Nation Council Orientation.

Parrish may be the youngest Council delegate to serve, but her credentials read anything like it.

In 2015, the soon-to-be Miss Navajo interned in the Arizona State Senate for three years. Later she became the public information officer for Arizona State Treasurer Kimberly Yee. She received her bachelor’s in political science from Arizona State University in 2018 on a Gates Millennium Scholarship. A year later, she decided to vie for the coveted Miss Navajo title and won the crown in 2019.

Then the COVID-19 pandemic came, hitting Chilchinbeto, one of the communities she’ll represent as its councilwoman. But in 2020, Parrish was serving Navajo communities and helping distribute food and other essential items to Navajo families. One community that benefited was Ganado. In June 2020, Parrish directed traffic that would rival a New York City Police officer directing traffic on a busy day.

The arrival of the highly contagious respiratory disease also meant it would cancel everything, including the Navajo Nation Fair, held in September. The cancellation of the fair meant she’d have to continue representing the people as Miss Navajo. So, in September 2020, Parrish continued reigning as Miss Navajo, the first-ever titleholder who would serve two years in a row. In September 2021, Parrish finally gave up the crown to Valentina Clitso.

Since the Miss Navajo office was an executive branch, Parrish stayed as a staff assistant in the Jonathan Nez and Myron Lizer administration alongside another “sister of the crown,” Crystalyne Curley.

Curley also ran for Council delegate against Kee Allen Begay and defeated the longtime public figure and Army veteran. Curley, also a newcomer to the political arena, will be representing Low Mountain, Many Farms, Nazlini, Tachíí-Blue Gap, and Tséłání-Cottonwood chapters when she takes the oath of office.

At the orientation, Parrish was glad she was attending because it allowed her to meet and mingle with the other newly elected delegates.

The Navajo people made sweeping changes and ousted 16 members of the 24th Council. Navajo voters also added nine women to the Council – a first-ever in its long-storied history that was always a male-dominated Council.

At the orientation, she told the delegates that, as Miss Navajo, she had a chance to visit all of the chapters.

“So, I think that I have a great perspective in that way and understanding through my experiences as Miss Navajo that we all are facing similar issues and that we all need to work together to get that legislation passed for our people,” Parrish said.

For her chapters, specifically, some of the projects that will be addressed are damming restorations and improving roads. She added she was also discussing ongoing projects with Navajo Division of Transportation executive director Garret Silversmith that has been going on for the last four years.

“I think it’s a big part of the transition,” she said.

Another project Parrish is already working on getting a better grasp on as a delegate-elect is the reclamation of Black Mesa concerning Peabody Coal Mine.

Peabody Coal Mine, the largest coal company in the world, according to an Aug. 2021 story by Krista Allen, destroyed more than 20,000 acres of Navajo and Hopi lands. Since closing in 2019, Allen reported the mining company had yet to begin reclamation efforts.

Parrish also mentioned economic development as being a top priority.

“Chilchinbeto has a huge plan for their C (convenience) store and also for their museum. And Dennethotso has hopes for restoring their chapter house because that’s a huge community center-point for their community,” she said.

She has been talking to outgoing Council Delegate Nathaniel Brown as well, she said.

“We’ve had a good talk about transition,” she added.

Being a first-time delegate, Parrish said she is familiar with some of the processes of how the legislative branch operates because of her work as a legislative district assistant for former Council Delegate Jonathan Hale, who left the council to pursue his education. In addition, she’s been getting insight from Otto Tso, the current speaker of the Council, and her soon-to-be colleague Herman Daniels Jr.

Parrish feels her experience working in the executive branch gives her a perspective – except for Curley – all of the incoming members of the 25th Council do not have.

“I think both Crystalyne and I are the only delegates that have executive branch experience,” she said.

For the next 48 months, Parrish plans to use the experiences she attained at the state and executive levels and during her work as an LDA for Hale.

“Time is limited when you’re an elected official, and the best way to make use of that time is to be decisive and effective and to also be a good decision-maker,” she said.

Parrish is originally from Kayenta. She is Kinyaa’áanii and born for Tódích’íi’nii.