Áshinee’: ‘Behind a good man is a strong woman’ 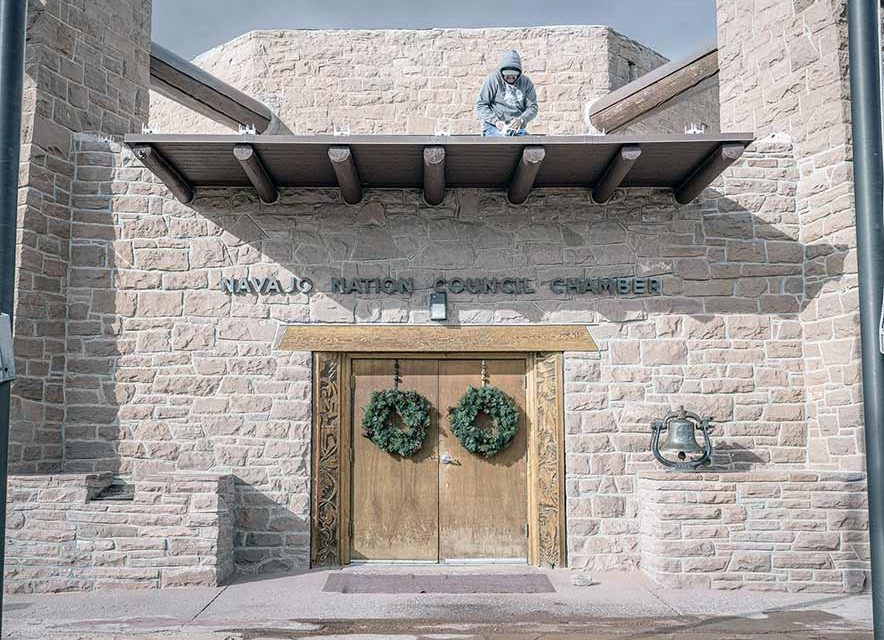 The three women on the 24th Navajo Nation Council were constantly interrupted by their male counterparts. But that’s all about to change.

They weren’t meant to take leadership roles, but their nomination for office by their respective communities seems to have shattered the notion that ‘asdzą́ą́n doo naat’áanii doo da dooleeł da. That’s a taboo in the Nation’s matrilineal society, according to traditional beliefs.

The Nation has a strong reverence for ‘asdzą́ą́n as caretakers and heirs to everything from the hooghan to the dibé/łį́į́’. But in the 1950s, Diné voters put a woman to the test when they voted public health activist Annie Dodge Wauneka to the tribal Council.

“A lot of families, they look toward the mother or the grandmother when they need guidance and help,” said Claw of Ch’ínílį. “So, based on that, I do see that this shift from male leadership to female leadership shows that our Diné are wanting comfort, and through their vote, they elected nine (women) to the Navajo Nation Council.”

“In that way, it’s very significant,” she said.

Many Diné ‘asdzą́ą́n are leaders across an array of disciplines, from education to health care and politics – and more – across Diné Bikéyah. They often find themselves facing off with the male executives and finding common ground. And it’s not unique.

Diné ‘asdzą́ą́n in upper ranks can become a sticking point. Her voice may go unheard, and her ideas may be overlooked, among other things.

Jennifer Nez Denetdale, a Diné historian and professor of American studies at the University of New Mexico, has said Diné men had sought the advice of ‘asdzą́ą́n who weren’t allowed to the negotiation of the 1868 Naaltsoos Sání between tribal and federal naat’áanii since the late 1860s.

Helena Nez Begay, who’ll represent Bodaway-Gap, Coppermine, LeChee, Kaibeto, and Tonalea-Red Lake, said while hastóí in leadership may be seen as decisive and assertive with a solid authoritarian style, they will always go home and get advice from their wives.

“Behind a good man is a strong woman,” Begay of Turtle Rock Ranch, Arizona, near Kaibeto, said in an interview in Navajo. “We women are tough and can withstand the rigors of life, including verbal torment. That’s just how we women are.

“Even giving birth to a child, we go through all this labor, and the men don’t see it like that,” she said. “Then grandmothers teach, shiyázhí she’awéé––áshinee’. Even those words, you can heal that child. Whatever they’re going through, you’re going to uplift them. You might even change that person with (those) words.”

While some Diné ‘asdzą́ą́n in leadership may find it hard to gain respect, Claw says she has a different perspective.

“Because women have always been leaders,” Claw said. “When you think about the oral history of the Diné, we have Changing Woman (‘Asdzą́ą́ Nádleehé) who was a leader in her way.

“The woman guides the clan (dóone’é), the children, and we serve as the peacemaker within the family,” she said. “When there’s trouble, they turn to the eldest of the women (in the family). Women are the ones who are actually naat’áanii when it comes to the home.”

The reason for the current flurry of activity is that in the past, Diné ‘asdzą́ą́ should not lead outside their families, and only Diné men could do it.

Bilagáana photographer Milton Snow’s black and white photograph depicting a congregation of Diné hastóí – béésh bąąh dah si’ání – talking inside the Council Chamber hangs inside the speaker’s office. There are no women in the photo.

But the nine ‘asdzą́ą́n elected seem to have the same rhetoric: that it’s possible. And that Diné ‘asdzą́ą́n will continue to rise higher in the tribe’s leadership and perhaps be depicted in a historic photo like that.

“As far as (vice president-elect Richelle) Montoya, I think that it fulfills the paradigm of tsi’ąh naagháí bik’eh hózhóón,” Claw said, “which is there’s always a counterpart, there’s a balance.

“With (president-elect Buu) Nygren and Montoya, there’s a male and a female. That’s the balance. When he picked her as his running mate, a lot of women saw that they’re going to have a voice––it’s the completeness of being a team.

“I saw the need for women to really get involved (in) politics,” said Claw, who’s been with Chinle’s Diné Youth for 26 years. “We are opening the doors. All of the women who’ve decided to run for Navajo Nation Council, I believe they are reopening the doors.”

And go back in Diné history to when Lilakai “Lily” Julian Neil, the first Diné ‘asdzą́ą́n elected to Council and fought for the rights of her people.