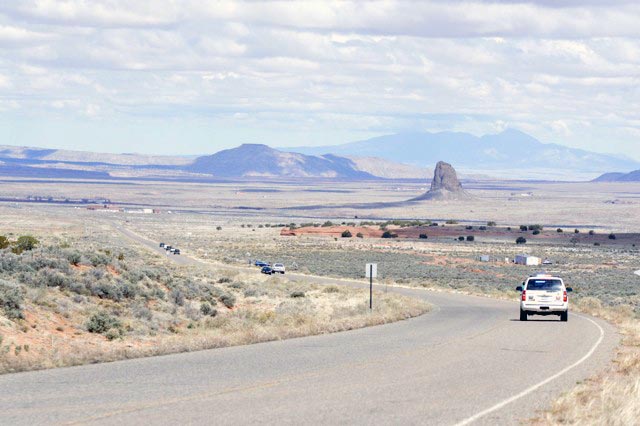 A procession of police officers from various police agencies escort fallen brethren, Navajo police officer Alex Yazzie, on Navajo Route 13 in Cove Red Valley, Ariz., on Friday afternoon. According to information released by the Navajo president's office, officer Yazzie was shot and killed during a shootout with domestic disturbance suspect Justin Fowler Thursday night. Two other officers were also shot each in the leg and taken to the hospital for their injuries. Fowler was also killed. (Times photo - Donovan Quintero)

The recent killing of a Navajo Nation police officer inspired me to write this letter.

First, my deepest condolences to the family of Officer Alex Yazzie and prayers for the recovery of the two wounded officers. What caught my attention were the comments of an unidentified officer stating this killing could have been avoided.

The lives of our Indian officers serving on our vast and isolated reservations are in danger everyday. Most of us are only concerned for an immediate response of an officer in time of need. Unfortunately, today it is a common practice for a lone officer covering several square miles of the reservation 24/7. This has far too long been an acceptable practice.

Our Native American police officers are no match to persons with assault rifles and protective gear equipped with only a pistol. Even if our officers are equipped, they are serving our communities with no backup that is readily available in urban areas.

Concerned that my calls are not being answered by the BIA Justice Services officials, I learned that most of the command officials are unfamiliar with isolation factors on our reservations. This is compounded by not knowing our lifestyles and coming from reservations which lost almost all of their past traditions, including languages.

Yet, we are subjected to their oversight and use of our federal dollars for Indian country. I recommend to the Navajo Nation to demand a complete congressional investigation into the Office of Justice Services. The assistant secretary of interior for BIA is from Oklahoma, including his Justice Services Director Cruzan, Assistant Director Thompson and Phoenix Western Region Agent-In-Charge Matthew Pryor. All this information is available on the BIA Justice Services website.

More information and documents are available to support my allegations. I proudly served as a former Hopi police official, Hopi tribal chairman, and assistant to Northern Arizona University president. I will support and assist any person or organization to initiate a congressional inquiry and hearings into the inadequate funding and questionable leadership of our federal agencies.

All entrusted to provide for an efficient and effective use of our limited federal congressional funding to provide for the protection of lives and property on our reservations. This I write freely and knowing of my past and continued retaliatory actions against my family.

The recent council action of having a referendum before the Navajo Nation presidential election of April 21 is basically out of order. It is not in the best interest of the nation to do this. It is meant to divide our people and cause disharmony. It also goes against the Supreme Court’s memorandum decision of Dec. 16, 2014, and the most recent order.

In the 1986, election I uncovered widespread election fraud on Election Day. Former Chairman and President Peterson Zah was the victim. In his re-election bid, Assistant Attorney General, Eric Eberhard, and I presented our findings to him before his concession speech that night.

We watched him make a painful decision. Being a real man he stated that he was not going to challenge the results and “divide” the people. He walked the other way and later was voted in as president in 1992. The 1986 victor got caught up in the 1989 turmoil.

This makes me wonder on this push for a referendum. What unholy and dirty deals have been made and what kind of scandal will we the people get caught up in?

Remember, history repeats itself. I would request our people be in prayer and vote the referendum down.

When I proposed the Emergency Bond Financing Legislation to the Navajo Nation Council for the first Navajo-owned casino I did not intend to be taken for granted.

The purpose for the legislation was to generate money so all Navajos could benefit from the revenues from the casinos, but so far I haven’t seen anything yet. No detailed budget has ever been publicized and so where’s the money?

Publication of revenue from the Navajo-owned casinos should be on a monthly basis.

Since the opening of the Fire Rock Navajo Casino, Churchrock Chapter has not yet been allocated any revenue back to the community. A lot of promises have been made, but since then has been all talk. The Navajo people keep Fire Rock Navajo Casino in business year-round just as Navajo Arts and Crafts Enterprise.

The Gaming Enterprise should’ve stayed focused on building the permanent Navajo casino at Superman Canyon Road by Gallup, instead of building a Navajo casino in the middle of nowhere near Flagstaff, which is not bringing in any revenue to the Navajo Nation.

The Navajo Nation casinos create a lot of frustration due to losing hard-earned money and money that the elders get from first of the month which could be spent on more important things rather than making the pawn shop, the liquor stores and loan companies rich. The casinos also lead to marital problems, drinking, domestic violence, and health issues from secondhand smoke.

In conclusion, we all need to wake up and question ourselves, “Is the Navajo casinos a good choice we made?”
Let’s all get together and ask this question. I need your suggestions and input. Start sending letters out to your elected officials and not only at the tribal level, but also at the state and federal level. We need resourceful input on how we can better manage the casino revenue for the Navajo people before it’s too late.

In opposition to Kirkpatrick’s bill

I could be accused of yelling, “The British are coming, the British are coming” , like Paul Revere, but I suspect the purpose of Representative Ann Kirkpatrick’s recent visit to Hopi and Navajo is to start clearing the way for foreign corporations to do business on tribal lands. She is using Bennett Freeze and relocation issues as a vehicle to promote her Legislative Bill H.R. 5039. She knows that the work of the Office of Navajo — Hopi Relocation Commission is a failure, so the solution is to bring in capitalists to solve the problems of unemployment, infrastructure, revenue, etc.

In a worst case scenario, if her bill is enacted into law, it will clear the way for development of a proposed Escalade Project by waiving federal laws that impede the process. This will open the door to desecration of one of the most important religious shrines in the world and the surrounding cultural landscape.

It could do away with or dilute federal laws and regulations under the Clean Air Act and Surface Mining Control and Reclamation Act making it easier for owners of Navajo Generating Station and Peabody Mine to operate until 2044 when NGS will be permanently shut down as a coal fired station. It could shut down as early as 2030.

The presidential candidates for office of the Navajo Nation should be asked how they plan to replace 1,000 Diné jobs and revenue that will be lost when NGS operation and Peabody mining ends.

I hope I am wrong, but I need to express my concerns because I have learned from 25 years of political experience that the federal and state governments, business corporations will mislead you to get what they want. They will seduce you with promises of jobs and money. They will sympathize with you, but in the end they will swallow you, body and soul. We, the Hopi and Diné, are already in the belly of the snake. Wake up!
Cleaning up the Relocation mess and thawing out Bennett Freeze area is our responsibility. We, the Hopi senom and Diné, have the solution to create a permanent, safe and sustainable home for future generations. But, we first need to take control of our natural resources and take advantage of our rich and vibrant human resources.

Kirkpatrick’s Band-Aid solution is the wrong approach and for that reason her Bill must be rejected.

As the Indian Junior Rodeo Association approaches its 40th birthday on April 12, I want to say happy birthday and thank you to the officers (adults and youth), youth membership, parents, communities, sponsors, rodeo officials, stock contractors, media such as Navajo Times, business award sponsors, Navajo Nation Council, Honorable Navajo Nation Council Delegate Nelson S. BeGaye for his support and past funding, and all those that make IJRA today. What a journey!
It was April 12, 1975, that I got my family and friends together in Kayenta, and started IJRA. In the intervening 40 years, literally thousands of youth, parents, officials all that I mentioned earlier made IJRA.
Today they continue to work with youth tirelessly. IJRA in many ways is not just livestock care, but our youth develop responsibility, respect, character, confidence, and believe in self, focus on tasks and school, helping at home, involvement, being drug and alcohol free, sportsmanship and self-esteem building, and becoming competitive in their respective events.
Many are taking their developed skills to the next level. IJRA has developed so many youth since 1975, and are fine adults in their community today. So many are educated and champions in their own right. These and many more were original goals.

What I have envisioned has come to past our young people like Spud Jones, Erich Rogers, Cassidy Dennison, Arron Tsingine, and Derrick Begay qualifying for and competing at the National Finals Rodeo. There will be many more. It’s great to see this in my lifetime.

The volunteer work of so many in working with IJRA youth, I can’t say enough “thank you” . It was so great to see the recent article on IJRA awards night recently in the Navajo Times (March 5, 2015). Congratulations to all and thank you. Keep up the good job IJRA!

Referendum is a step In the right direction

(I want to) praise President Ben Shelly for signing into law the referendum legislation passed by the Navajo Nation Council on March 13. Some 40,000-plus Navajo voters have been held hostage for almost a year by their own Supreme Court.

March 20 was a good day for the entire Navajo Nation and its voters as a result of President Shelly’s once in a lifetime historical event signing the referendum into law. The referendum is now law and the Supreme Court Justices needs to respect it and not mess with it. It’s a sacred document.

The referendum is a step in the right direction of beginning a healing process of some 40,000-plus Navajo voters whose votes were invalidated by the Supreme Court. The invalidation is a serious violation of our civil rights guaranteed us by the U.S. Constitution. The Supreme Court Justices needs to honor our right to vote for a candidate of our choice.

On the other hand, it’s frustrating to hear about the rumor that the sour apples from the middle of the nation are already trying to entertain a motion to invalidate the referendum. David Jordan and Justin Jones need to mind their own business and find something else to do in their own territory. They have caused enough devastation to our tribal government.

In light of the new development, I urge the Navajo voters to vote yes on the referendum when time comes. Thank you for allowing me the opportunity to express these concerns and other issues at hand.