Letters: Is Trump a bozo or the Joker? 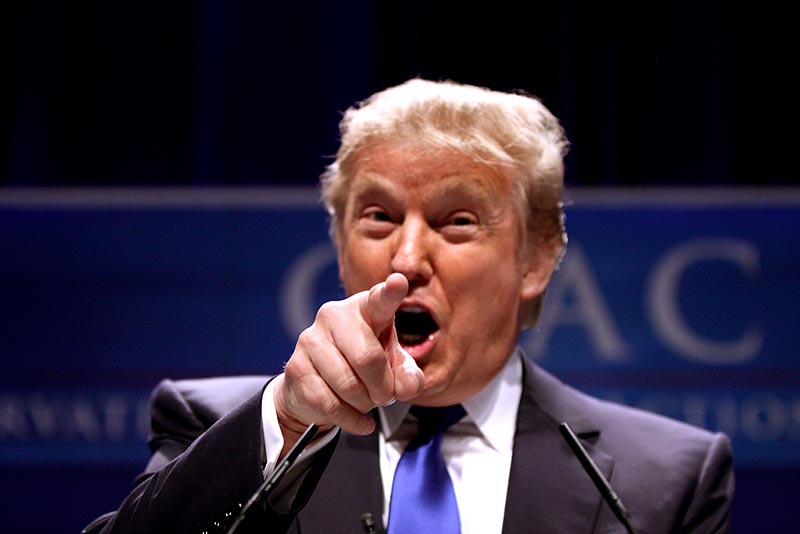 This is an eminent concern focusing on the crisis we are facing in this country caused by President Donald Trump, which includes racism, senseless name-calling and the violence that is happening. His attack on U.S. Rep. Elijah Cummings and four presidential candidates in the Democratic Party is dumbfounding, inhumane and unacceptable.

The president recently called the Democrats clowns. That comment leads me to question is he the bozo or the Joker? He needs to re-examine himself and perhaps seek psychiatric help.

At the rate he’s going, calling people names makes him unfit to be the president of this great country. Also, I would like to say he reminds me of Barney on the Flintstones cartoon show; he’s goofy. He has gone as far as to tell one of the presidential candidates to go home to where she came from. If someone had to be told to go home to where they came from it should be the Native people saying it. And he should take the lead and all non-Natives can follow.

That’s the only way there will be peace on earth. The recent killing in El Paso, Texas, and Dayton, Ohio, appears to be nothing new. He told the nation and the world it’s the result of hate and mental illness and fell short of pointing to the fact he’s behind violence. The gun manufacturers and sellers should be held responsible for putting military assault rifles on the market. That’s because they support him by millions and millions of dollars.

The frustrating part of his visit is the comment he made about the Democrats by saying it was only a few Democrats protesting his visit among the mourning crowd. This man makes me sick to the max.

The killings and politics shouldn’t be mixed. He’s not serious about his trip and it’s just a joke to him. It is crystal clear he is unfit for the presidency and why some of the Democrats on the hill have been dropping the ball to impeach him is ridiculous. It makes me wonder if the Democrats are hiding some classified information from the American public and voters.

He needs to be impeached without further ado before he declares himself a permanent president like the dictator of North Korea. Yes, this man should be ashamed of himself because he’s a sex maniac, groping women in public places and having sex with them for over 100 grand a shot.

There should be a federal mandate that requires a comprehensive background check on all presidential candidates in the future. Common sense tells me military assault rifles were intended to be used in combat zones. I am hopeful our congressional leaders will act on passing a comprehensive background check and make the military assault rifles illegal for public sale.

And the president needs to stop quaking and sign it into law. Thank you.

Two little jawn boys traveling with Mom and Dad for a good purpose to help load and watch the big two-year-old sheep tied up in the back of the truck, which was purchased to butcher back home to feed the family.

On the way home, Mom wanted to stop at City Market to get some ingredients. Dad trusted the two boys to watch the sheep while they went shopping inside as they parked towards the back in the parking area.

The boys agreed with courage saying, “Yes, we can, Dad,” as they played with their candy and soda. Couple minutes goes by and then one happens to look back and notices the sheep is gone. The oldest one quickly gets out and starts looking around saying, “Come quickly,” as they looked around and behind other cars.

As they walked closer to the store, he says, “There!” Right in the front of City Market’s sliding doors there stood the sheep. Knowing it can outsmart the two boys as they both got closer it moved to the right and left and left again, faking which way to run. “Grab his legs,” he said, as the sheep jumped up and over one and heads towards the parking area, running in between cars, getting away. The two boys struggled to keep up, finally cornered it, grabbing and pulling it back to the truck. Only problem was the sheep was too big and heavy so they couldn’t pick it up.

A big Navajo guy, watching the two boys chasing the sheep around the parking lot, gets out of his truck laughing and asks, “You boys need help?” Sweating in the heat, they both shook their heads.

He made sure the sheep was well tied up not to get away again. Exhausted from running, they shook his hand, got back in the truck and sat like nothing happened. Mom and Dad got back and we headed out. As we pulled away we looked back at the Big Navajo Guy smiling and being thankful for his help.

Mom and Dad would never find out.

There is nothing like activists working hard to shut down a mining operation and then criticizing the inevitable layoffs that occur when the shutdown happens. Yet that’s exactly what local activists and IEEFA — an activist masquerading as a think tank — have done in a brazen move of hypocrisy.

During the effort the keep the Navajo Generating Station and Kayenta Mine going, many stakeholders stood with Peabody to protect good jobs, tribal revenue and affordable energy.

I was there through the whole process and saw how this Ohio-based group and others advocated for closures that would lead to the loss of 800 jobs. Don’t be fooled by their recent attempts to make us think they are sympathetic to the miners and their families who are about to lose their jobs. Their intent was always to shut down the mine and power plant.

The honorable Speaker Bates said it best: “Navajo energy resources empower our sovereign ability to care for our people the way that only we can.” He recognized the “empty promises made” by activists, noting that after several Navajo mines were shut down in recent years, activists quickly disappeared. Beyond the lost jobs and revenues, Navajo people are asking where they will get coal to heat their homes and coal to support their families. We can be sure that IEEFA will never create a single job or one dollar in revenue for the Navajo Nation. They will move on to close other facilities and force more people to lose their valuable jobs. They convinced our lawmakers that closure was the best thing for the Navajo people.

Now they’re even pressuring lawmakers to revisit the energy policy, which will eliminate more jobs. It’s time to tell our lawmakers to stop listening to their so-called reports before more of us lose our livelihood. Beware of the wolf dressed in sheep’s clothing.

It is clear that both the president’s office and the Navajo Nation Council are on different tracks when it comes to energy.

At the last Council session, Council moved the discussion of energy back to Resources and Development Committee with clear instructions to come back with a plan to address the Navajo people’s input and to address declining revenues. The president without a lead energy person stated he established a working committee to address energy with the assistance of Salt River Project, even though Council clearly told the president to organize and establish the Energy Task Force Committee, which will report back to RDC and Council with its recommendation.

RDC has ultimate authority over natural resources. The question is, what is SRP’s motive? SRP did offer to assign one of their managers to lead the president’s renewable energy efforts.

Once again SRP stated it will need access to those transmission lines across Navajo land in order to make it work. This all occurring without the Navajo Nation Council or its standing committee RDC’s input. What’s interesting is President Nez stated that he received input from the Navajo people to move down this path.

At the last Budget and Finance hearing a question arose about energy dollars. The question was very clear: “How much royalty and taxes has renewable energy provided to the Navajo Nation coffers after nine months of the administration?” The answer was clearly zero to date. The people are starting to ask the tough questions about renewable energy as the chapter budgets get cut and services to the people decline.

Council once again is also asking the president why SRP is leading Navajo Nation energy efforts. Is it because they still need access to those transmission lines across Navajo Nation and need to cut a deal? More to come.

Lastly, was there already a deal between SRP and Navajo Nation to close NGS, to give the transmission line to SRP? They are hoping to place solar panels/windmills across our beautiful nation. With all the power and energy all going into the grid and not to our people?

A note for NCC alumni

I am a doctoral student with Fielding Graduate University, located in Santa Barbara, California. My research focus is, “How Navajo Community College (now Diné College) has Impacted the Local Communities.” I am seeking alumni, former faculty and former administrators from 1968 to 1988 with Navajo Community College to complete this survey. Please share this letter information with other potential survey participants for this time period.

The survey is very brief and will only take about 10 minutes to complete. Please click the link below to go to the survey website or copy and paste the link into your Internet browser: http://www.surveymonkey.com/r/2SSPFRN Your participation in the survey is completely voluntary and your responses will be kept confidential.

No personally identifiable information will be associated with your responses to any reports of these data. Fielding Graduate University Institutional Review Board and the Navajo Nation Human Research Review Board have approved this survey.

I am also willing to meet and interview potential survey participants, if Internet service is not available. Should you have any comments or questions, please feel free to contact me at merlee.arviso@fielding.edu or arvisoresearch1@gmail.com.