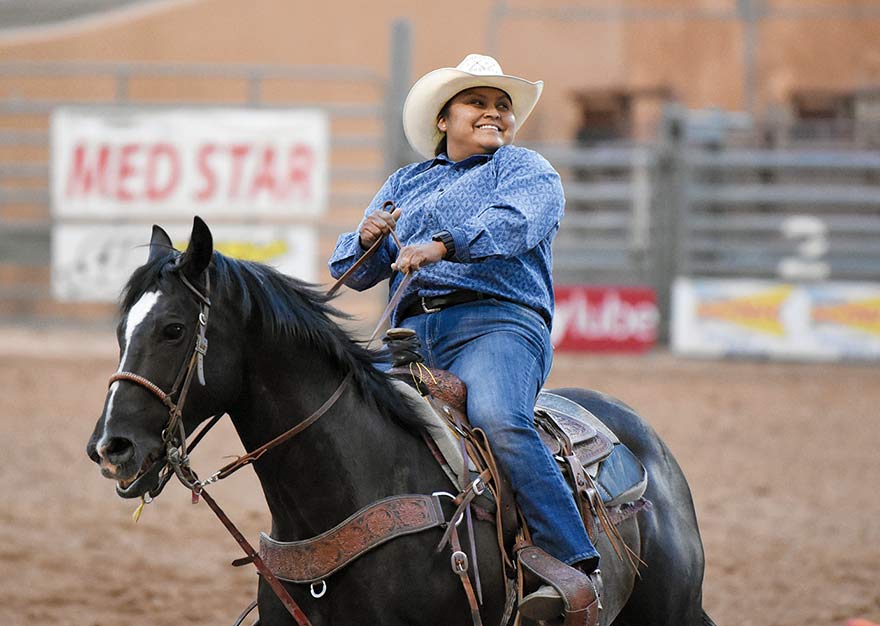 There’s a nasty little cliché that makes every teacher cringe: Those that can’t, teach.

It happens to be untrue, as two cowgirls who are also educators proved last Wednesday at the Gallup Inter-Tribal Indian Ceremonial’s Iron Cowgirl Challenge.

While it’s not uncommon for cowboys to take a season off to heal from an injury, Odessa Yazzie had just taken three years off to get her master’s degree in athletic training at Weber State University before plunging back into the rodeo world this summer. At the Iron Cowgirl Challenge, she came back with a bang — literally, as thunder provided a fitting soundtrack to her expert ropework in the competition, which involved breakaway, tie-down and team roping and barrel racing.

Yazzie is the athletic trainer and sports medicine teacher at Gallup High School, and the second-place winner, Reneille Sells of Rough Rock, Arizona, is a first-year elementary school P.E. teacher in her hometown.

One would think this would give them some street cred with their students. After all, who’s going to argue with an Iron Cowgirl? Sells, who also won the women’s all-around title in the open rodeo on Sunday, doesn’t know about that, but several students did say, “Hey, we saw you at the rodeo,” she said. “I only had one kid say anything, and it was a kid I didn’t even know,” said Yazzie. “I guess they’re not that into rodeo.”

Yazzie broke out strong with a time of 2.97 in the breakaway and just kept coming. One of the few cowgirls to actually tie her calf in the tie-down, she handily won that event as well, her time of 18.66 besting Taniah Nez, who came in third in the overall competition, with a 27.22 and Sells with 29.32.

A sudden thunderstorm proved a bugaboo for all the competitors, most of whom got a no-time in the second roping event. Yazzie, unnerved by a sudden clap of thunder just as she was entering the chute, took a few seconds to compose herself before charging out, completely drenched.

“Rain makes it hard to maneuver, because your wet clothes stick to the saddle,” she said.

Sells found it difficult to see as large raindrops pelted the arena. “I just concentrated on throwing my rope and hitting my calf,” she said.

Yazzie proved less handy with the barrels; her time of 25.943 did not make it in the top five. Sells did a little better with 20.831. But the fact that the women competed in all four events put them ahead of several cowgirls who opted out of their worst event.

“I haven’t barrel-raced since probably high school,” Yazzie confessed. “But I knew if I wanted a chance at the Iron Cowgirl, I’d have to compete in all the events, so I got on Rooster’s roping horse and did my best.” (Rooster Yazzie, Yazzie’s brother, is another celebrated Navajo cowboy.)

Yazzie and Sells, who had emerged as the closest competitors, then became partners in the team roping, turning in a time of 12.41. Both in their late 20s, their experience was on full display as they showed the younger competitors how it’s done. They were the only team to successfully rope the head and both back feet of their steer.

Sells could have thrown off Yazzie’s lead by deliberately missing the steer, but it never occurred to her even after her brother off-handedly suggested it. “We go way back,” she said of Yazzie. “I greet her as my sister (Sells is Naaneesht’ézhi Táchíinii born for Tó Dichíinii; Yazzie, who is Kin Yaa’áanii born for Hashk’aa Hadzohi, has Táchíinii as her third clan.) Plus, I’m just not that kind of person. Sportsmanship is big with me.”

Sells said she was satisfied with her second place against “some very competitive cowgirls.” While the weather made for a slim crowd, the cowgirls shrugged it off and said they were grateful to compete in the Iron Cowgirl. “Not many rodeos put up an event just for the ladies,” noted Sells. “I’m grateful to everyone who helped put on this event,” echoed Yazzie. “Most of us (cowgirls) know each other, and it’s really fun to compete with your friends.”